Environmental carcinogens, such as 7,12-dimethylbenz(α)anthracene (DMBA) are released as a result of incomplete combustion and are responsible for a number of deleterious effects in the body.1,2 This carcinogen has been associated with the onset of skin, breast, and liver cancer in animals and has been used as a model compound for laboratory experiments.3-5 Several studies have reported the nephrotoxicity of this carcinogen.6 The genotoxic nature of this compound causes DNA alterations and thus it acts as a serious threat to the different organs of the body.7 Kidney, being an important site for the elimination of xenobiotics (excretion of phase III enzymes), is often prone to serious challenges. A number of anticancer drugs have been introduced in the market as potential solution against this disease. Although effective at certain level, these drugs have serious side effects ranging from low blood count, tiredness, and loss of appetite to nerve damage and infertility.8,9 The limited efficacy along with wide range of side effects thus makes it necessary to find an alternate medicine.

Medicinal plants are the most potent alternate due to their wide range of phytochemicals, such as alkaloids, flavonoids, phenols, and glucosinolates.10 Among these, glucosinolates and especially their hydrolytic product (isothiocyanate) have unparallel bioactivity. These compounds have the potential to act as an antiinsecticide, antioxidant, herbicide, antitumorogenic, and anticancer compound.11 A number of isothiocyanates have shown promising anticancer activity, but sulforaphane has surpassed their activity and is currently under clinical phase trials as an anticancer drug.12 This compound when ingested in the body gets readily interconverted to 4-methylthiobutyl isothiocyanate (4-MTBITC).13 Although an analog of sulforaphane, 4-MTBITC has not been extensively evaluated for its renoprotective activity. With this in light, the current study was designed to evaluate the efficacy of 4-MTBITC against DMBA induced nephrotoxicity in male Wistar rats.

The permission to carry the current research on animal models was duly taken from Committee for the Purpose of Control and Supervision of Experiments on Animals (CPCSEA), Ministry of Environment and Forests, Government of India, Guru Nanak Dev University, Amritsar.

Albino male Wistar rats (8–12 weeks) weighing 100 to 200 gm were selected for the current study. Animals were housed in polypropylene cages with a bedding of paddy husk and were kept at ± 25°C and 12 hours light:12 hours dark period. Standard pellet diet and water was provided ad libitum. Rats were divided into five different groups with six rats each and the study was carried for 5 days. Following the completion, blood was removed using retro-orbital puncture and serum was collected. The untreated control group was administered with corn oil (i.p.) as per their body weight and the negative control group was administered with DMBA (20 mg/kg) (i.p.). The treatment groups were injected with DMBA (20 mg/kg) along with 4-MTBITC (20, 35 and 50 mg/kg bw) (i.p.). The compound 4-MTBITC was isolated as described in the previous study.14

Evaluation of the renoprotective activity of 4-MTBITC against DMBA induced toxicity was done using different serum parameters. The levels of creatinine, urea, sodium, and potassium were analyzed using Siemens Dimensions RXL. The levels of these by-products and minerals are maintained through a complex homeostatic pathway involving the major function of kidneys. These parameters are therefore true representative of the renoprotective activity of 4-MTBITC.

The creatinine content in the current study was elevated following the treatment with DMBA (2.654 mg/dL), pointing toward nephrotoxicity induced by the mutagen. The treatment with 4-MTBITC, on the contrary, significantly reduced the damage induced by DMBA (0.981, 1.022, and 0.766 mg/dL in groups III, IV, and V) (Graph 1A). The urea level was elevated in the DMBA treated rats group in contrast to the untreated control (79.157 mg/dL in DMBA treated group and 53.581 mg/dL in untreated control). A significant reduction in the urea content was observed following the treatment with 4-MTBITC, pointing toward the renoprotective activity of this compound (Graph 1B).

The level of blood sodium was significantly elevated in DMBA treated rats (344.118 mEq/L) in contrast to untreated rats group (217.647 mEq/L). The treatment with 4-MTBITC significantly normalized the level of this mineral and brought the level closer to the untreated control (Graph 2A). An elevated level of blood potassium was seen in the negative control (DMBA treated) group (9.680 mEq/L), pointing toward renal damage induced by the mutagen. The treatment with erucin, brought the level of this mineral closer to the untreated group, thus pointing toward the protective role of 4-MTBITC (7.835, 6.755, and 6.115 in groups III, IV, and V) (Graph 2B).

Graphs 1A and B

Graphs 2A and B

The study involved the analysis of bioprotective efficacy of 4-MTBITC against DMBA induced nephrotoxicity. This important isothiocyanate has been well evaluated as a hepatoprotective agent against both genotoxic and nongenotoxic chemicals.15,16 Liver being the prime site for the metabolism of the different xenobiotics is prone to different oxidative stress.17 But the phase II xenobiotic enzymes metabolized by liver into phase III xenobiotic enzyme needs to be eliminated from the body using its interaction with kidneys. This association, therefore, makes it necessary for evaluation of the effect of a carcinogen and its counteraction by protective agents on kidneys. Analysis of the various serum parameters makes it the most suitable and minimally invasive procedure for analysis of the effect of a drug on kidneys.18,19 The level of serum creatinine is a direct reflection of kidney functioning.20 An increased level of creatinine in DMBA treated group points toward the toxic effect of this compound. On the contrary, erucin significantly protected the animal against this stress. Another important parameter is blood urea level, a breakdown product of proteins, readily eliminated by kidneys. It was observed that erucin imparted protection to male Wistar rats against DMBA induced stress, as seen through the normalized urea levels. In a similar study by Nabavi et al,21 the renoprotective activity of Allium paradoxum was observed in gentamicin induced renal damage in mice. The study involved the measurement of blood urea and creatinine level.

In addition to the different by-products, analysis of the content of blood minerals is also crucial, since kidneys play an important role in maintaining their balance. The two most crucial minerals present in the blood and responsible for maintaining the normal functioning of muscles and nerves are sodium and potassium.22 An imbalance in the sodium level is an indicator of electrolyte imbalance in the body, hinting toward the kidney damage. The elevated level of sodium in the DMBA treated group indicates nephrotoxicity induced by the mutagen.23 The level of this mineral was brought back closer to the untreated group in erucin treated group, thus indicating the bioprotective activity of erucin. The level of potassium is also crucial for the normal functioning of the body. An elevated level in DMBA treated group indicates the toxic effect of this mutagen. In contrast, erucin treatment provided significant protection to male Wistar rats, as observed through the normalized levels of this mineral in the treatment groups. A number of studies indicate the importance of blood potassium as an indicator of renal damage.23

The genotoxic mutagen DMBA is known to induce oxidative stress in the organism.24 The oxidative stress is induced by the downregulation of the transcription factor nuclear factor, E2-related factor 2 (Nrf2).25 This transcription factor, in turn, alters the activity of various antioxidant and xenobiotic enzymes.26 Moreover, DMBA is also responsible for the formation of DNA adducts, which prevents the normal functioning of an organ.27 The isothiocyanates in general have the ability to prevent the DNA adduct formation and thus they play a key role in preventing mutagenesis.28 In addition, they break the association between Nrf2 and kelch like ECH associated protein 2 (Keap1) present in the cytoplasm of a cell. This helps the movement of Nrf2 into the nucleus and thus obviates the different antioxidant enzymes, including phase I and II enzymes.29,30 The current study therefore highlights the bioprotective activity of 4-MTBITC as seen through the normalization of different serum parameters in DMBA treated rats (Graph 3). 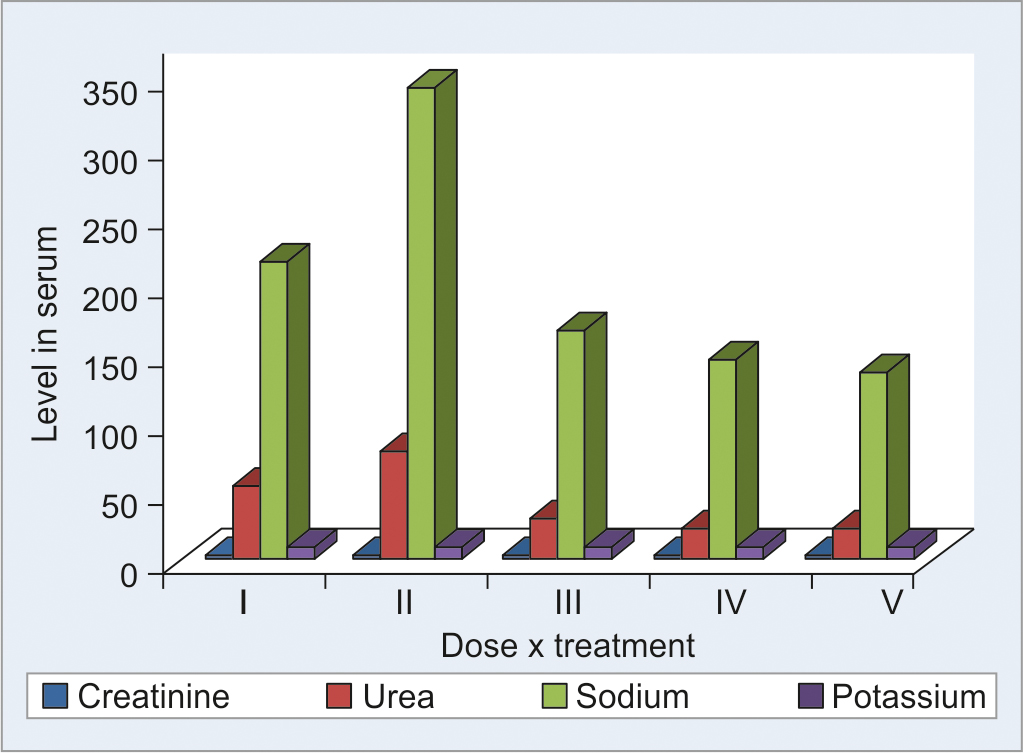 Glucosinolates, and especially their hydrolytic products, have unparallel biological activity in contrast to the different plant phytochemicals. They have the ability to protect an organism against deleterious diseases induced by different environmental carcinogens. The current study has shown the bioprotective activity of 4-MTBITC against DMBA induced nephrotoxicity in male Wistar rats as measured using different serum parameters.