The etymological roots of pharmacovigilance are pharmacy and vigilance from the Greek words Pharmakon = Drug and Latin = Vigilare, which mean “To keep awake or alert, to keep watch” and “To keep watch on drugs, in particular, their safety.” The World Health Organization (WHO) defines pharmacovigilance as the pharmacological science and activities relating to the detection, assessment, understanding, and prevention of adverse effects or any other drug-related problems.1,2 Consumers, health care professionals (HCPs), pharmaceutical companies, and global regulatory agencies play a significant role in the process of pharmacovigilance. Pharmacovigilance has evolved from largely a record-keeping function, where the purpose was mainly to ensure the processing and submission of individual case reports, to the present, where it now focuses on proactively identifying safety issues and taking appropriate actions to minimize and mitigate risk to the patients. This review highlights the process of pharmacovigilance in adverse event reporting and its impact on patient management and safety.

Pharmacovigilance: Past and Present

In the early 1900s, the US Food and Drug Administration (FDA) focused mainly on regulatory enforcement on foods that were thought to pose a greater public health problem. However, in 1938, the Food Drug and Cosmetic Act brought cosmetics and medical devices under the control of the FDA and required that drugs be labeled with adequate directions for safe use.3 A new breakthrough in the field of pharmacovigilance happened after a single episode in 1937, when sulfanilamide was used for the treatment of streptococcal infections as syrup. It contained diethylene glycol as solvent. This syrup was responsible for the death of 105 patients, and out of them, 34 were children and 71 were adults. This tragedy caused the American Congress to approve the Food, Drug, and Cosmetic Act in 1938, under which pharmaceutical product manufacturers were directed to show scientific evidences of the safety of the drugs before marketing.4 The thalidomide disaster is a milestone in the origin and further development of pharmacovigilance. Thalidomide was introduced in 1957 and was widely prescribed as a treatment for morning sickness, but there were reports of a congenital abnormality in fetus called as phocomelia. Thus, the words thalidomide and birth defects became permanently linked as a result of consumption of thalidomide as a sedative in pregnancy. In 1962, after multiple reports of phocomelia, it was discontinued.5 Thus, in 1962, the Kefauver Harris amendment was approved, which required scientific evidences of efficacy and safety of drugs before marketing in humans.6 Due to pooling of existing data on adverse drug reactions (ADRs), the WHO started a program for International Drug Monitoring in 1968. Initially, a pilot project was launched in 10 countries, which was established with national reporting systems for ADRs. As this network has expanded significantly, more countries worldwide have established national pharmacovigilance centers for the monitoring of ADRs. Currently, 134 countries are participating in the pharmacovigilance program,2 which is centrally coordinated by the WHO with its collaborating center in Uppsala, Sweden. The collaborating center maintains the global ADR database in software called as Vigibase. At present, the database contains more than four million ADR reports.7 The European Medicines Agency (EMA) was founded in 1995, and it is a decentralized body of the European Union (EU). Its main responsibility is protection and promotion of public and animal health through the evaluation and supervision of medicines for human and veterinary use. The EMA can be considered the hub of a European medicines network, comprising over 40 national competent authorities, the European Commission, the European Parliament, and a number of other decentralized EU agencies.8 The agency works closely with its European partners to build the best possible regulatory system for medicines for Europe and to protect the health of its citizens. Flow Chart 1 explains the flow of ADRs at regional, national, and international level.

History of Pharmacovigilance in India

The origin of pharmacovigilance in India goes back to 1986, when a formal ADR monitoring system consisting of 12 regional centers, each covering a population of 50 million, was proposed.10 However, nothing much happened until a decade later when in 1998, India joined the WHO ADR monitoring program based in Uppsala, Sweden. This attempt was unsuccessful and hence, from January 1, 2005, the WHO-sponsored and World Bank-funded National Pharmacovigilance Programme of India (PvPI) was made operational.11 The National Pharmacovigilance Program established in January 2005 was monitored by the National Pharmacovigilance Advisory Committee based in the Central Drugs Standard Control Organization (CDSCO), New Delhi. Two zonal centers – the South-West zonal center (located in the Department of Clinical Pharmacology, Seth GS Medical College and KEM Hospital, Mumbai) and the North-East zonal center (located in the Department of Pharmacology, All India Institute of Medical Sciences, New Delhi) – were to collate information from all over the country and send it to the Committee as well as to the Uppsala monitoring center in Sweden. Three regional centers would report to the Mumbai center and two to the New Delhi one. Each regional center in turn would have several peripheral centers reporting to it. At present, there are 26 peripheral centers. The program has three broad objectives: The short-term objective is to foster a reporting culture, the intermediate objective is to involve a large number of HCPs in the system in information dissemination, and the long-term objective is for the program to be a benchmark for global drug monitoring. The concept of pharmacovigilance is not new to India, as the pharmacovigilance program has been operational since 1998, when India decided to join the Uppsala center for adverse event monitoring. The CDSCO, Directorate General of Health Services, under the aegis of the Ministry of Health and Family Welfare, Government of India, in collaboration with Indian Pharmacopoeia Commission, Ghaziabad, which is a National Coordinating Centre (NCC), has initiated a nation-wide pharmacovigilance program for protecting the health of the patients by monitoring ADRs and hence assuring the drug safety. 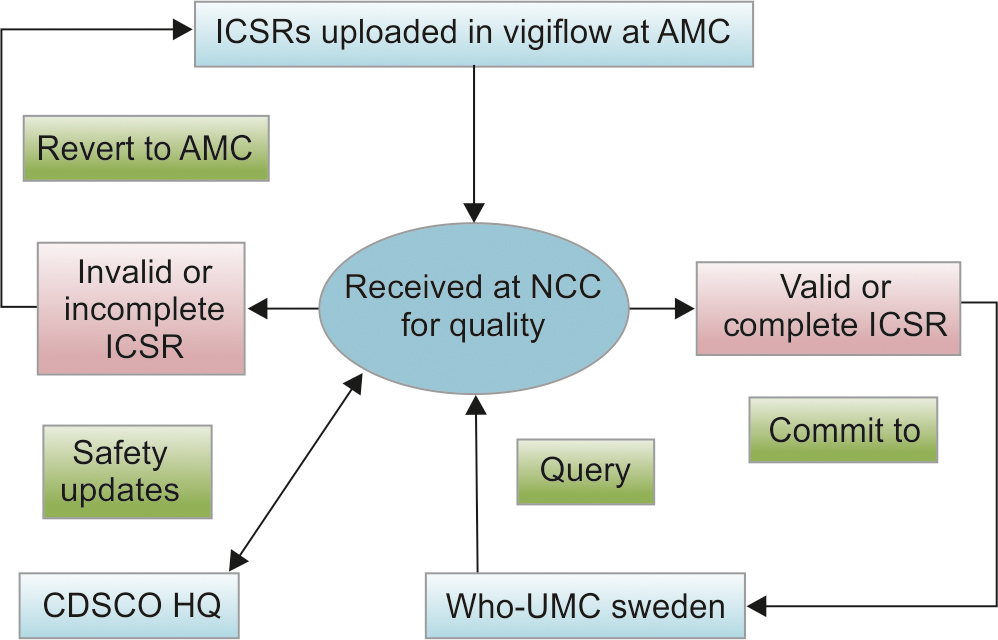 Adverse drug reaction monitoring centers (AMCs) under PvPI11,12 play a vital role in the collection and follow-up of ADR reports from the patients. They are set up across India to collect the adverse event information from patients. These AMCs are the Medical Council of India (MCI)-approved medical colleges and hospitals, medical/central/autonomous institutes, public health programs, or corporate hospitals. They are responsible for collecting the adverse event information from the patients, performing follow-up with them to check the completeness of the ADR reports as per Standard Operating Procedures, entering information in the prescribed software (Vigiflow), and sending them to NCC via the same software. Some AMCs are also responsible for providing training and technical support at the regional level. The PvPI started with the enrolment of >22 AMCs across the country in 2010, which has increased to 90 by the end of 2012, 60 of which are phase I AMCs and 30 are phase II AMCs. All the 90 AMCs are categorized into four zones, i.e., North, South, East, and West, as per zonal offices of CDSCO in India and are functioning under the NCC. There are more than 2,000 pharmacy colleges, 90 Institute of PharmD, more than 200 dental institutes, and more than 320 nursing institutes all over India. All PharmD, pharmacy practice, dental, and paramedical colleges are associated with patient care by providing safe and effective medication. For robust pharmacovigilance, these colleges will be included as AMCs under this program in the years to come. There are more than 360 MCI-approved medical colleges in India, of which 194 colleges are private. All MCI-approved colleges and Pharmacy Council of India-approved pharmacy colleges having pharmacy practice and PharmD will be included in PvPI through proper channel. All MCI-approved medical colleges and hospitals in the program covering north, south, east, and west of India will be enrolled, and ultimately, all government and corporate hospitals will be enrolled in the program covering entire India (Flow Chart 2).

It is due to pharmacovigilance program14,15 in India that the regulatory agencies, media, and consumers have become more aware about the benefits and risks associated with the use of medicines. The various aims of PvPI are:

WHY WE NEED PHARMACOVIGILANCE/ADR MONITORING?

Pharmacovigilance plays an important role in management and ensuring safety of treatment in patients. The various ways that help in this regard are as follows:

IMPACT OF PHARMACOVIGILANCE IN PATIENT TREATMENT

Knowledge of pharmacovigilance has improved the knowledge of the treating physician about various drug-related events. The various benefits are as follows.

Patients with chronic kidney disease (CKD) and end-stage renal disease have significant challenges and complex therapeutic regimens. The presence of multiple comorbidities, such as cardiovascular disease, hypertension, and diabetes, requires the use of a variety of pharmaceutical interventions in addition to those needed to manage renal insufficiency.27 Adding to this complex situation is the impact of chronic renal replacement therapy, which has its own set of adverse effects, but where drug effects may play either a causative role or may interact with an evolving complication. The impact of a drug safety issue in a patient with end-stage renal failure may operate through different mechanisms and could include:

Since information related to the use of drugs in the CKD/dialysis population is at best limited, it is important that nephrologists and other health care workers managing patients with end-stage renal failure should understand the concept and implementation of pharmacovigilance. This will contribute to enhanced patient safety for this high-risk population and mirror the drive by nephrology organizations to develop patient safety indicators to improve CKD-specific treatment.31

Impact on Other Clinical Situations

Thus, it can be concluded that pharmacovigilance is an important tool in ensuring patient safety as by reporting the ADRs, the patient morbidity and mortality can be reduced. This also enhances the knowledge of prescribers about drug-related events, and thus appropriate modification in the treatment can be done to benefit the patients.