Appendiceal mucocele is an uncommon pathology of the appendix (0.15–0.6% of all appendectomies) characterized by obstructive dilatation of the appendicular lumen by mucinous secretions.1 Mucinous cystadenoma and Mucinous cystadenocarcinoma accounts for about 60 to 70% of all mucoceles. Other causes are retention cyst, mucosal hyperplasia, carcinoid, appendicolith, endometriosis, adhesions and volvulus. The patient is often (23–50%) asymptomatic or presents with nonspecific symptoms, such as weight loss, abdominal pain/mass, altered bowel habits, acute appendicitis, or rectal bleeding. Though preoperative diagnosis is essential, but sometimes, despite preoperative investigations, the diagnosis may still remain elusive and may only be made at the time of surgery. The management of mucocele is necessary because of the risk of rupture and associated pseudomyxoma peritonei, which consists of most dangerous complication. Surgical treatment is mandatory and surgical options ranges from simple appendectomy to right hemicolectomy.

As none of the investigations gave a conclusive diagnosis, diagnostic laparoscopy was planned. On laparoscopy, there was a dilated appendix in the subcecal location (Fig. 2). There was no lymphadenopathy in the ileocecal region. The peritoneal surfaces did not show any metastatic deposits, and cecum was grossly normal. So we decided to proceed with laparoscopic appendectomy. Every attempt was made to handle the appendix with atraumatic graspers, tugging mainly on the mesoappendix. After clipping the appendicular artery, knotting was used to negotiate the appendicular base. Appendectomy was completed and the specimen was removed in an endobag through the umbilical port. The resected specimen revealed presence of mucous in the lumen and the diagnosis of mucinous cystadenoma of appendix was confirmed by histopathology. The postoperative period was uneventful and the patient was discharged on 3rd postoperative day. 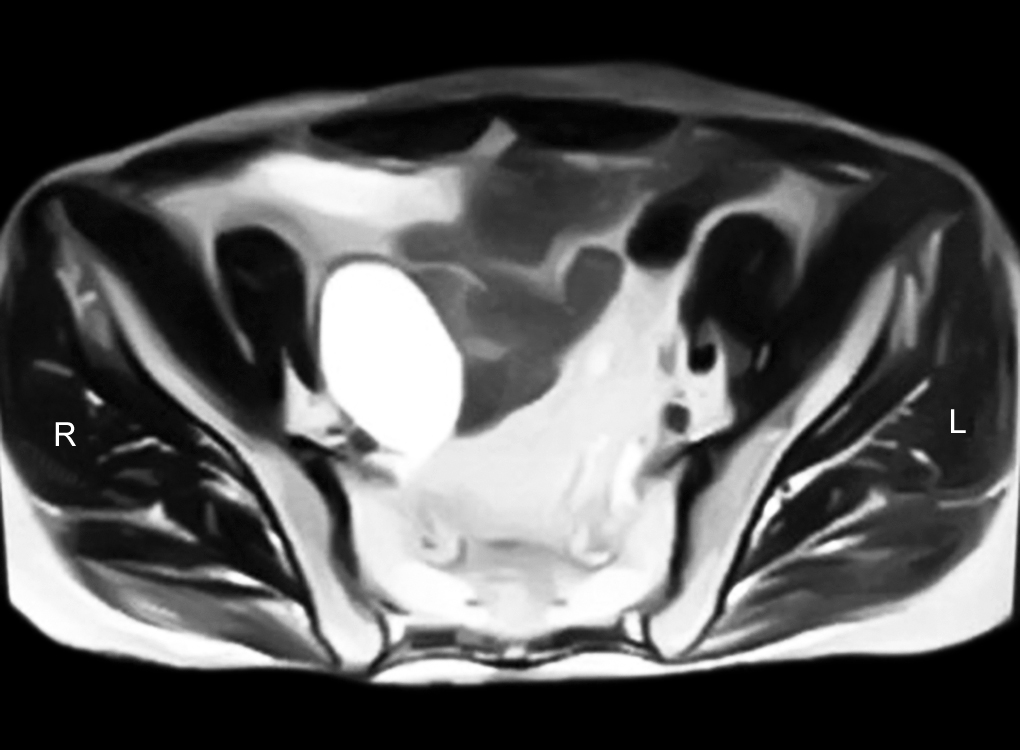 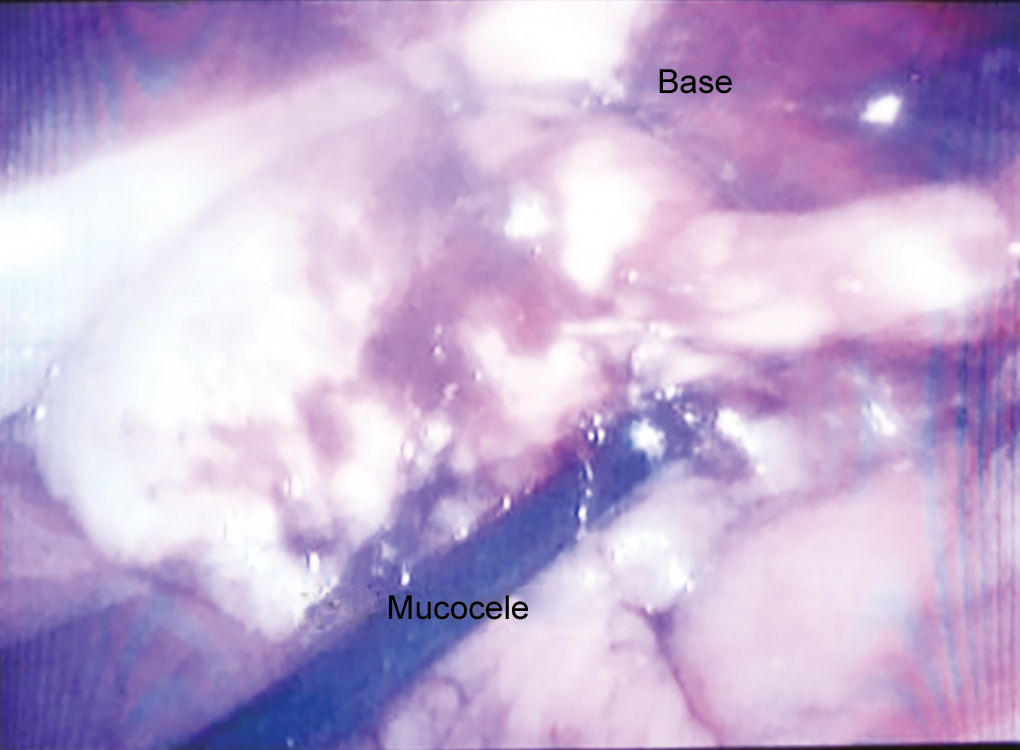 Mucocele of the appendix was first described by Rokitansky.2 It is more common in females, with male to female ratio of 4:1. The average age of presentation for benign mucocelesis was 54 years and for malignant disease, age is 64 years.3 The most common presentation of symptomatic appendiceal mucocele patients is acute or chronic right lower quadrant abdominal pain, as occurred with our patient.4 A correct preoperative diagnosis of appendiceal mucocele is difficult due to the nonspecific symptoms. Radiological investigations including USG, CT, and colonoscopy have all been used to describe these tumors but none of these is entirely conclusive.5 In our case too, neither ultrasound nor CT scan could provide a preoperative diagnosis. Laparoscopic surgery, being both diagnostic and therapeutic, provides the advantages of good exposure and evaluation of entire abdominal cavity, as well as more rapid recovery with avoidance of a large incision and a better cosmetic outcome. However, careful handling of the specimen is recommended as spillage of the contents can lead to pseudomyxomaperitonei.6 Conversion to laparotomy should be considered if the lesion is traumatically grasped or if the tumor clearly extends beyond the appendix or if there is evidence of malignancy, such as peritoneal deposits.6 Dhage-Ivatury and Sugarbaker7 have developed an algorithm for the selection of the type of surgery. It envisages several factors: (1) Whether or not a mucocele is perforated; (2) whether the base of the appendix (margins of resection) is involved in the process; and (3) whether there are positive lymph nodes of mesoappendix and ileocolic. As a result, patients may require different treatment options: Appendectomy to right hemicolectomy, cytoreductive surgery, heated intraoperative intraperitoneal chemotherapy, early postoperative intraperitoneal chemotherapy.7 In our patient, the mucocele was not perforated (no discharge into the peritoneum cavity), there was no pathologic process in the base of the appendix (negative margins of resection), and the regional lymph nodes were negative. Therefore, only appendectomy was performed, which is an adequate surgery in such a case.

In conclusion, appendiceal mucocele provides a diagnostic challenge both because of its rarity and varied presentation. In the era of minimally invasive procedures, the laparoscopic approach allows diagnostic evaluation and appendectomy to be performed and confers advantages of short hospital stay and decreased recovery period, particularly in patients with comorbid conditions.