During exposure of the posterior mediastinum a prominent AHZ vein was seen lying on the left side parallel to aorta. On further dissection, this channel was about 17 cm in length. It drained the 1st to 10th left posterior intercostal veins and drained itself vertically into the left brachiocephalic vein (LBV) (Fig. 1). The azygos vein, superior vena cava, and inferior vena cava were normal. There was no communication between this channel and azygos vein. The HAV was less developed and drained immediately into the azygos vein after its formation. The cardiovascular system and the respiratory system showed no gross anomaly. 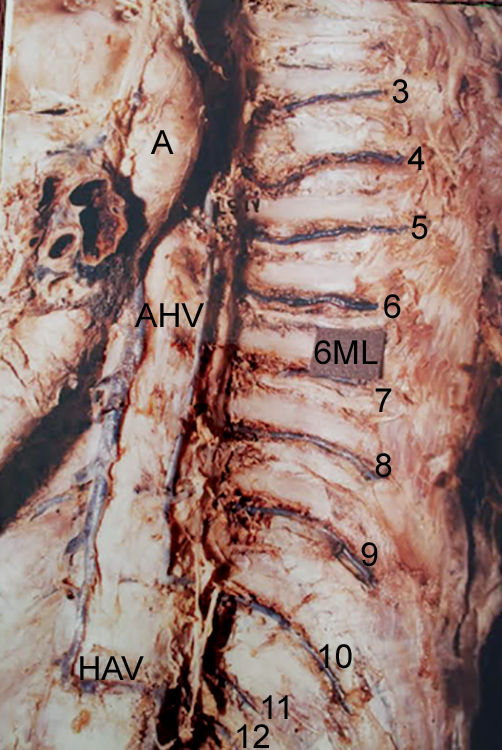 The complex embryological development causes many possible variations in the form of agenesis of one part and development of the other part, leading to redistribution of area of drainage of azygos, hemiazygos, and AHV.9 The present variation was also recorded by Muhm et al10 and Mahato,11 where the AHV instead of draining into the azygos vein drained into the LBV after joining the left superior intercostal vein. A complete reverse case was noted by Ozbek et al.5 The present variation can be explained on the basis of variation in the development of left azygos vein on the left side. The left superior intercostal vein ends in this long channel, and this channel drained into LBV. Embryologically, this could be explained by the persistence of the cranial part of the azygos line on the left and the oblique communication represented by the LBV. The present long channel represented the AHV with an added cranial extension into the remaining and persistent cephalic part of the left posterior cardinal vein.9 In the absence of the HAV, the left superior intercostal vein formed the terminal conduit for the entire upper left posterior thorax for its venous drainage.12 It is important to interpret these variations while making diagnosis and to avoid complications during mediastinal procedures.13 Also, the confusion can be avoided in diagnosing these structures after detection in magnetic resonance imaging scans.14

The present variation is clinically important because of the position of long channel close to the left of the aortic arch. It can present radiologically as a small mass or nipple adjacent to the lateral or superior aspect of the arch seen best on supine anteroposterior mediastinal tomograms. This physiologically normal venous shadow should not be confused with lymphadenopathy or small tumor.