Aim: The purpose of this research was to compare the microleakage of different root-end filling materials.

Materials and methods: Thirty human single-rooted teeth were decoronated at the cementoenamel junction, shaped with protaper rotary files, and obturated. About 3 mm apical resection of the roots was carried out and 3-mm deep root-end cavities were prepared using an ultrasonic retro-tip. The root-end cavities were then retrofilled with mineral trioxide aggregate (MTA Angelus) and biodentine, respectively, and submerged in 2% methylene blue dye for 24 hours. The depth of dye penetration and microleakage in each sample were recorded using a stereomicroscope.

Results: Higher mean microleakage (mm) was recorded in MTA (2.40 ± 0.63) when compared to biodentine (1.60 ± 0.63) and the difference between them was statistically significant.

Conclusion: Both the tested materials showed microbial leakage. Root-end fillings with biodentine had the lowest micro-leakage and better marginal adaptation as compared to MTA.

Clinical significance: Biodentine showed better marginal adaptation and sealing ability when compared to MTA and can be considered as an alternative to MTA as a root-end filling material.

Endodontic surgery is defined as a surgical procedure that involves eliminating pathological periapical tissue, excision of the root surface, and closing the root canal against the entry of pathogens, thus reaching the objective of creating optimal conditions for health, tissue regeneration, and formation of a new support structure for a tooth.3

The primary objective of root-end fillings is to seal the apical region to avoid bacterial infiltration or their products from the periradicular tissues to the root canal system.

The ideal properties of the root-end filling material include biocompatibility, radiopacity, dimensional stability, antibacterial properties, adequate compressive strength and hardness, easy handling, osteoinductive and osteoconductive properties, and adherence to the canal walls to provide a good apical seal.4 Insufficient retrograde seal is considered as the major cause of treatment failure in endodontic surgeries. Thus, good sealing ability is an important requisite of the root-end filling materials.5

Over the years, many restorative and endodontic materials have been suggested for root-end filling, including amalgam, zinc oxide eugenol (ZOE) cement, polycarboxylate cement, gutta-percha, calcium hydroxide, glass ionomer cement (GIC), and composite resins. However, various disadvantages, such as marginal leakage, moisture sensitivity, and safety issues, associated with these materials have discouraged their use as retrograde filling materials in the modern endodontic practice.6

Keeping in view all the requirements, mineral trioxide aggregate (MTA) was developed by Torabinejad in the early 1990s. MTA is used for creating an apical plug during apexification of immature teeth, for perforation repair, in the treatment of internal root resorption, as a retrograde filling material, and pulp-capping material.7 A variant of MTA named MTA Angelus (Angelus, Londrina, Brazil) was launched in 2001 and was approved by food and drug administration (FDA), USA in 2011. It possesses the same desirable properties as traditional MTA with the difference of reduced setting time, and is sold in containers that permit more controlled dispensing of the material.

In the recent years, various materials like biodentine, bioaggregate and calcium-enriched cement (CEM) and bioceramic materials like endosequence root repair material (ERRM) have been introduced with the aim of overcoming some of the disadvantages of MTA, such as difficulties in handling and long setting time.

Biodentine (Septodont, Saint-Maur-des-Fosses, France) is a relatively new material introduced as a dentine substitute. The manufacturer claims that this material can be used for pulp capping, pulpotomy, apexification, in root perforation, and as a root-end filling material in periapical surgery. In various studies, biodentine has shown biocompatibility and ability to induce odontoblast differentiation and mineralization in cultured pulp cells. The main benefits of biodentine over other calcium silicate-based materials are the reduced setting time, better handling, and mechanical properties.4

The sealing ability of root-end filling materials has been assessed using different methodologies, such as dye penetration, scanning electron microscopy, bacterial penetration, electrochemicals, use of radio isotopes, and fluid filtration techniques. However, the linear measurement of dye penetration is the most popular method used to assess endodontic microleakage.8

The purpose of this study is to evaluate marginal adaptation and microleakage, by dye penetration, of the root-end filling materials—biodentine and MTA.

The present in vitro study was conducted to evaluate the microleakage of two root-end filling materials—MTA and biodentine. 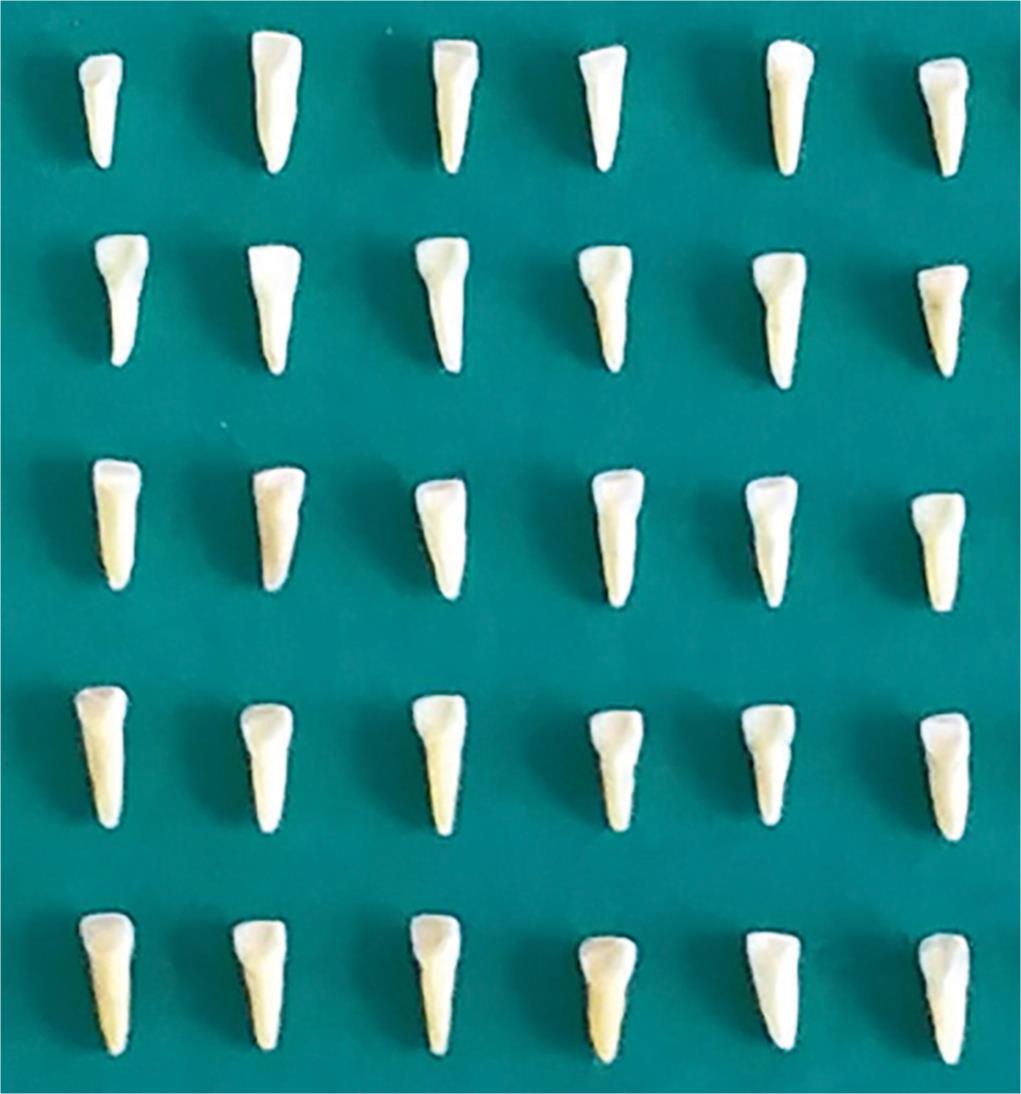 Preoperative radiographs were taken (Fig. 2A) and access cavities were prepared. The working length was established (Fig. 2B) and the root canals were prepared using a standard technique with rotary protaper files. The preparation was started with the SX file followed by S1, S2, F1, F2, and F3 files. Copious irrigation with sodium hypochlorite and normal saline was carried out throughout the procedure. Final irrigation will be done with 17% ethylene diamine tetra-acetic acid (EDTA) followed by sodium hypochlorite for 1 min, respectively, followed by rinsing with saline.

Root canals were dried using paper points and obturation was done with gutta-percha. Radiographs were taken to confirm the quality of obturation and access cavities were sealed with composite restoration after 24 hours (Fig. 2C).

The apical 3 mm of roots were sectioned perpendicular to the long axis of tooth with a diamond disk under constant water spray and 3 mm deep retrograde cavities were prepared in each root using an ultrasonic retro-tip (AS3D, Satelac, France) (Fig. 3).

After root-end preparation, teeth were randomly divided into two groups of 15 samples each

All root-end filling materials were placed incrementally following which radiographs were taken to confirm proper filling of the material (Figs 4B and 5B). 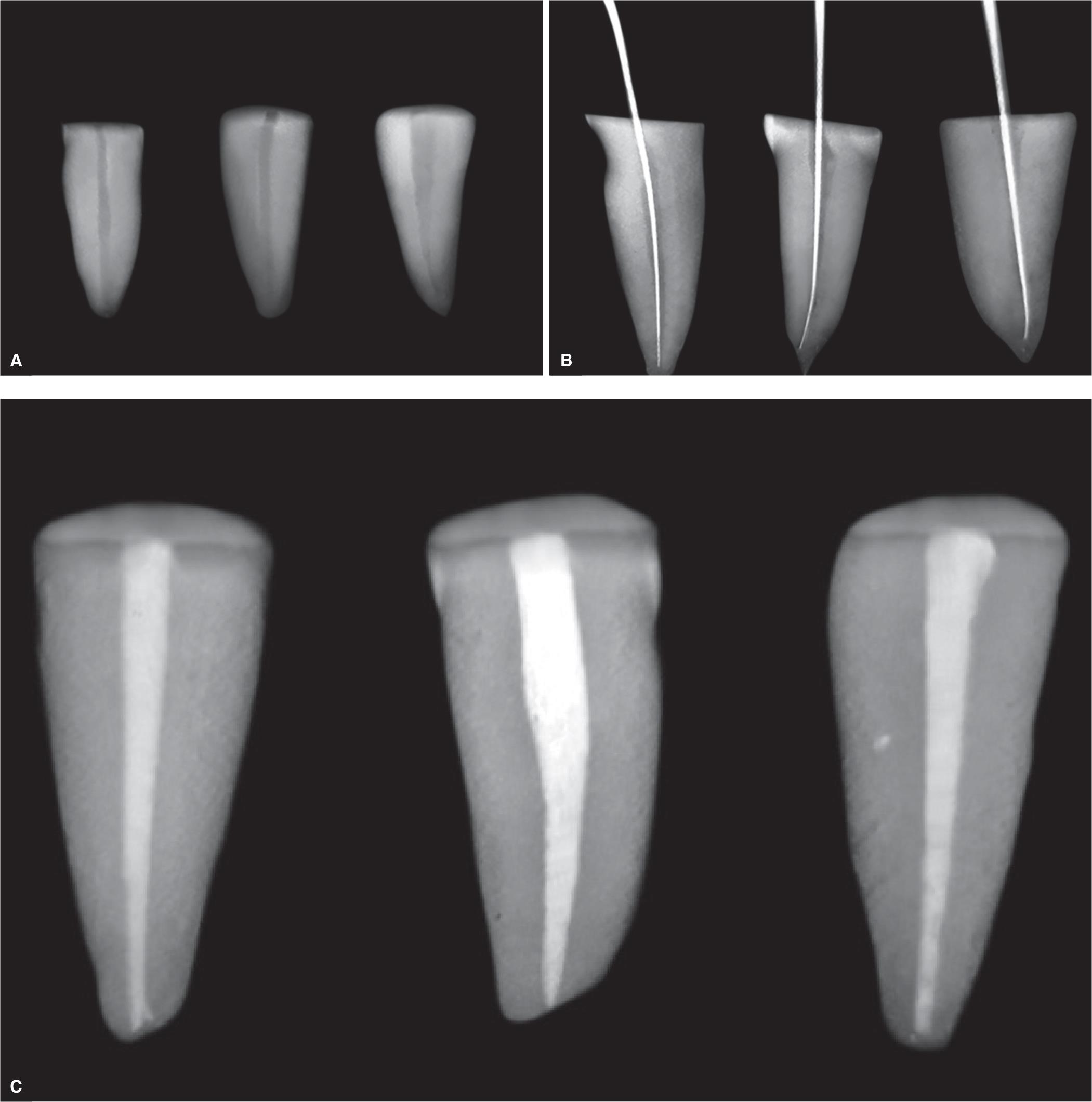 After root-end filling, a moist cotton pellet was placed on the MTA-filled root end. All the samples were stored at 37 °C for 1 week to ensure complete setting of root-end filling materials.

Specimens were coated with two layers of nail varnish except at apical 3 mm and were allowed to dry following which they were suspended in 2% methylene blue dye for 24 hours and subsequently rinsed in tap water for 15 minutes.

All the specimens were then split in longitudinal sections using a diamond disk under constant water spray. The depth of dye penetration was examined using a stereomicroscope and microleakage associated with root-end filling materials was evaluated.

Scores were given according to the dye penetration as follows:

Figs 4A and B: (A) MTA Angelus; (B) Radiograph showing retro-cavities filled with MTA Angelus

Statistical analysis was done using Statistical Package for Social Sciences (SPSS) Version 20.1 (IBM Corporation, Chicago, Illinois, USA). The Kruskal–Wallis test was used to check differences in mean scores between the groups. The difference in leakage score proportions was evaluated by the Chi-square test. p value <0.05 was considered to be statistically significant (Table 1). 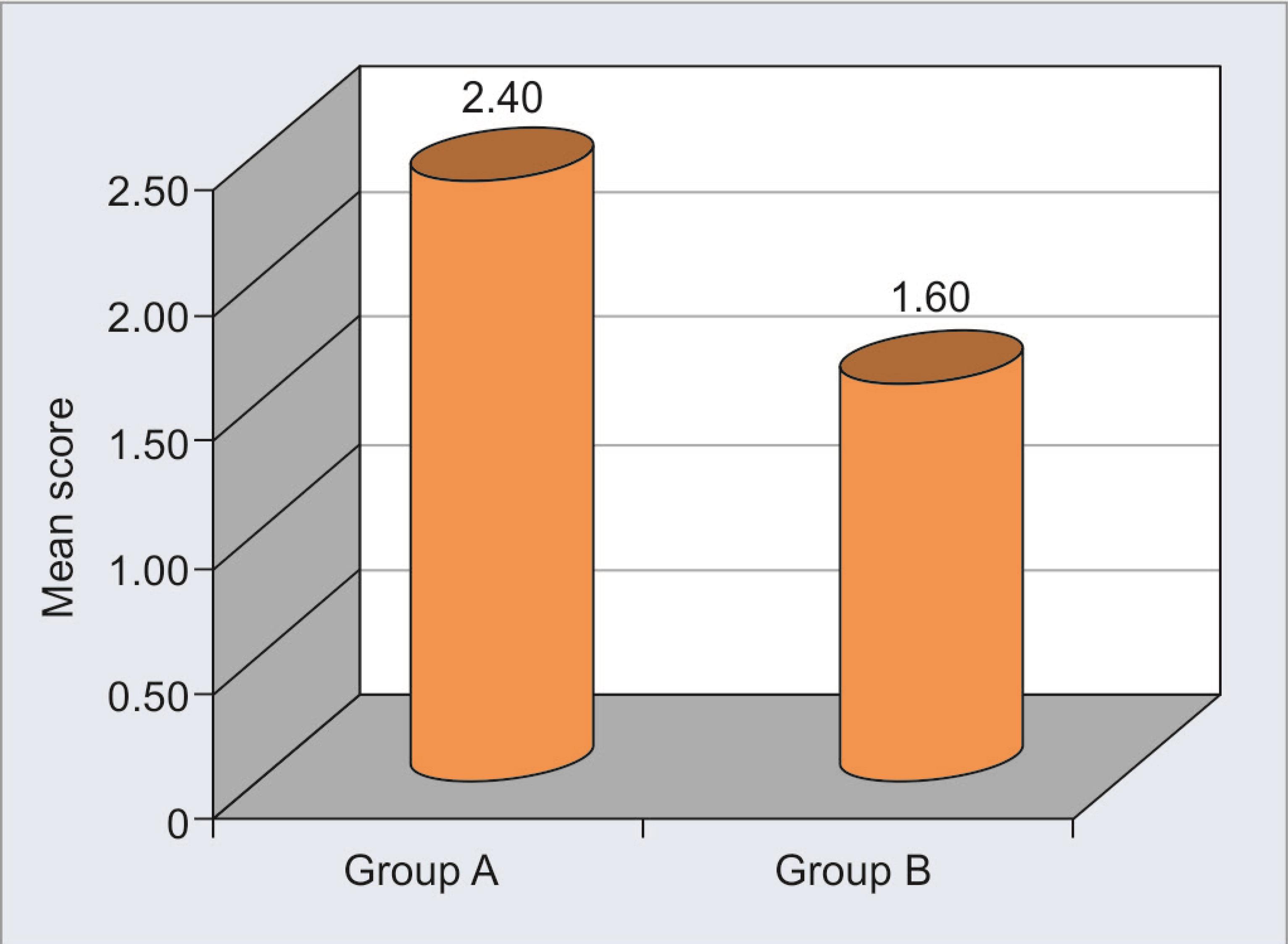 Graph 1: Comparison of the mean scores of microleakage in MTA Angelus and biodentine

The sealing ability of two different materials, MTA and biodentine, as root-end filling materials, and GIC as the control group, was compared. The analysis done by the Mann–Whitney test showed statistically significant differences. Higher mean microleakage (mm) was recorded in MTA (2.40 ± 0.63) when compared to that in biodentine (1.60 ± 0.63) and the difference between them was statistically significant (Graph 1).

The major aim of endodontic treatment is the complete debridement of microscopic organisms from the root canal and subsequent establishment of an apical barrier to prevent further ingress of microorganisms and their by-products to the periapical tissues and vice versa.9

The nonsurgical treatment approach is mainly employed to resolve most of the tribulations in endodontics. However, surgical invention may be necessary in certain conditions, such as large periapical lesions, broken endodontic instruments in apical third of root canal, apical variations, improper obturation, calcified canals, and dilacerated roots.9

Surgical endodontic therapy involves complete elimination of pathological periradicular tissue, apical resection of the root followed by root-end cavity preparation, and insertion of a retrograde filling material into the prepared cavity in order to provide a hermetic seal against the leakage of irritants from the canal into the periapical tissues. Root-end resection has been reported to eliminate anatomical variations, ledges, resorptive defects, canal obstructions, perforation defects, and separated instruments present in the apical area of the root.3 Kim et al.10 reported that the apical resection of 3 mm of the root will eliminate 93% of the lateral canals and 98% of the apical ramifications, which may contain material that would contribute to the periradicular disease. Therefore, resection of the root was performed at the level of 3 mm from the apex to eliminate any lateral canals and apical ramifications.

The apical resection of the root should be done perpendicular to the long axis of the root devoid of bevels. Inclined plane resection results in open dentinal tubules that may compromise healing of the lesion. Beveling also causes significant damage to the tissue structures, such as buccal bone and root which are intended to be saved.11 So, the root should be resected perpendicular to the long axis of the root as possible which has been done in this study with the aid of a diamond disk.

The ideal depth of root-end filing material has been reported to be 3 mm as more depth does not bestow any greater benefits, whereas lesser depth may jeopardize the long-term success of apical seal. Hence, the depth of cavities in this study was depth to an optimum of 3 mm.12

Traditionally, root-end preparation has been carried out with burs that have disadvantages, such as limited access, risk of perforation of the root, and root beveling leading to an increased number of exposed dentinal tubules that favors apex reinfection. The use of ultrasonic instruments for the root-end cavity preparation improves access to the surgical field, avoiding beveling and producing a cleaner, conservative, smooth, deep, and more centrally placed cavity in the root canal which decreases the number of exposed dentinal tubules at the resected root surface, thereby minimizing apical leakage.13

Aqrabawi14 stated that if root-end filling materials were able to prevent the leakage of small particles, such as dye, they would possibly prevent the penetration of bacteria and their by-products. So, this study was designed to apply methylene blue dye to evaluate the sealing ability of root-end filling materials by measuring the penetration of dye into dentinal tubules which measures the extent of microleakage using a stereomicroscope. As methylene blue is a water-soluble fluorescent dye, it is easily detectable, even in a low concentration, it can move freely along the interface, of low toxicity, stable in an aqueous environment, stable in varying pH, and nondestructive to the substrate or material in contact.15 Hence, it was chosen for this study.

The results of the present study revealed that samples filled with biodentine showed the least leakage value when compared with other experimental groups.

Raskin et al.16 reported that when biodentine comes into contact with dentine, tag-like structures known as mineral infiltration zone form alongside an interfacial layer where the degradation of the collagenous component of interfacial dentine occurs by the alkaline caustic effect of calcium silicate cement hydration products which contributes to the sealing ability of biodentine. Han and Okiji17 showed that the formation of tag-like structures in biodentine was higher than MTA due to increased calcium and silicon ion uptake into dentin by biodentine, however, modified powder composition, i.e., the addition of setting accelerators and softeners, a new pre-dosed capsule formulation for use in a mixing device, largely improves the physical properties including the sealing ability of the material. Porosity and pore volume in set biodentine material are also less than those of MTA that may have been attributed to the better sealing of biodentine.18

Both the tested materials showed microbial leakage. Root-end fillings with biodentine had the lowest micro-leakage and better marginal adaptation as compared to that of MTA.

Biodentine showed better marginal adaptation and sealing ability when compared to MTA and can be considered as an alternative to MTA as a root-end filling material.