Guidelines for the Management of Snakebites

Source of support: Self

India is estimated to have the highest snakebite mortality in the world. World Health Organization (WHO) places the number of bites to be 83,000 per annum with 11,000 deaths.1 Most of the fatalities are due to the victim not reaching the hospital in time where definite treatment can be administered. In addition, community is also not well informed about the occupational risks and simple measures which can prevent the bite. It continues to adopt harmful first-aid practices, such as tourniquets, cutting, and suction. Studies reveal that primary care doctors do not treat snakebite patients mainly due to lack of confidence.2 At the secondary and the tertiary care level, multiple protocols are being followed for polyvalent anti-snake venom (ASV) administration, predominantly based on western textbooks.

There are about 236 species of snakes in India, most of which are nonpoisonous. Their bites, apart from causing panic reaction and local injury, do not harm the patients. However, there are 13 known species that are poisonous, of these, four, namely common cobra (Naja naja), Russell’s viper (Daboia russelii), saw-scaled viper (Echis carinatus), and common krait (Bungarus caeruleus), are highly venomous and believed to be responsible for most of the poisonous bites in India.3 However, this assumption of great four has led to non-identification of other poisonous species which are going unnoticed and leading to deaths. The recent discovery of the hump-nosed viper, capable of causing life-threatening symptoms, has demonstrated this. This nonrecognition has led the ASV manufacturers to produce antivenom only against these four species.4 Thus, there is a need to abandon the old concept of “The Big Four” in order to determine all the medically significant species in India.

General: Fear and anxiety are very common and can lead to panic and trauma related to falls due to severe anxiety. 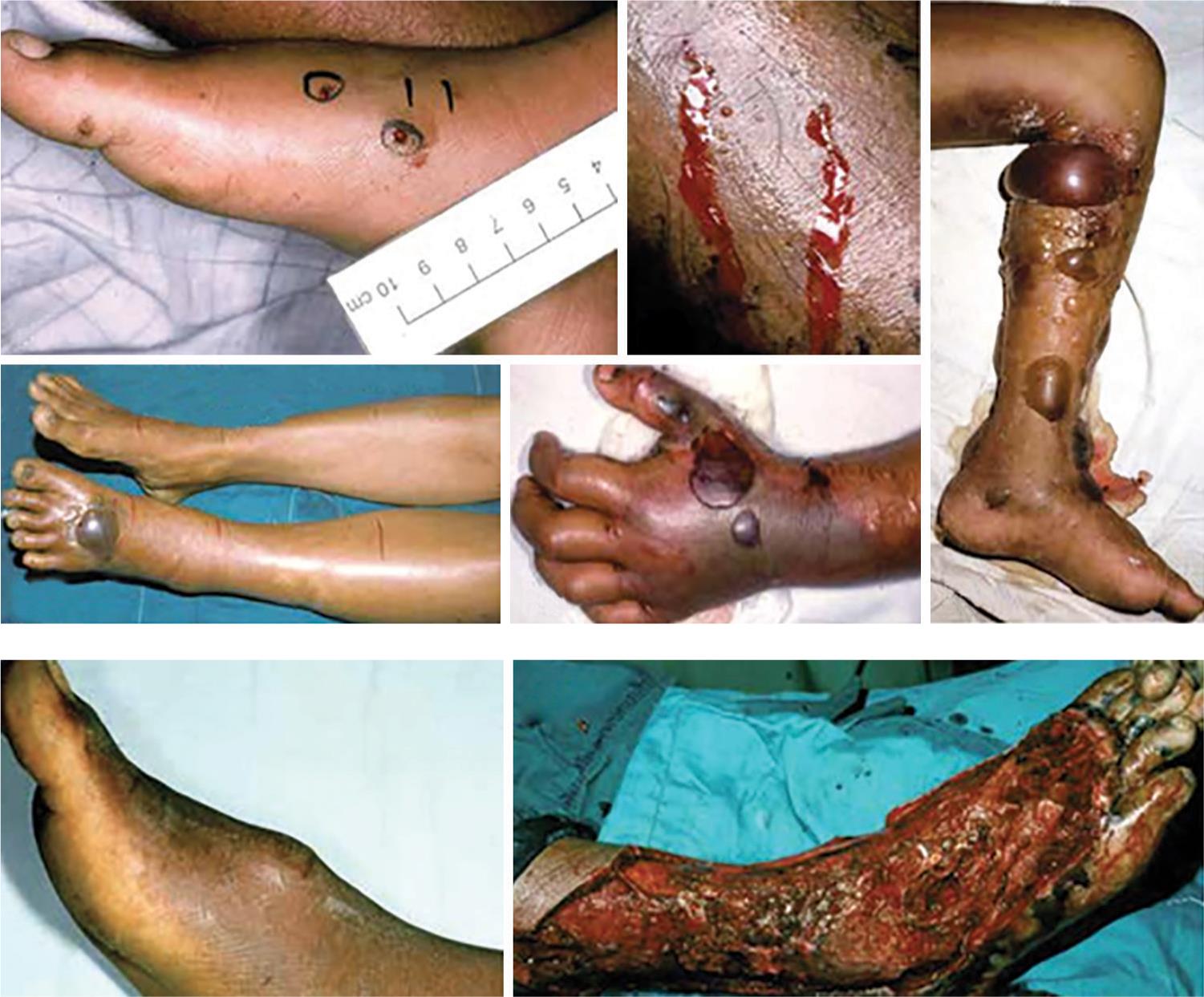 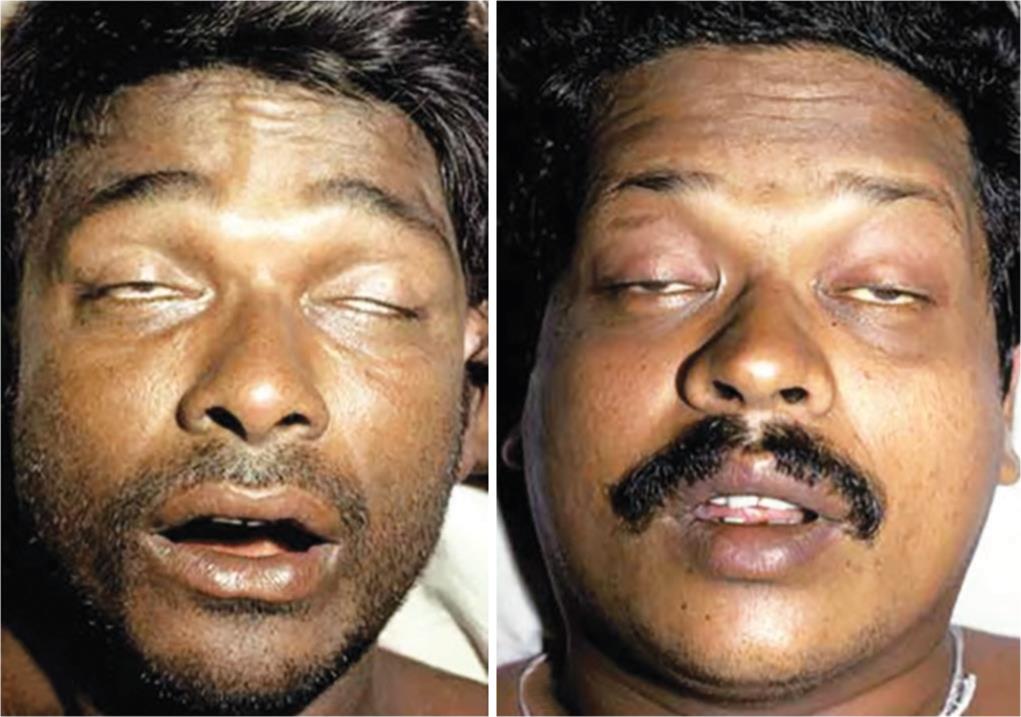 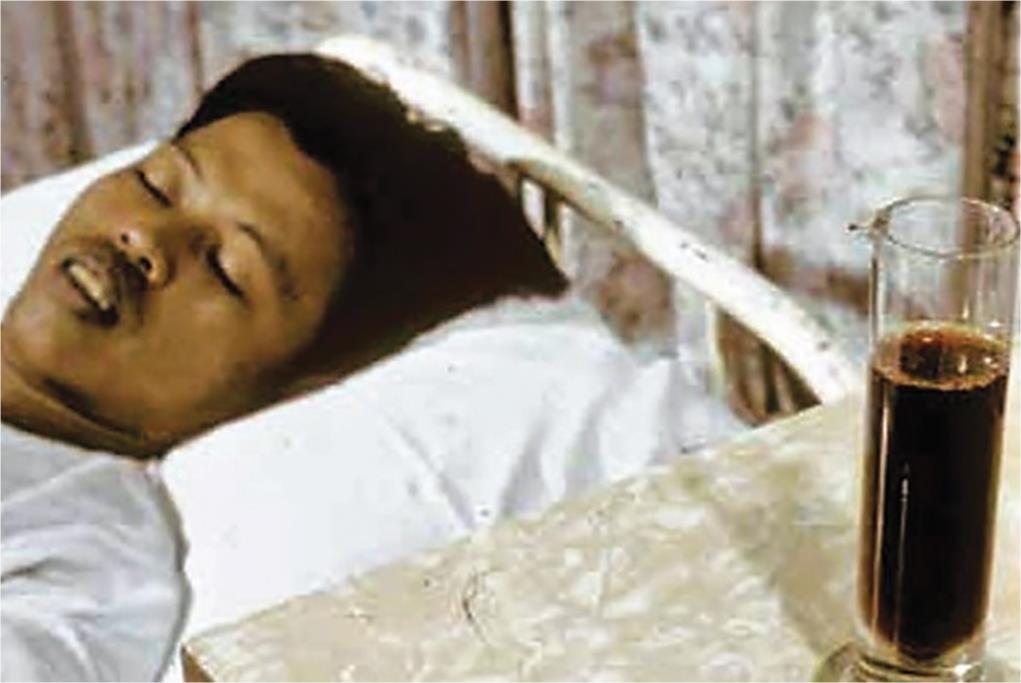 If the “spat” venom enters the eyes, there is immediate and persistent intense burning, stinging pain, followed by profuse watering of the eyes with the production of whitish discharge, congested conjunctivae, spasm and swelling of the eyelids, photophobia, clouding of vision or temporary blindness, corneal ulceration, permanent corneal scarring, and secondary endophthalmitis (Fig. 5).

20-minute whole blood clotting test (20WBCT) is a simple, informative bedside test requiring only a new, clean, dry, ordinary glass tube, bottle, vial, or syringe. The positive (nonclotting) result indicates severe consumption coagulopathy and the need for immediate antivenom treatment. False positive (nonclotting) 20WBCT results from the use of plastic, polystyrene, or polypropylene rather than ordinary glass, or glass cleaned with detergent, soap, or washing fluid that destroy surface activation of blood coagulation. The test should be carried out every 30 minutes from admission for 3 hours and then hourly after that. If incoagulable blood is discovered, the 6 hourly cycle is then adopted to test for the requirement for repeat doses of ASV (Fig. 6).

Also, the single breath counting test is done in suspected bites with signs of neurological involvement and the same is repeated at 15 minute interval over the first 2 hours.

MANAGEMENT PROTOCOL (AS PER RECENT WHO GUIDELINES 2016)

The first aid being currently recommended is based on the mnemonic.

It consists of the following:

CARRY = Do not allow victim to walk even for a short distance; just carry him in any form, especially when bite is at leg.

I = Immobilize in the same way as a fractured limb. Use bandages or cloth to hold the splints, not to block the blood supply or apply pressure. Do not apply any compression in the form of tight ligatures, they do not work and can be dangerous!

GH = Get to hospital immediately. Traditional remedies have NO PROVEN benefit in treating snakebite.

T = Tell the doctor of any systemic symptoms that manifest on the way to hospital.

Traditional methods should be discarded.

Snakebite can often cause severe pain at the bite site. This can normally be treated with painkillers, such as paracetamol. Aspirin and nonsteroidal anti-inflammatory drugs (NSAIDs) should not be used, as they can exacerbate bleeding. This can be particularly dangerous in a patient already having coagulopathy. Mild opiates, such as tramadol 50 mg, can be used for good pain relief.

Care must be taken when removing tight tourniquets tied by the victim. Sudden removal can lead to a massive surge of venom leading to neurological paralysis and hypotension due to vasodilation. Before removal of the tourniquet, test for the presence of a pulse distal to the tourniquet. Be prepared to handle complications, such as sudden respiratory distress or hypotension. If the tourniquet has occluded the distal pulse, then a blood pressure cuff can be applied to reduce the pressure slowly.9

ASV is the mainstay of treatment. In India, polyvalent ASV, i.e., effective against all the four common species: Russell’s viper, common cobra, common krait, and saw-scaled viper, and no monovalent ASVs are available. There are known species, such as the hump-nosed viper (Hypnale hypnale), where polyvalent ASV is ineffective. ASV is produced both in liquid and lyophilized forms. There is no evidence to suggest which form is more effective. Liquid ASV requires a reliable cold chain and has a 2-year shelf life. Lyophilized ASV, in powder form, has a 5-year shelf life and requires only to be kept cool.

Antivenom treatment is recommended if and when a patient with proven or suspected snakebite develops one or more of the following signs:

The prophylactic regime is 0.25 to 0.3 mg adrenaline 1:1000 given subcutaneously (deep IM) if the victim has a known sensitivity to ASV. Premedication with adrenaline, hydrocortisone, and antihistamine may be advisable, in order to prevent severe reactions. In the case of reactions, antihistaminics can be administered to control the reaction and if severe, adrenaline should be administered.10 Once the patient has recovered, the ASV can be restarted slowly after 10 to 15 minutes, keeping close observation. Late serum sickness can be treated with oral prednisolone and/or antihistaminics.

Test dose has been shown to have no predictive value in detecting anaphylactoid or late serum reactions and should not be used. These reactions are not IgE mediated but complement activated. They may also pre-sensitize the patient and thereby create greater risk.

Symptoms and signs being not a useful guide for deciding the degree of envenomation and having no diagnostic methods to determine the level of venom in blood or tissue, any ASV regimen adopted could only be an estimate. One milliliter of ASV neutralizes 0.6 mg of Russell’s viper venom, 0.6 mg of cobra venom, 0.45 mg of krait venom, and 0.45 mg of saw-scaled viper venom.

Start IV normal saline with a wide bore needle. Begin with 10 vials of ASV in 100 mL of normal saline and to start with 10–15 drops per minute for 15 minutes and watch for reactions. If the patient is not having signs and symptoms of anaphylactic shock, continue the ASV. All ASVs are to be administered over a 1 hour period at constant speed. Continue to monitor the vital signs at 5 minute interval for the first 30 minutes and then at 15 minute interval for 2 hours. ASV can be repeated if the following criteria are present (Table 2).

Antivenom treatment alone cannot be relied upon to save the life of a patient with bulbar and respiratory paralysis. Death may result from aspiration, airway obstruction, or respiratory failure. A clear airway must be maintained. Once there is loss of gag reflex and pooling of secretions in the pharynx, failure of the cough reflex, or respiratory distress, a cuffed endotracheal, laryngeal mask airway, or supraglottic airway should be inserted. If this is impossible for any reason, or the need for prolonged ventilation is anticipated, a tracheostomy should be performed and cuffed tracheostomy tube should be inserted.

This test involves the administration of 1.5 to 2 mg of neostigmine IM together with 0.6 mg of atropine IV. The patient should be closely observed for 1 hour to decide whether neostigmine is effective. The following measures are useful objective methods to asses this:

If the victim responds to the neostigmine test, then continue with 0.5 mg of neostigmine IM half hourly plus 0.6 mg atropine IV for five doses and then 2 to 12 hourly according to recovery. If there is no improvement in symptoms after 1 hour, neostigmine should be stopped.

Patients who respond convincingly can be maintained on neostigmine methylsulfate, 0.5 to 2.5 mg every half hour up to 10 mg/24 hours maximum for adults or 0.01 to 0.04 mg/kg every 2 to 4 hours for children by intramuscular, intravenous, or subcutaneous injection together with atropine to block muscarinic side effects. Patients able to swallow tablets may be maintained on atropine 0.6 mg twice each day, neostigmine 15 mg four times each day, or pyridostigmine 60 mg four times each day.

The “ice pack test”13 as a “possible alternative to the Tensilon test” is recovery of ptosis in the one eye after applying an ice pad that inhibits intrinsic cholinesterase in a patient with postsynaptic blockade of neuromuscular transmission. In this, digital pressure is applied to the frontalis muscle to avoid its influencing upper eyelid retraction. An ice-filled plastic glove or frozen ice pack is then gently applied to one eyelid for 2 minutes, after which the palpebral fissures of both eyes are immediately remeasured. A more-than-2 mm difference in palpebral fissure between the cooled and control eyelids might be considered a positive result. 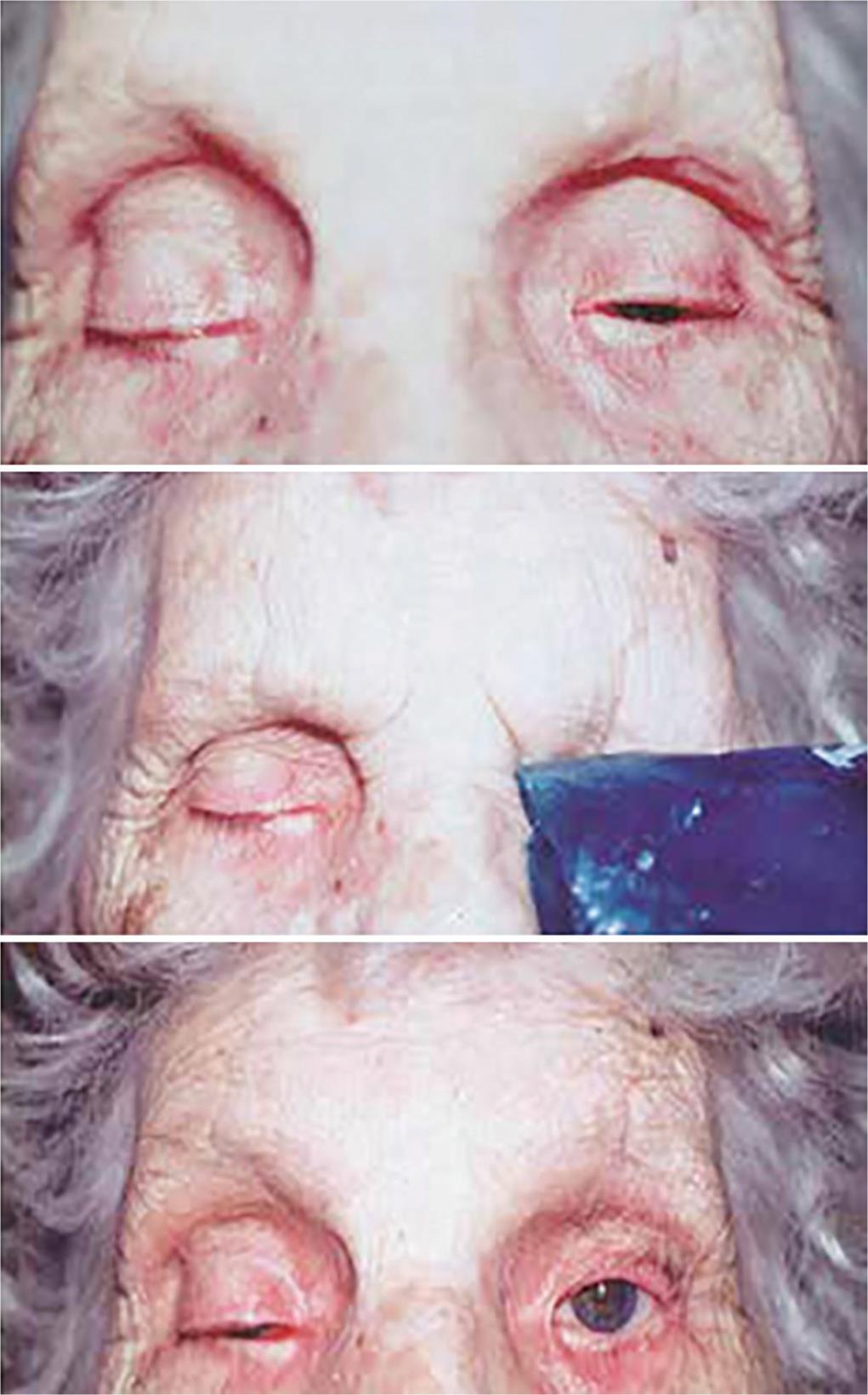 The acute renal failure which occurs due to snakebite is multifactorial:

Most of the patients of acute tubular necrosis recover within few weeks, with the help of occasional need of hemodialysis, but patients who develop cortical necrosis require renal replacement therapy on a long-term basis. It is hyperkalemia rather than elevated urea and creatinine that requires dialysis. Acute kidney injury (AKI) is a hypermetabolic hyperkalemia, which may kill the patient within a few minutes and calcium gluconate and glucose-insulin are mostly ineffective. Early urgent adequate treatment with ASV can reverse the whole process of deterioration of renal function, which is far from our expectation in our country. Renal failure is a common complication of Russell’s viper and hump-nosed viper bites.14 The contributory factors are intravascular hemolysis, DIC, direct nephrotoxicity, hypotension and rhabdomyolysis. Renal damage can develop very early in the case of Russell’s viper bite and even when the patient arrives at hospital soon after the bite, the damage may have already been done. Studies have shown that even when ASV is administered within 1 to 2 hours after the bite, it is incapable of preventing acute renal failure (ARF).

Pregnant women are treated in exactly the same way as other victims. The same dosage of ASV is given.15 The victim should be referred to a gynecologist for the assessment of any impact on the fetus.

Children receive the same ASV dosage as adults. The ASV is targeted at neutralizing the venom. Snake injects the same amount of venom into adults and children.

After discharge from hospital, the victim should be followed. If discharged within 24 hours, the patient should be advised to return if there is any worsening of symptoms, such as bleeding, pain, or swelling at the site of bite, difficulty in breathing, and altered sensorium. The patients should also be explained about serum sickness which may manifest after 5 to 10 days.

1. Kasturiratne A, Wickramsinghe AR, DeSilva N, et al. The global burden of snakebite: a literature analysis and modelling based on regional estimates of envenoming and deaths. PLOS Med 2008;5:e218.