Introduction: Gastrointestinal stromal tumors (GISTs) are nonepithelial tumors arising from the interstitial cells of Cajal, which express KIT protein-CD117 on immunohistochemistry. It represents a wide clinical spectrum of tumors with different clinical presentations, locations, histology, and prognosis. Gastro intestinal stromal tumours (GISTs) can arise anywhere in the GIT, including the mesentery, omentum, and retroperitoneum. Because most of these tumors are submucosal in location, they usually attain a large size without causing bowel obstruction at the time of diagnosis. This report presents a case of GIST in a 30-year-old male. The patient presented with acute abdomen without any symptoms of obstruction or perforation. He underwent ultrasonography in the radiology department which revealed a large mass along the small bowel with deposits along the mesentery and space occupying lesions (SOLs) in the liver. On contrast-enhanced computerised tomography (CECT), a possibility of GIST with deposits along the mesentery and liver was given, which was confirmed by histopathology.

Conclusion: Recognition and acquaintance with GISTs is primarily important for early detection which allows for more treatment options. These tumors are rare in people younger than 40 years of age, but can occur in people of any age.

Gastrointestinal stromal tumors (GISTs) are the most common mesenchymal malignancy of the GI tract.1

Specific immunohistochemical properties of GISTs for KIT (CD117, a tyrosine kinase growth factor receptor) have allowed GISTs to be distinguished from other mesenchymal tumors of the GI tract, such as leiomyomas, leiomyosarcomas, schwannomas, and neurofibromas.2

This is a report of a recent case of GIST of small intestinal origin. A 30-year-old male patient presented in the emergency department with complaints of acute abdomen and generalized tenderness over the abdomen. There were no complaints of constipation or diarrhea. On examination, the patient had marked guarding of the abdomen and tenderness to palpation. A myriad of provisional diagnoses for acute abdomen were considered.

On ultrasonography of the abdomen, a large mass of an approximate size of 10 × 8 cm was visualized in relation to small bowel in the mid abdomen (Fig. 1).

Few hypoechoic space-occupying lesions were seen in the liver (Fig. 2).

The patient was then advised to take the contrast-enhanced CT (CECT) scan of the abdomen.

On CECT, there was a large exophytic heterogeneously enhancing soft tissue density lesion with large central cavitation and air fluid level noted along the antimesenteric border of the distal third and fourth parts of duodenum and proximal jejunum (Figs 4 and 5).

The arterial supply was found to be predominantly from superior mesenteric artery (SMA).

No evidence of any bowel obstruction was noted.

Multiple heterogeneously enhancing nodular omental and mesenteric deposits were seen, the largest of them in the right lumbar region with central areas of necrosis (Fig. 6).

Marked fat stranding was seen in the omentum.

Few prominent sized lymph nodes were seen in the mesentery and para-aortic region, which was an unusual finding.

Few (at least 2) peripherally enhancing hypodense lesions were seen in segment VI of the liver (Figs 7 and 8).

On histopathological analysis, the tumor was confirmed to be GIST (Fig. 9). 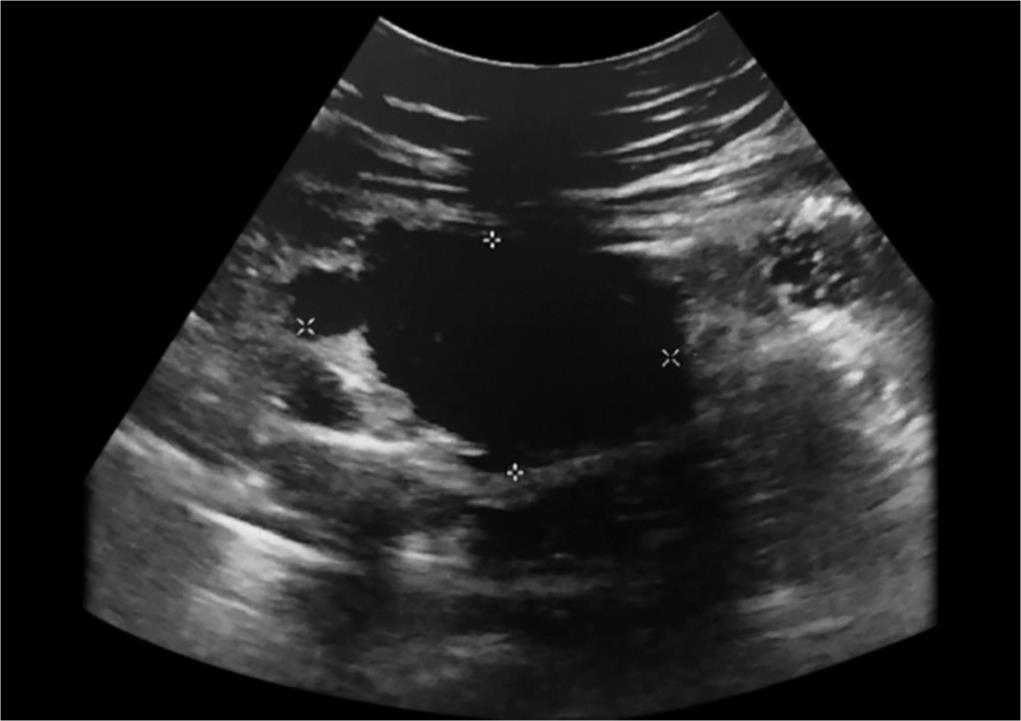 Fig. 1: Ultrasonography of abdomen shows a large mass of approximate size 10 × 8 cm in relation to small bowel in the mid abdomen 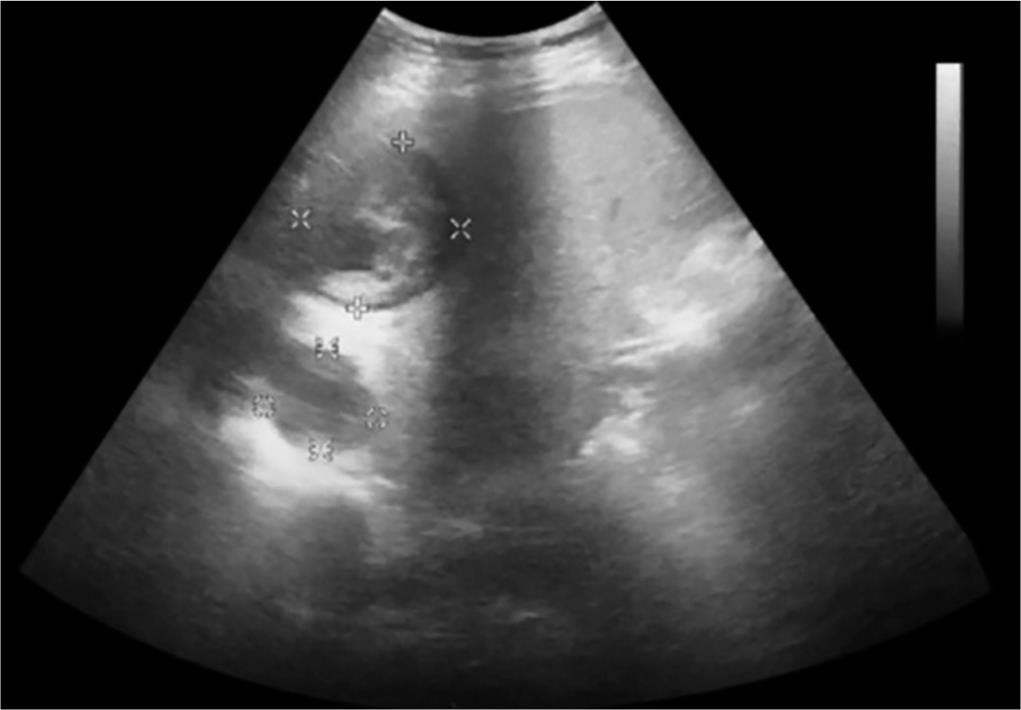 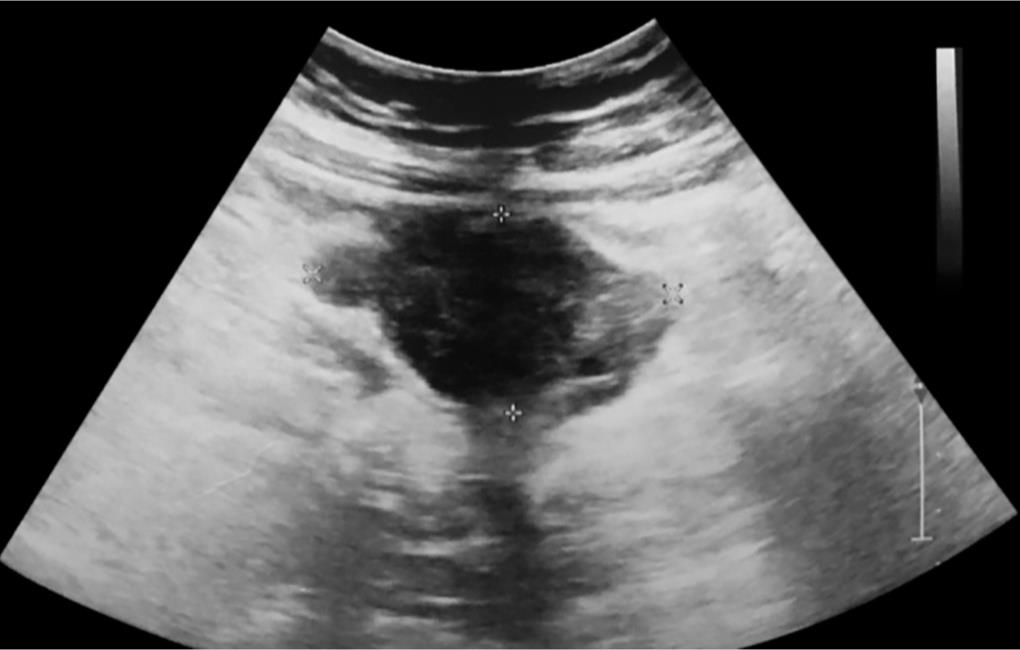 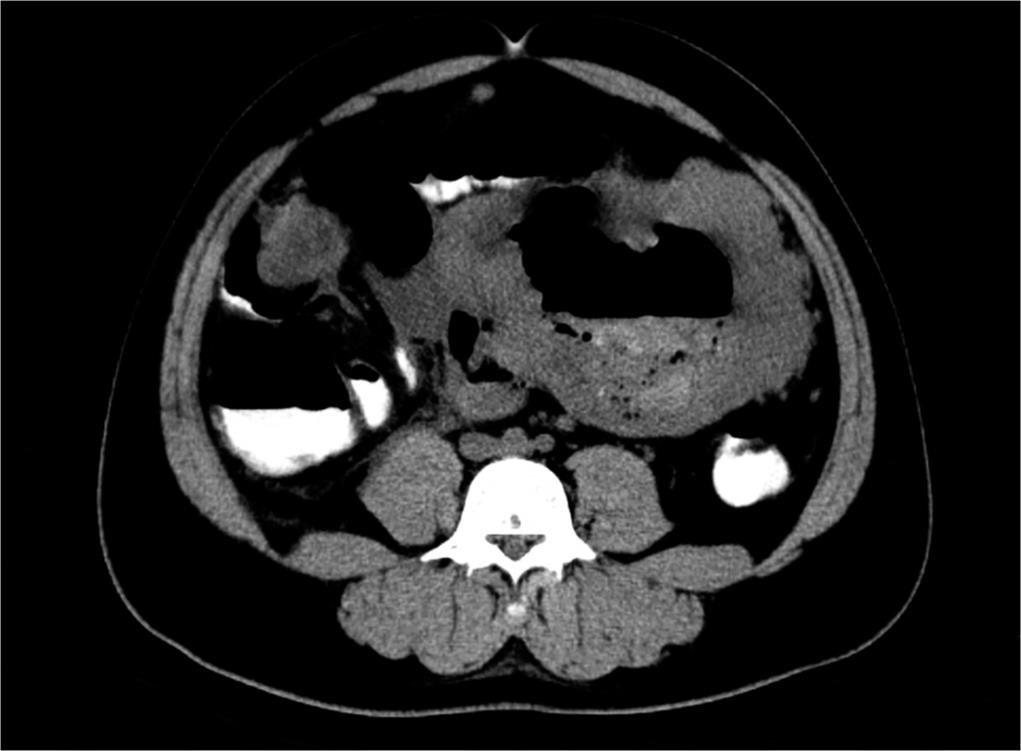 Fig. 4: On NECT of abdomen, a large exophytic mass is visualized with central cavitation and air-fluid level along the antimesenteric border of small bowel 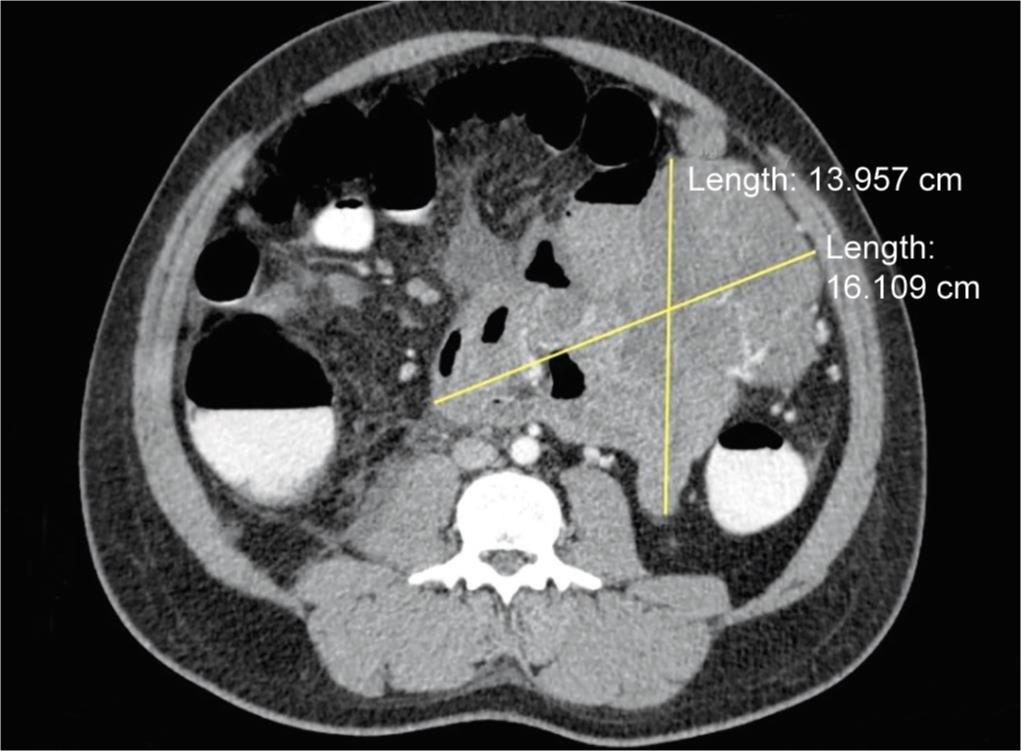 Fig. 5: On CECT of abdomen, the mass shows heterogeneous enhancement 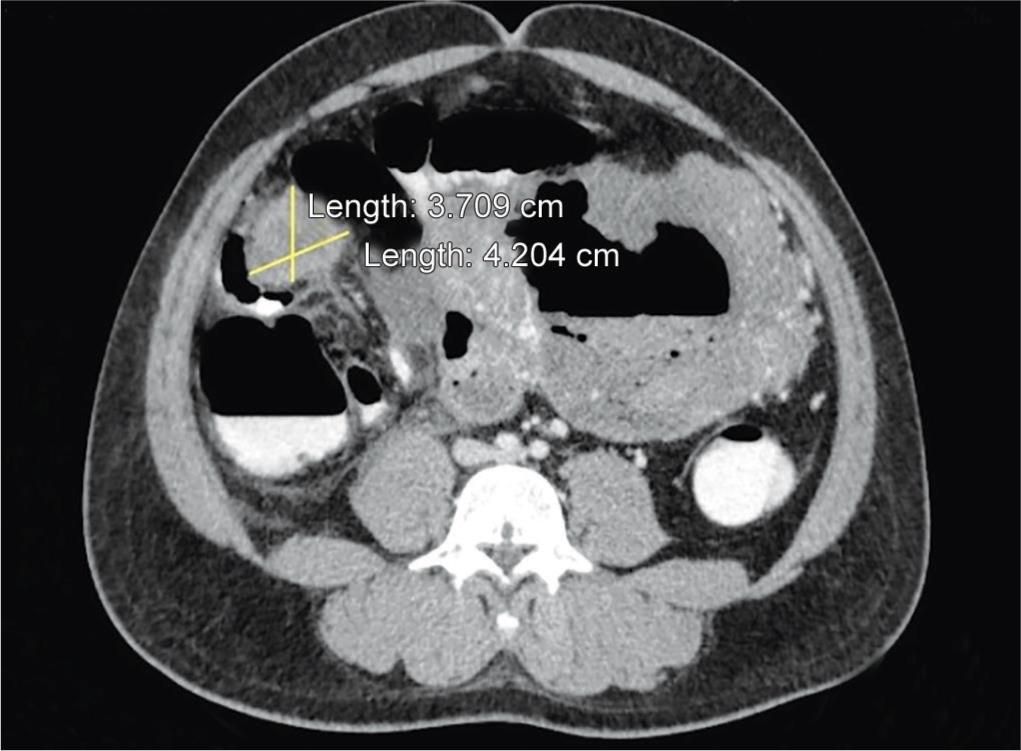 The spindle cells were found to be immunoreactive to CD117 (c-kit)/DOG1/CD34/smooth muscle actin and immunonegative to S100 protein.

Up to 94% of patients with GISTs express CD117 (KIT protein) and, thus, share similar markers with the interstitial cells of Cajal.3

Mutations in the KIT oncogene of GIST resulted in constitutive activation of KIT receptor tyrosine kinase in GISTs. Thus, KIT is not only the principal marker for diagnostic purposes, but also a specific target for systemic therapy.4 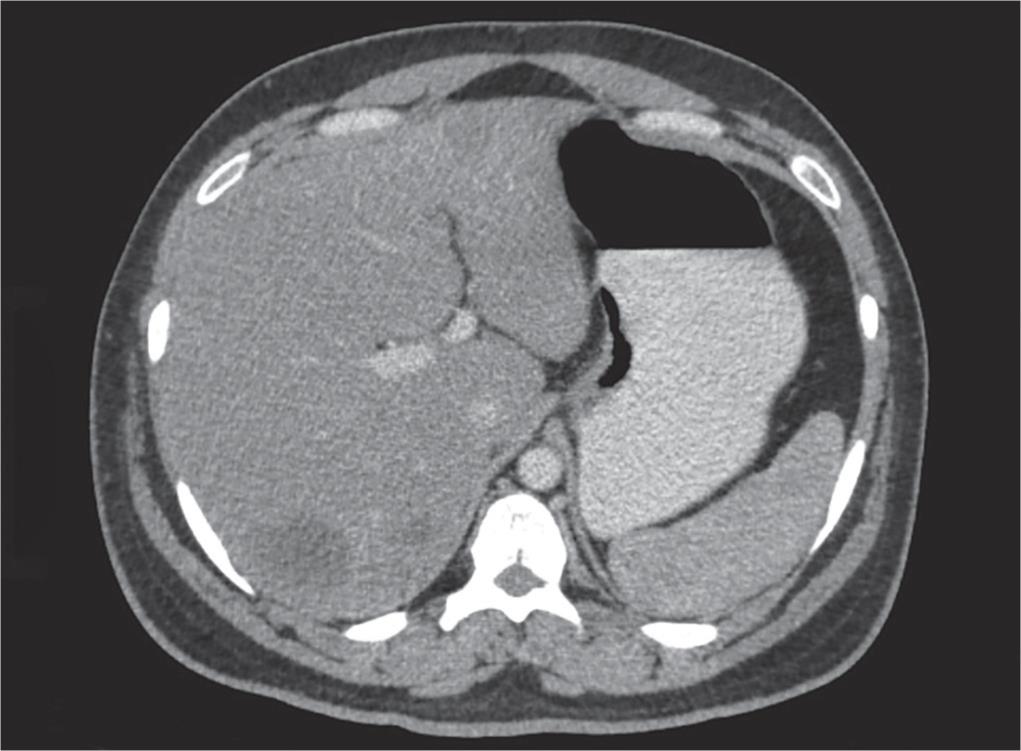 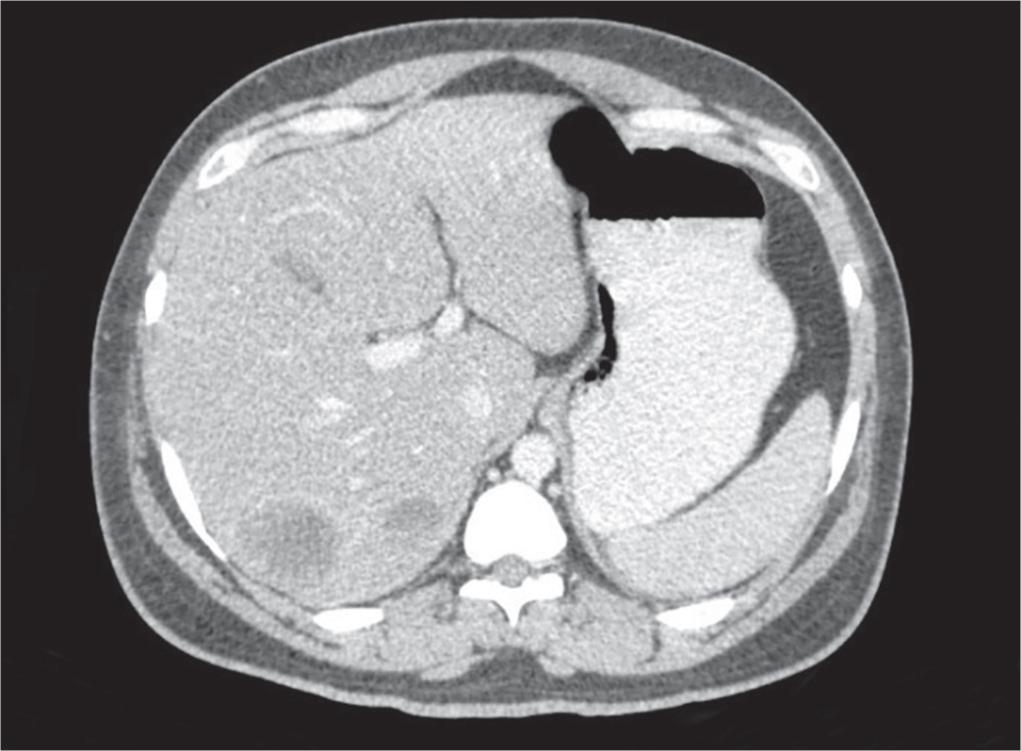 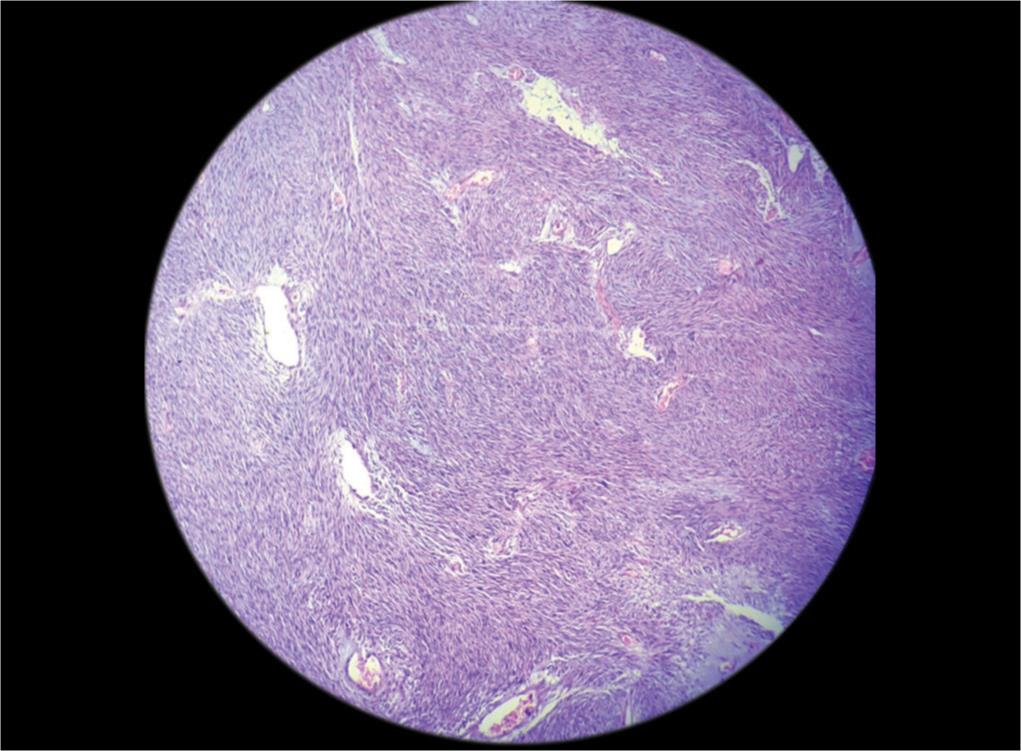 On CT and magnetic resonance imaging (MRI), this tumor appears as a large heterogeneous mass with areas of low attenuation from hemorrhage, necrosis, or cyst formation and often grows in an exoenteric pattern with a large extraluminal component.5

Severe hemorrhage within the mass, which is associated with hypervascular stromal tumors, produces a fluid–fluid level. Calcification is occasionally demonstrated.6

Even in the presence of a large tumor, the incidence of bowel obstruction is rare. Some large cavitary tumors may show aneurysmal dilatation of the lumen, which is regarded as a fairly specific finding of lymphoma.7

Lymphadenopathy is not a common finding.

Metastasis occurs by direct extension and the hematogenous route. However, intraperitoneal spread (peritoneal leiomyosarcomatosis) may occur by intraperitoneal seeding via ascitic fluid or by embolic metastases or rupture of the primary tumor and it is more commonly seen in significantly larger or exophytically growing tumors.8

The most common CT manifestations of peritoneal tumor seeding include multiple well-defined peritoneal nodules or masses with or without a smudged or granular pattern of omental infiltration.8

Lymphadenopathy is rare, and ascites may be seen but usually in a small amount. These CT findings may simulate those of peritoneal carcinomatosis from GI or ovarian malignancies.8