Purpose: Nonspecific nature of the disease in the newborn infant and less knowledge of the maternal disease prior to delivery makes the diagnosis a clinical challenge.

Case report: A rare case of one and a half month F baby who had fever since 3 weeks of age, after a month baby landed into neonatal intensive care unit because of missed diagnosis and reported to us with clinical signs of sepsis.

Investigations and results: X-Ray chest was suggestive of tuberculosis, presumptive diagnosis of tuberculosis made and baby started on anti tubercular therapy. Cartridge based nucleic acid amplification test was found positive in gastric aspirate. The baby started recovering and during that period mother developed symptoms of low grade fever, lethargy, headache and seizures. She was diagnosed as neurotuberculosis with evidence of multiple tuberculomas in MRI-Brain. This led to confirmation of diagnosis of congenital tuberculosis.

Conclusion: Most important clue for rapid diagnosis of congenital tuberculosis is maternal history of tuberculosis. Often, the mother's disease is discovered after the neonatal diagnosis is suspected. In summary, there is need to improve screening to identify and treat active tuberculosis in prenatal period, which decreases perinatal mortality and prevents occurrence of this serious disease in neonate. This case remarks difficulties on diagnosis and therapeutic management about this important severe disease in public health, and alert for development of protocols that foresee these difficulties.

A one and a half month old female baby presented with a history of fever since 3 weeks of age. Antenatal history was uneventful except mother being hepatitis B positive. Baby was the second in birth order, full-term normal vaginal delivery at a private nursing home, cried immediately after birth, and vaccinated for bacillus calmette-guerin (BCG), hepatitis B along with its immunoglobulin within 24 hours, top-fed, no history of contact, neonatal jaundice, or vertical infection. She was treated for 2 weeks as an outpatient by a practitioner and the baby deteriorated, developed respiratory distress, refusal to feed, and was quite sick, so shifted to neonatal intensive care unit (NICU) in a private nursing home. The baby was investigated and treated with many antibiotics for sepsis. The baby did not show any improvement. Parents left against medical advice and reported to us. On examination, the baby was pale with a heart rate of 166/min, a respiratory rate of 68/min; on pulse oximetry, O2 saturation was 90%; no cyanosis, icterus, pedal edema, and congenital anomaly. The weight of the baby was 3.2 kg and the rest anthropometry was within normal limits. The respiratory system revealed subcostal, intercostal recessions, flaring of alae nasi, and on auscultation, bilateral crepitations were present. The cardiovascular system was normal. There was hepatosplenomegaly, a liver span was 8 cm, and kidneys were not palpable. While taking the blood sample, the baby had a cardiac arrest, resuscitated, and was put on ventilator support for 3 days. Investigations revealed Hb—10.4 gm/dL, TLC—19,000/mm3; chest X-ray (Fig. 1) shows bilateral patchy infiltrates; cartridge-based nucleic acid amplification test (CB-NAAT) was positive (Fig. 2); liver function, renal function tests, electrolytes, random blood sugar, and serum calcium were within normal limits. Blood and urine cultures were negative. No acid fast bacillus (AFB) was seen on gastric lavage. The culture for AFB was negative. All contacts were screened for tuberculosis (TB) and none were positive. Child was treated with vancomycin and meropenem for sepsis in the beginning along with antitubercular therapy (ATT) presuming TB. Full supportive therapy was given. Gradually, child improved and was off O2 after 1 week with an evidence of improvement on chest X-ray (Fig. 3). The baby was discharged after 11 days of stay in NICU accepting full feed, and weight was gained with normal vitals. Mother complained lethargy, anxiety, and fever since 1 month, chest X-ray and montoux were negative, she refused endometrial biopsy. After 1 week, she complained of severe headache, MRI of brain showed multiple tuberculomas, developed seizures, hospitalized, and treated with ATT, steroids, and antiepileptics. A week later, she developed paraplegia and MRI of spine showed spinal TB, referred to a higher center by the treating physician. Diagnosis of congenital TB was confirmed when the mother developed neurotuberculosis. The baby recovered completely after 6 months of therapy. 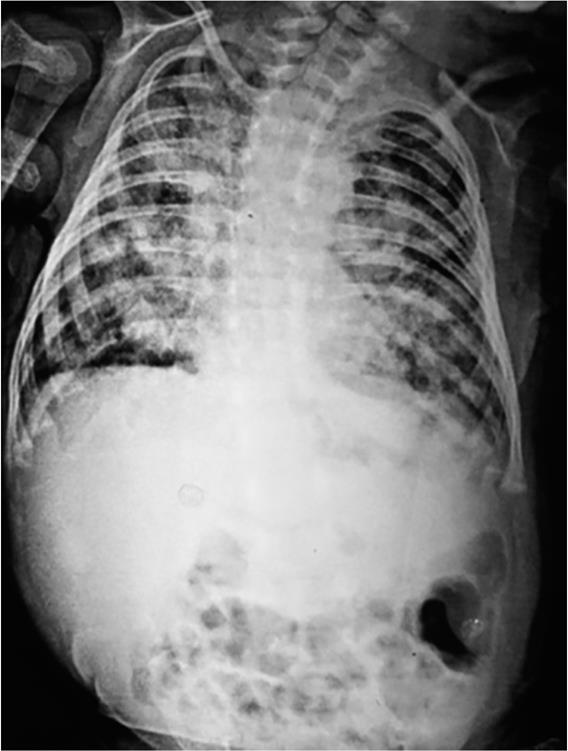 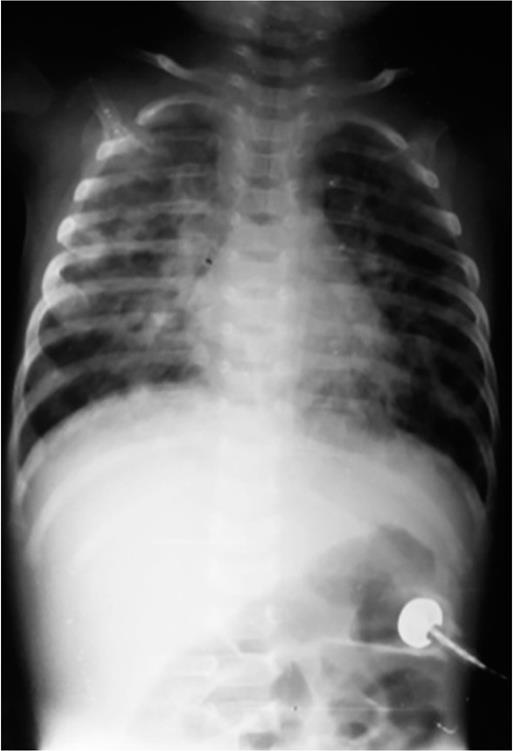 Perinatal TB in the neonate can be either congenital or neonatal. The only criterion for distinguishing congenital TB from postnatal acquired TB was first proposed by Beitzke in 1935 and revised by Cantwell et al. in 1994.5 According to the revised criteria, the infant must have proven TB lesions and, at least, one of the following: (i) lesions present in the first week of life; (ii) a primary hepatic complex or caseating hepatic granulomas; (iii) TB infection of the placenta or the maternal genital tract; or (iv) exclusion of the possibility of postnatal transmission by a thorough investigation of contact. Making an early diagnosis of TB in an infant is difficult as symptoms usually begin early (2–4 weeks), which mimic bacterial sepsis and other congenital infections.6 Besides, the median age of presentation of congenital TB is 24 days (range, 1–84 days), and the median age of diagnosis of TB in infants is 8 months (range, 3.5–12 months).5,8 Hepatomegaly (76%), respiratory distress (72%), fever (48%), and lymphadenopathy (38%) are the most common symptoms and signs of congenital TB.5 In our case, the majority of symptoms were present and chest X-ray led to presumptive diagnosis of congenital TB. Postnatal acquired TB was less favored due to early presentation of TB symptoms and a fourth criterion of Cantwell et al. was achieved. Thapar et al.7 also reported a neonate with congenital TB presenting as sepsis syndrome. Congenital TB has a very high mortality rate, and those presenting before 4 weeks have mortality up to 50%.2,5,9,11 In spite of difficult diagnosis, clinical suspicion and family history support diagnosis of congenital TB and precocious diagnosis avoids death in infancy period. In our case, the child after antibiotic therapy and oxygen support at a private hospital showed no resolution of symptoms and as soon as the ATT was initiated on the day of admission, respiratory distress and acceptance to feed improved within a week. For more than 60% of cases of perinatal TB, maternal TB disease was diagnosed after it was found in children.9 Extra pulmonary, miliary, and meningeal TB in mother are the high-risk factors for congenital TB in neonates.12 In this case, the mother was diagnosed as a case of neurotuberculosis when the baby showed evidence of recovery.

Congenital TB continues to be an unusual diagnosis in pediatric patients. The nonspecific nature of the disease in the newborn infant and the lack of knowledge of the maternal disease prior to delivery make the diagnosis a clinical challenge in both pre- and postnatal periods. The disease should be suspected in neonates that present respiratory distress, fever, and hepatosplenomegaly in the first 3 months of life; neonates with suspected sepsis not responding to routine antibiotic therapy where a bacterial or viral etiology have been excluded.10 In summary, there is a need to improve screening to identify and treat active TB in the prenatal period, which not only decreases perinatal mortality but also prevents the occurrence of this serious disease in neonate and a coherent system of cooperation between the hospital and community services, and between pediatricians and adult physicians is essential.

The authors have no financial relationships relevant to this article to disclose.