Background: The pancreaticobiliary pathologies are one of the most common routinely encountered disorders. The evaluation of a suspected pancreaticobiliary pathology is a common radiological problem and is routinely diagnosed by a variety of imaging modalities including ultrasonography (USG), computed radiography, and magnetic resonance cholangiopancreatography (MRCP).

Objectives: To study and compare the radiological features in pancreatic and biliary system pathology using USG and MRCP, and to compare the findings with histopathology results wherever available.

Materials and methods: The prospective study was carried out on 50 patients with suspected pancreaticobiliary pathologies who underwent both USG and MRCP.

Results: In our study of 50 cases, there were 34 (68%) female cases and 16 (32%) male cases with hepatobiliary pathologies. The female to male ratio was 2.1:1. The maximum number of 15 (30%) cases were between the age range of 41 years and 50 years. The dilatation of the biliary system was seen in 40 (80%) cases, cholelithiasis in 22 (44%), isolated choledocholithiasis in 16 (32%), cholecystitis in 3 (6%), pancreatic divisum in 3 (6%), choledochal cyst in 3 (6%), acute pancreatitis in 2 (4%) chronic pancreatitis in 4 (8%), and common bile duct (CBD) stricture in 2 (4%) cases; these are the most common pancreaticobiliary pathologies identified on MRCP. Ultrasonography was equally good in comparison to MRCP in identifying intrahepatic biliary radical dilatation, gallbladder distension, and cholelithiasis in 100% cases. However, the sensitivity and specificity of USG in detecting choledocholithiasis was low.

Conclusion: Though USG provides a good information about the presence of biliary obstruction, it does not suggest the possible cause in many cases. Hence, USG is regarded as an initial guide to select the patients for MRI examination. Magnetic resonance cholangiopancreatography is a highly sensitive noninvasive modality in the detection of the level and cause of the biliary obstruction.

The pancreaticobiliary pathologies are one of the most common, routinely encountered disorders in daily clinical practice. The evaluation of a suspected pancreaticobiliary pathology is a common radiological problem and is routinely diagnosed by a variety of imaging modalities including ultrasonography (USG), computed radiography, magnetic resonance cholangiography, and endoscopic retrograde cholangiopancreatography (ERCP).

The role of a radiologist is to accurately access the etiology, location, severity, and extent of the disease and to guide the clinician to choose the appropriate mode of treatment based on clinical, laboratory, and imaging findings.

Magnetic resonance cholangiopancreatography (MRCP) is a radiologic technique that produces images of the pancreaticobiliary tree that are similar in appearance to those obtained by invasive radiographic methods, such as ERCP. Magnetic resonance cholangiopancreatography takes advantage of the inherent contrast-related properties of fluid in the biliary and pancreatic ducts. Currently, the diagnostic accuracy of MRCP is considered to be equivalent to that of ERCP for a broad spectrum of benign and malignant pancreatic and biliary ductal diseases.2

Magnetic resonance cholangiopancreatography makes use of heavily T2-weighted pulse sequences, thus exploiting the inherent differences in the T2-weighted contrast between stationary fluid-filled structures in the abdomen (which have a long T2 relaxation time) and the adjacent soft tissue (which has a much shorter T2 relaxation time). Static or slow-moving fluids within the biliary tree and the pancreatic duct appear of high-signal intensity on MRCP, while the surrounding tissue is of reduced signal intensity.3,4

This prospective study was conducted in the Department of Radiodiagnosis, Guru Nanak Dev Medical College and Hospital, Amritsar, Punjab, from May 2017 to November 2019. A total of 50 patients with signs and symptoms related to biliary and pancreatic pathologies underwent USG, MRCP, and CT wherever needed for evaluation of biliary and pancreatic pathology. In all cases, a written informed consent was taken from them/guardian before conducting the study.

The investigations were done after fasting for 4 hours prior to the examination to reduce the motility to eliminate motion artifacts and to promote distension of the gallbladder (GB).

Transabdominal USG was performed on all 50 patients with suspected pancreaticobiliary pathologies with a convex probe (2–5 MHz), focusing mainly on the details of the GB, pancreas, and the biliary system. The findings were recorded in a proforma for comparisons. Magnetic resonance cholangiopancreatography is performed on a 1.5-T or superior MRI system, using a phased-array body coil. All protocols obtain heavily T2-weighted sequences. The most commonly obtained sequences were rapid acquisition and relaxation enhancement (RARE), fast-recovery fast spin-echo (FRFSE) coronal oblique 3D respiratory triggered, and half-Fourier acquisition single shot turbo spin echo HASTE axial 2D breath hold sequence which provide superior images and can be performed in single breath hold (%3C;20 seconds) and a fat-suppressed sequence, additional sequence that can be acquired to evaluate duct wall is a fat-suppressed T1-GRE sequence. For optimum visualization of ducts, acquired images are reformatted in different planes using multiplanar reconstruction (MPR) and maximum intensity projection (MIP). The advantage of FRFSE, as a 3D technique, is the ability to perform MPRs.4 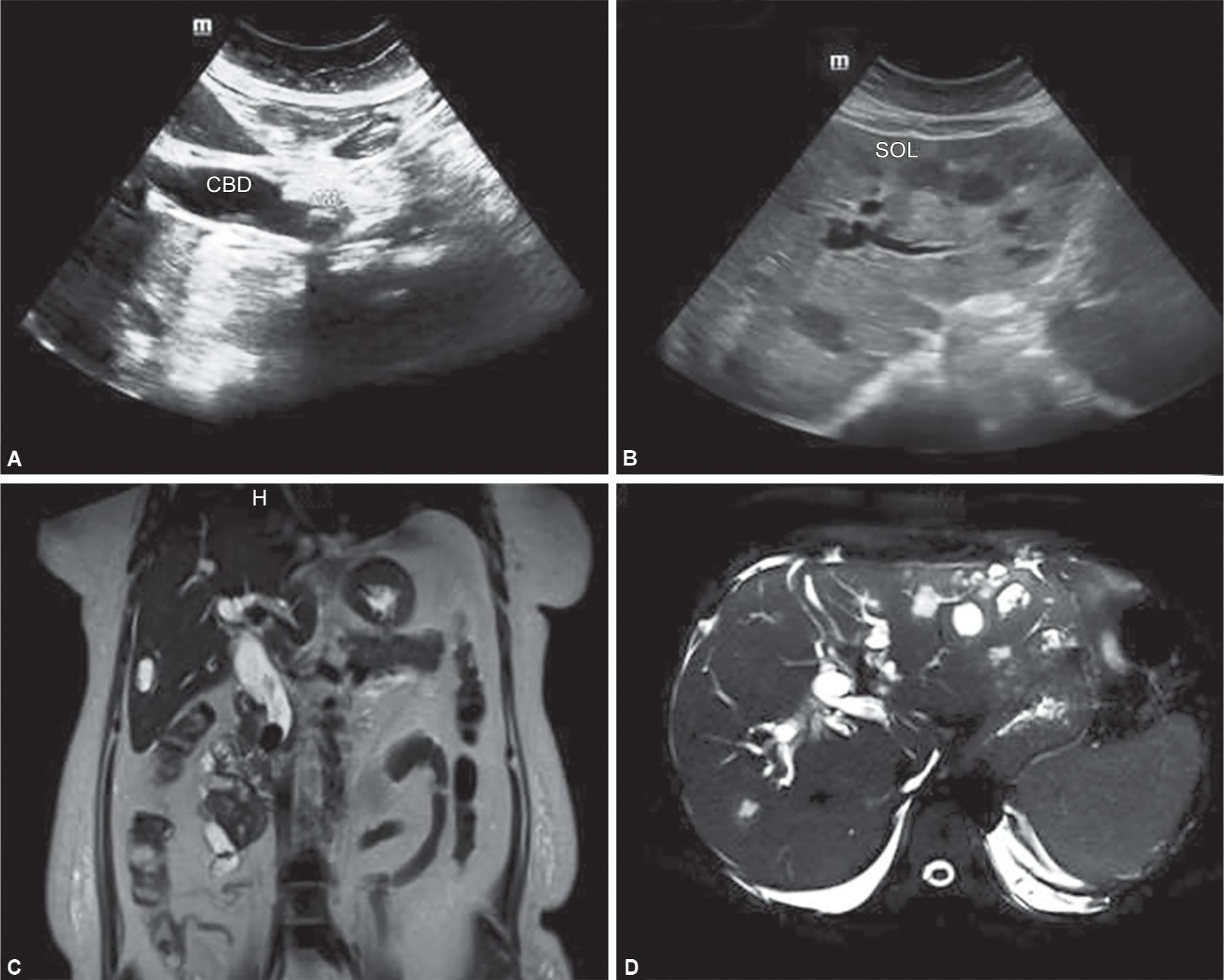 Figs 1A to D: (A and B) Ultrasound showing a well-defined calculus at the distal end of common bile duct with distal acoustic shadowing. The proximal common bile duct shows dilatation with a minimal sludge layering along its dependent part. Ill-defined cystic areas seen in the liver metastasis; (C and D) Magnetic resonance cholangiopancreatography T2-weighted sequence in Coronal plane of same patient showing better depiction of the calculus in distal common bile duct (arrow) with well delineation of whole of common bile duct and intrahepatic biliary radicles. The multiple cystic lesions scattered in both the lobes of liver was metastasis

The cholelithiasis was the most common pathology identified in 22 (44%) patients both on USG and MRCP, and similarly cholecystitis was seen in 4 (8%) cases on both USG and MRCP.

Magnetic resonance cholangiopancreatography is highly accurate in the diagnosis of anatomic variants of the biliary tree that may increase the risk of bile duct injury during laparoscopic cholecystectomy.14 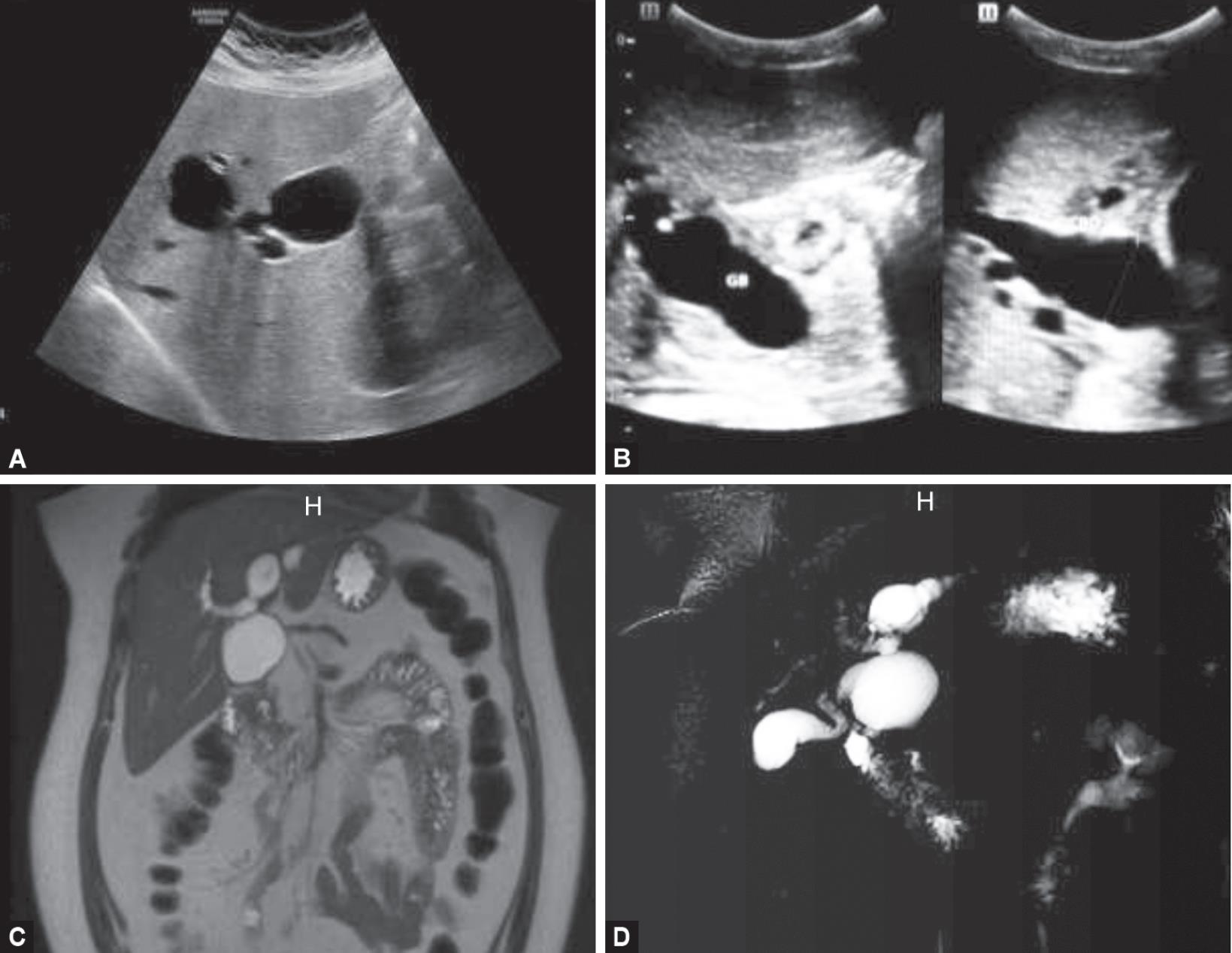 Figs 2A to D: Choledochal cyst (type IVB—Todani classification): (A and B) Ultrasound showing the saccular type of dilatation of the common bile duct with similar sacculation in relation to the left intrahepatic biliary duct; (C and D) Magnetic resonance cholangiopancreatography confirms saccular dilatations in relation to the main common bile duct and the left hepatic duct suggestive of intrahepatic and extrahepatic saccular type of choledochal cyst 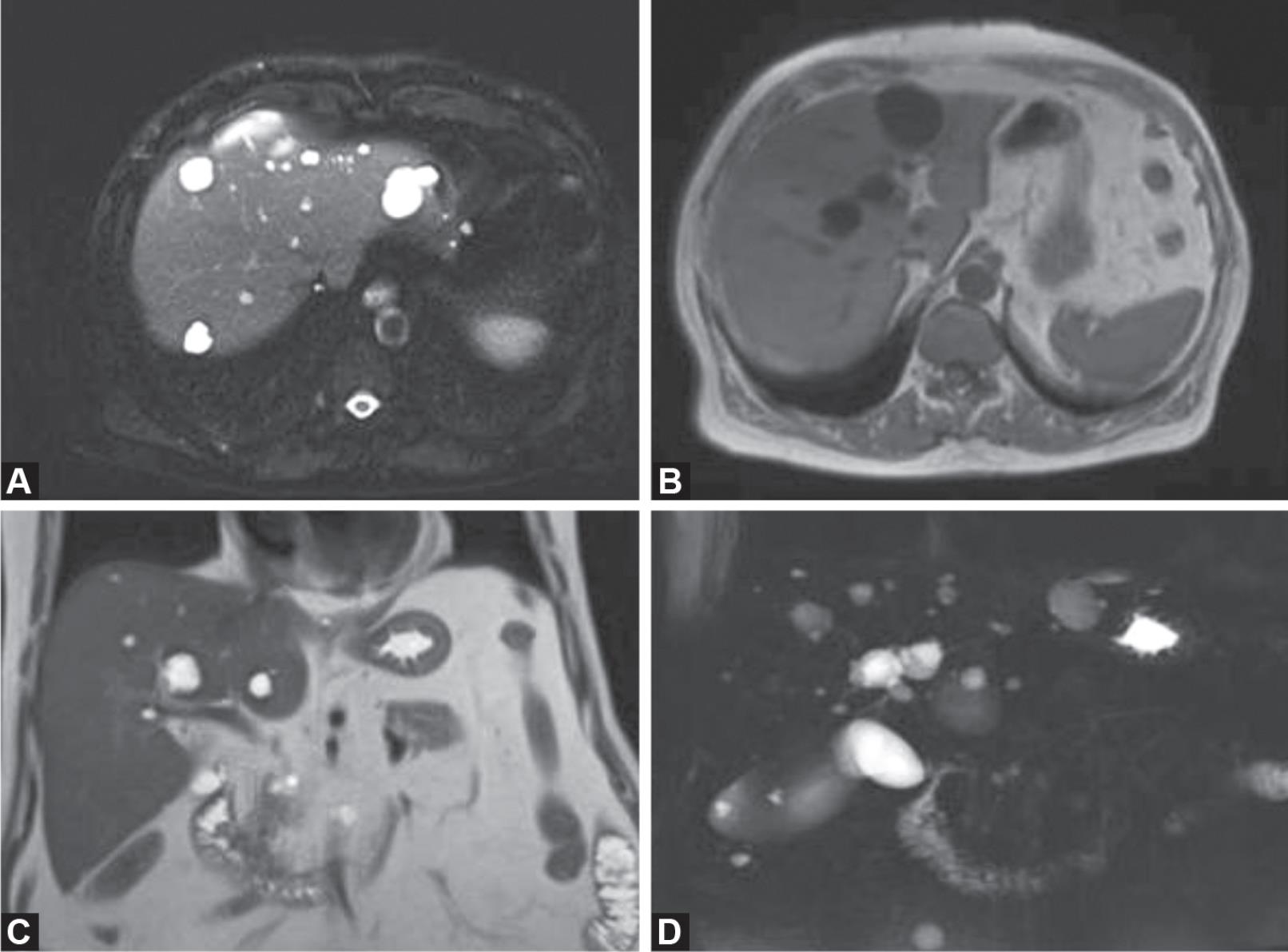 Figs 3A to D: Caroli’s disease (type V choledochal cyst) congenital cystic dilatation of the intrahepatic biliary tree. Multiple well-defined cystic lesions seen in relation to both the lobes of liver, distributed at the periphery. On magnetic resonance cholangiopancreatography 3D recon, they appear to be communicating with the biliary radicles—Caroli’s disease 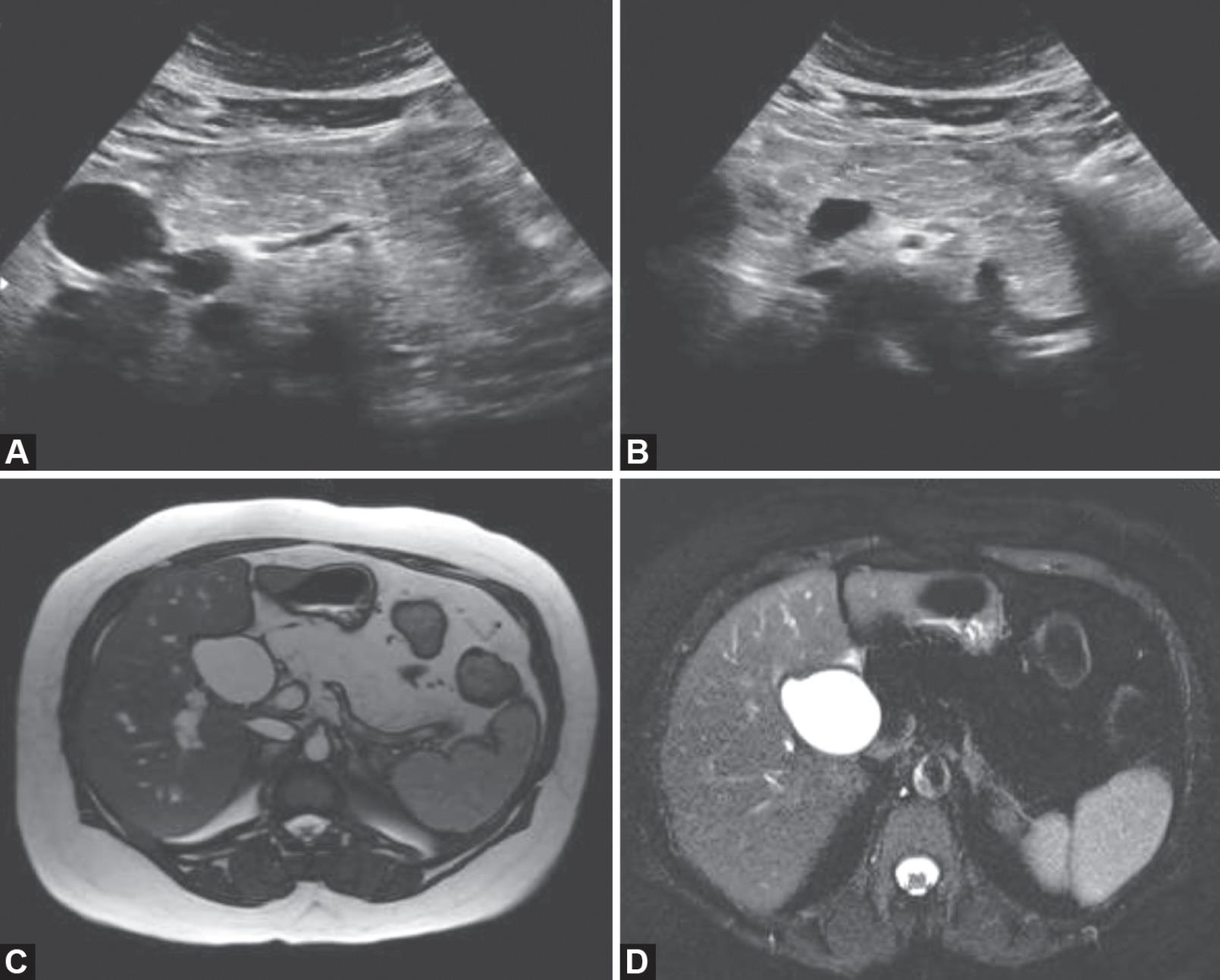 Figs 4A to D: Type II choledochal cyst with pancreatic lipomatosis: (A and B) Ultrasound showing a saccular type of dilatation of common bile duct. The pancreas was bulky in nature with markedly increased echogenicity suggestive of fatty infiltration; (C and D) Magnetic resonance cholangiopancreatography shows saccular dilatation of common bile duct with the bulky pancreas and markedly reduced intensity on theT2W sequence—choledochal cyst with pancreatic lipomatosis 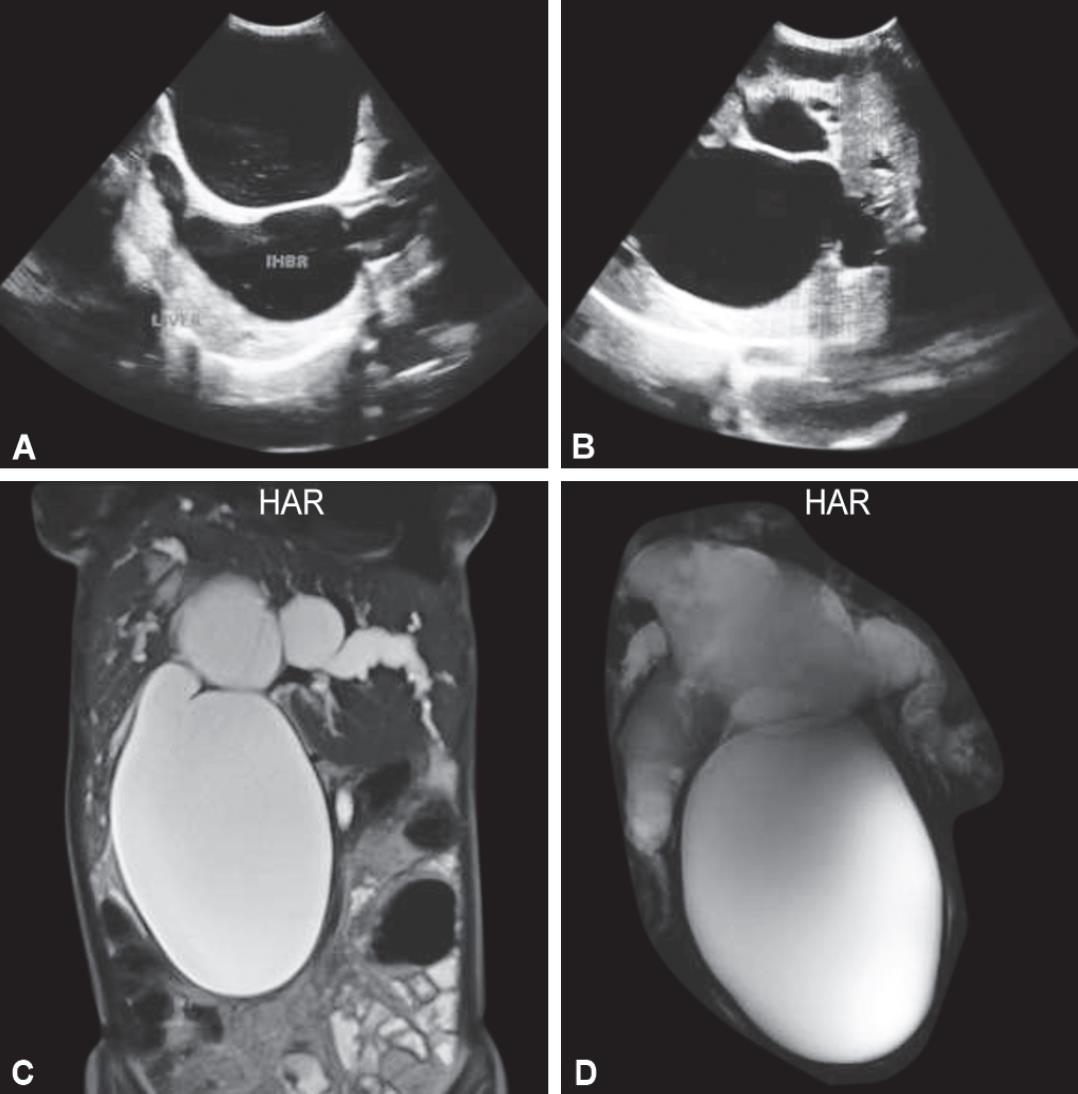 The GB carcinoma was identified in 10 (20%) patient on both USG and MRCP, which was confirmed on histopathology. Shadan et al.11 reported carcinoma GB in 4% cases, while Bhatt et al.12 reported it in 2% cases. The sensitivity and specificity, of both USG and MRCP was 100%. This is comparable with the previous study conducted by Attri et al.10 where MRCP was highly diagnostic with sensitivity, specificity and accuracy of 100% each. All the cases diagnosed as GB mass in our study were diagnosed as adenocarcinoma on histopathologic evaluation. 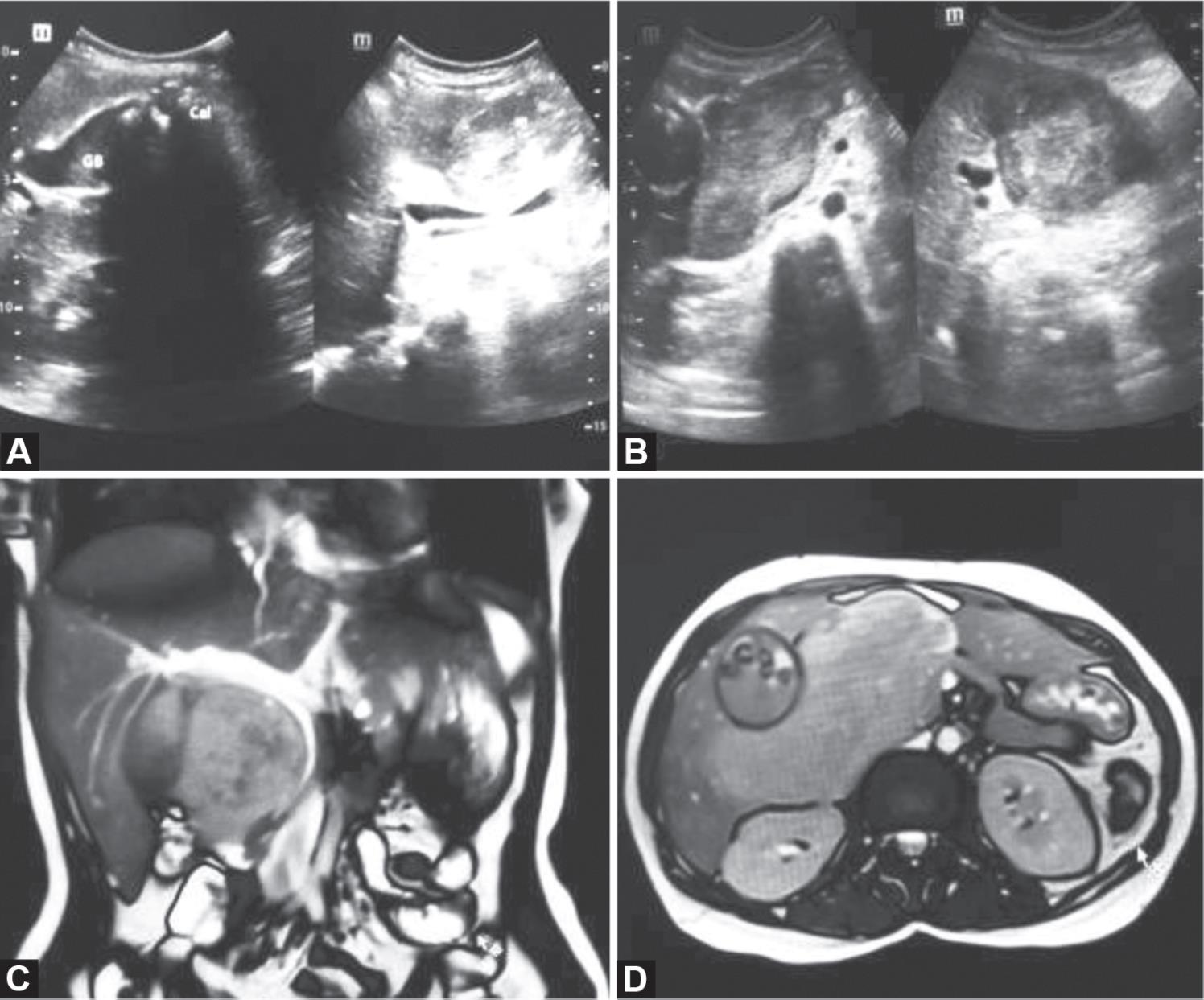 Figs 6A to D: Diffuse infiltrating type of gallbladder carcinoma: (A and B) Ultrasound showing a large irregular-shaped mass in relation to anterior wall of gallbladder, with multiple calculi and sludge in its lumen. The mass is diffusely infiltrating into the adjacent hepatic parenchyma merging imperceptibly with it. The common bile duct was compressed; (C and D) Magnetic resonance cholangiopancreatography shows a large irregular gallbladder mass with infiltration into the adjacent hepatic parenchyma. Note the common bile duct is better visualized and is displaced and stretched by the mass—a typical gallbladder carcinoma 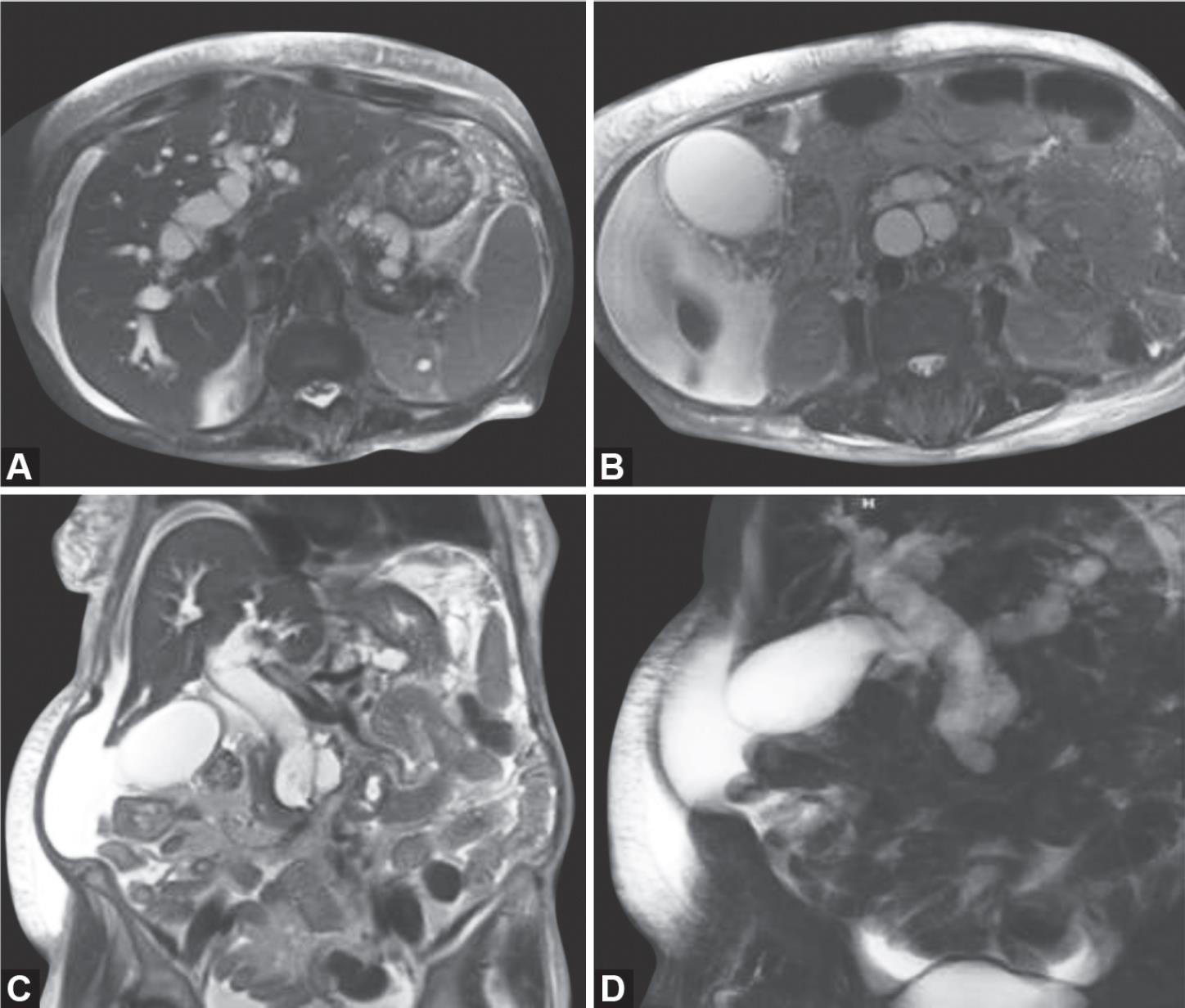 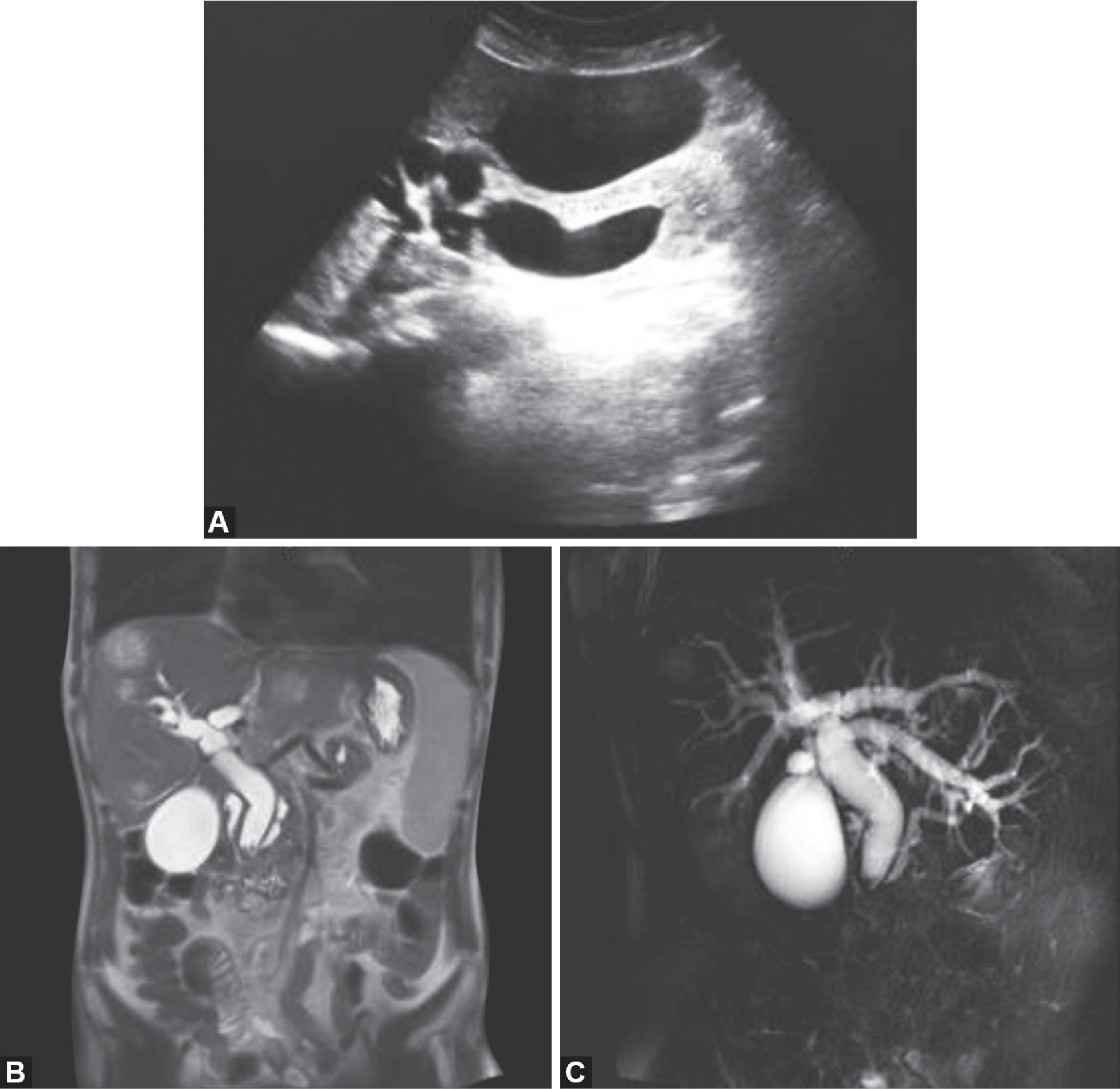 It was noted that the percentage distribution of cholangiocarcinoma in our study closely matches with a study done by Soto et al.16 The percentage distribution of the carcinoma of the pancreas in our study is low compared to the other studies. The overall of the sensitivity and specificity of USG and MRCP in the diagnosis of pancreatic mass were 100%. In the study conducted by Kaur et al.,9 the sensitivity of USG in diagnosing carcinoma pancreas was 75% because of obscuration of the head of the pancreas by bowel gas shadows. The sensitivity and diagnostic accuracy of MRCP is 100%, which is same as our study.

In our study, a case of hydatid cyst of the liver was noted on MRCP, i.e., one (2%) patient, which was misdiagnosed as a simple hepatic cyst on USG, which is comparable to the study conducted by Shadan et al.,11 which showed one (2%) case of the hydatid cyst.

Tamura et al.18 reported that overall sensitivity and specificity values of MRCP for delineating pathologic pancreatic changes were 88 and 98%, respectively. In our study, the cases of chronic atrophic pancreatitis were detected with a sensitivity of 75% and specificities of 100% on USG compared to MRCP.

Overall, the pathologies causing obstructive biliopathy included both benign and malignant lesions. The benign lesions constituted 55% (22/40) cases, and malignant lesions constituted 45% (18/40) cases. The most common benign cause was calculus. The accuracy, sensitivity, and specificity of USG compared to MRCP in the diagnosis of being 81, 91, and 88%, respectively. The most common cause of obstruction in malignant pathology was cholangiocarcinoma. The sensitivity, specificity, and accuracy of USG in the diagnosis of malignant diseases were 70, 100, and 94%, respectively, compared to MRCP. 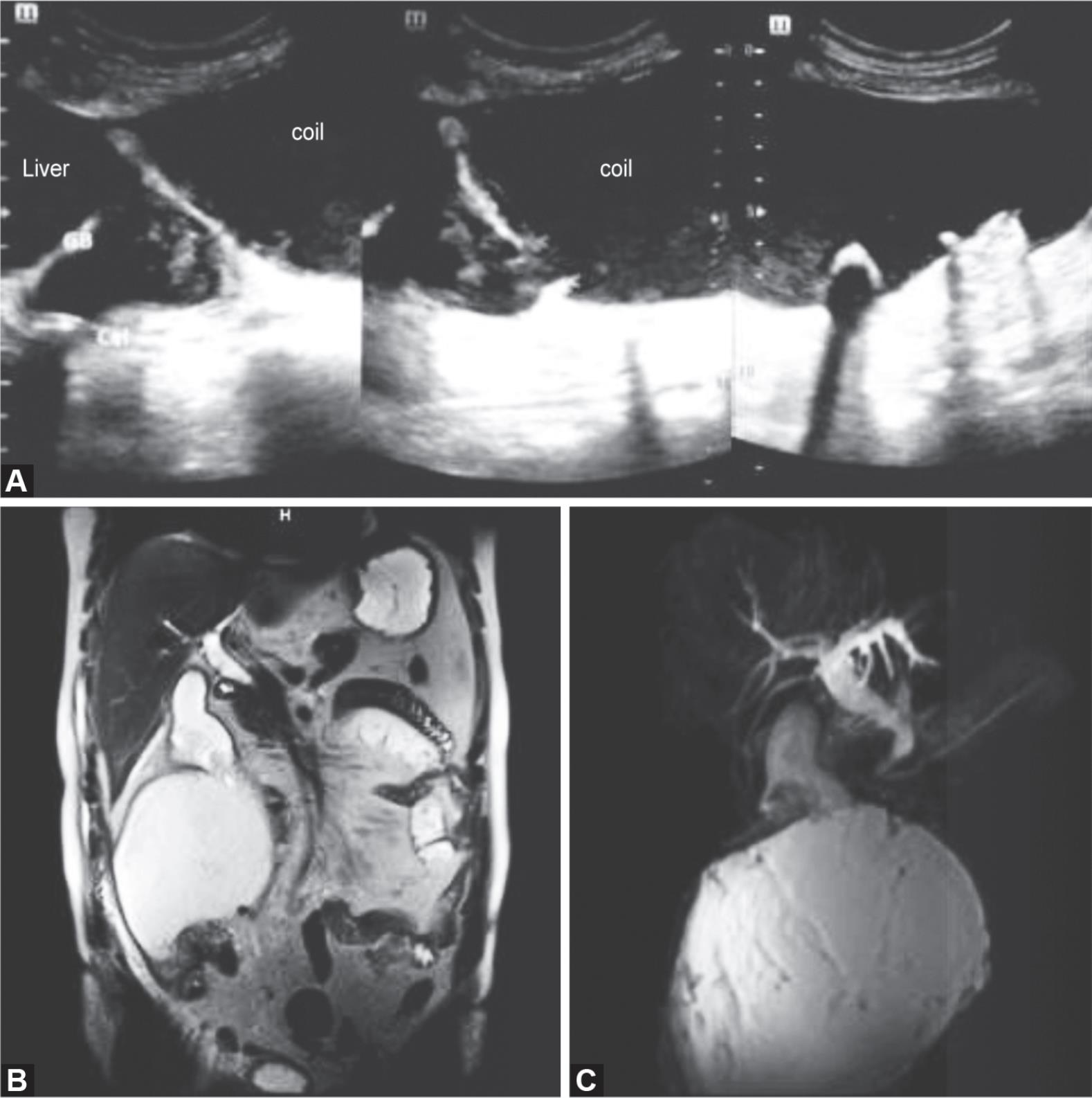