Aim: Retroperitoneal soft-tissue sarcomas are relatively uncommon diseases, and the most frequent histotype, ranging from 20 to 45% of all cases, is represented by liposarcoma, which is a hard-to-treat condition for its local aggressiveness and clinical aspecificity.

Presentation of case: We report a case of a 69-year-old woman who underwent surgical resection for a giant pleomorphic retroperitoneal liposarcoma.

Discussion: Currently, chemotherapy for retroperitoneal soft-tissue sarcomas is not effective, and radiotherapy has limited efficacy due to the toxicity affecting adjacent intra-abdominal structures and showed validity only in case of high-grade malignancy by reducing local recurrence but with no advantage in overall survival. Nowadays, complete surgical resection remains the most important predictor of local recurrence and overall survival.

Conclusion: The removal of a retroperitoneal sarcoma of remarkable size is a challenge for the surgeon owing to the anatomical site, the absence of an anatomically evident vascular-lymphatic peduncle, and the adhesions contracted with the contiguous organs and great vessels. Therefore, we believe that, particularly for large-sized diseases associated with high-grade malignancy, a complete surgical resection with the removal of the contiguous intra- and retroperitoneal organs when infiltrated represents the only therapeutic option to obtain a negative margin and therefore an oncological radicality.

Among the retroperitoneal sarcomas that represent the 10–15% of all soft-tissue sarcoma, the most common histotype is represented by liposarcoma, which ranges from 20 to 45% of all cases.1,2 It commonly occurs in patients aged 40–60 years old with a 1:1 ratio between male and female. The liposarcoma may have weight and dimension variable: those over 20 kg are called giant liposarcomas and are extremely rare.3 We report a case of liposarcoma even more uncommon for its origin from perirenal fat: in fact approximately 13% are located in the retroperitoneal area and less than 1/3 of these arise from perinephric fat.4

We report the case of a 69-year-old male who was referred to our observation for a progressive volumetric increase of the abdomen.

All relevant investigations were done. Ultrasonography (USG) abdomen demonstrated a large lesion with ill-defined area measuring 20 × 17 × 13 cm in the right lumbar and right iliac region with extension into pelvis, posterior to anterior abdominal wall displacing the bowel loops superiorly and toward left side. Right kidney is displaced posteriorly, suggestive of liposarcoma. 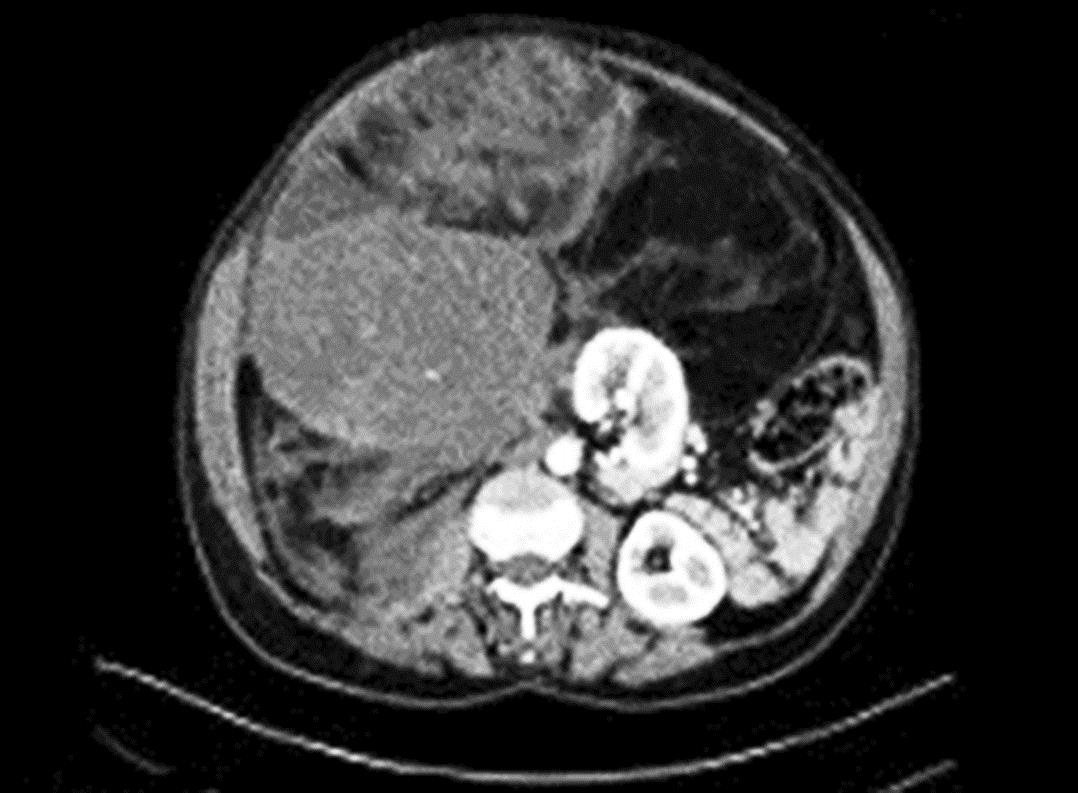 Fig. 1: Computed tomography scan showing the presence of the bulky lesion stretching from the subhepatic region to the pelvic cavity 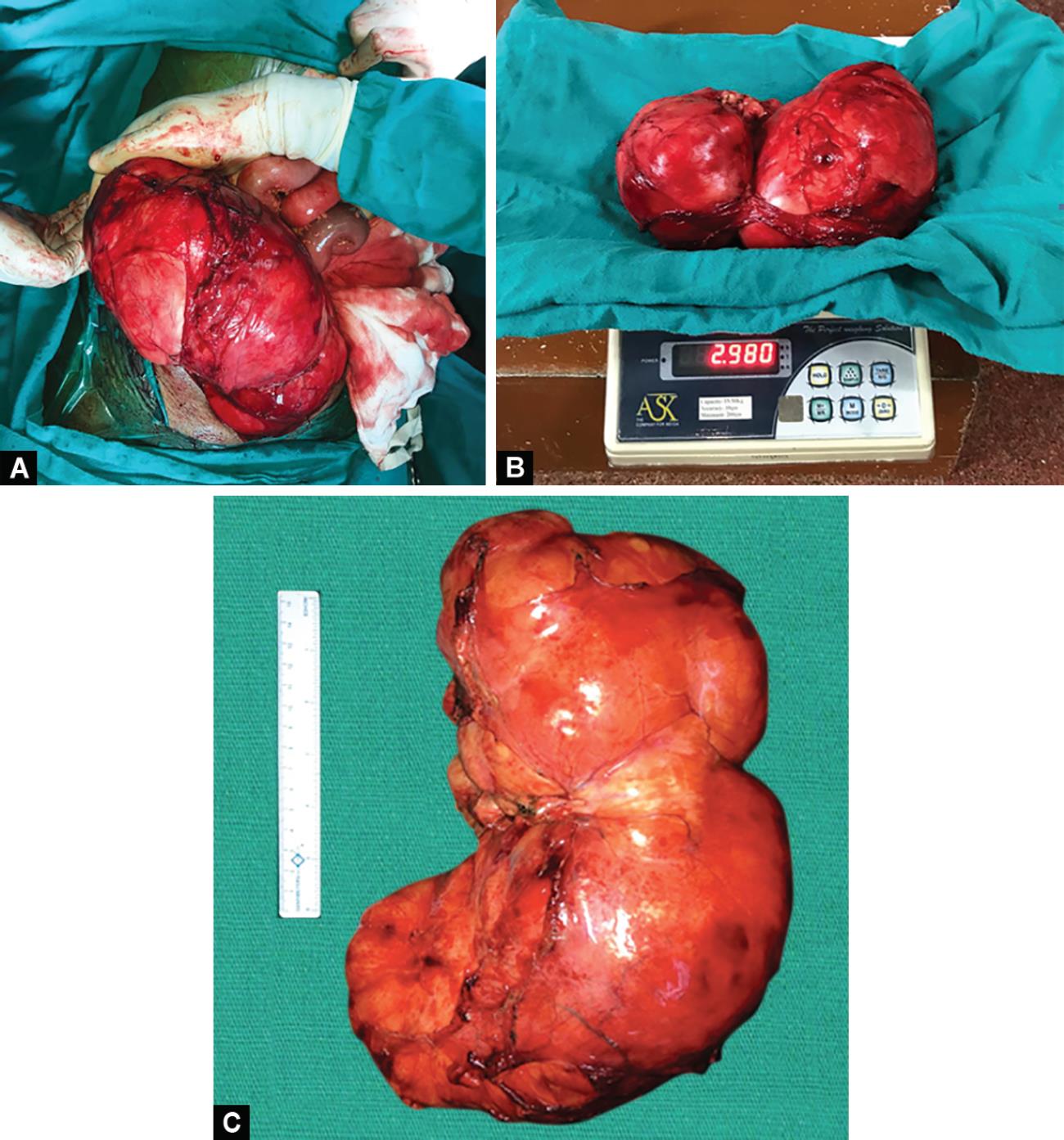 B/L DJ stenting was done to preserve ureters 2 days prior to surgery under spinal anesthesia. The patient was taken up for an explorative laparatomy under general anesthesia (GA) which revealed the presence of a bulky lesion of 2.9 kg originating from the retroperitoneal region as shown in Figure 2, respectively.

The postoperative course was uneventful, and the patient was discharged on the seventh postoperative day. After 3 weeks, DJ stent was removed. The definitive histological diagnosis was liposarcoma—well differentiated, with free resection margin. At 2 months of follow-up, the patient is disease free.

The retroperitoneal liposarcomas are generally neoplasms with a low or intermediate grade of malignancy. The occurrence of hematogenous metastasis is a rare finding at the time of diagnosis; the lung represents the main site of distant metastasis. From a histologic point of view, in according to the morphological characteristics and on the strength of cytogenetic aberrations, now widely accepted, we can divide the liposarcoma in 4 types undifferentiated, pleomorphic, well differentiated, myxoid/round cell.5 The undifferentiated and pleomorphic types are neoplasm with high grade of malignancy accompanied by remarkable biological aggressiveness and with metastatic potential, while well-differentiated and myxoid/round cell forms are tumors with a low grade of malignancy, associated with a more favorable prognosis.6

The resection of a retroperitoneal sarcoma of remarkable size is a challenge for the surgeon owing to the anatomical site, absence of an anatomically evident vascular-lymphatic peduncle that makes it hard to obtain a safe margin, and adherences with the contiguous organs and with the great vessels. Therefore, the retroperitoneal liposarcoma shows a high rate of local recurrence after surgical excision. Actually, the overall survival at 5 years for the various histological subtypes, well-differentiated, myxoid/round cell, undifferentiated, and pleomorphic, ranges from 90, 60–90, 75, and 30–50%, respectively.7

Actually, the chemotherapy treatment used in the adjuvant or neoadjuvant setting has no benefit in the clinical course of the disease. Doxorubicin only yields a response rate of 18–29%. The antibiotic salinomycin, a potassium ionophore, appears to increase the chemosensitivity to the doxorubicin; so, it may be used to decrease the doxorubicin dosage and its toxic side effects.8 Neoadjuvant therapy may be taken into account in cases of dedifferentiated liposarcoma, which has an increased risk of recurrence and metastasis. It is necessary for an accurate subtype-specific diagnosis to evaluate the neoadjuvant therapy.

Our case shows some peculiar characteristics: first, its origin from perirenal fat, in fact approximately 13% are located in the retroperitoneal area and less than 1/3 of these arise from perinephric fat, and, second, the huge size (20 × 17 × 13 cm) of liposarcoma. Actually, the surgical approach represents the only therapeutic option that can provide a concrete perspective of care considering lack of support of effective complementary therapies. An aggressive surgical attitude that includes extended resections of the extra- and intaperitoneal structures is justified, especially in tumors of large size, to obtain a microscopic radicality of resection margins.