Background: Obesity is a major public health epidemic and is associated with increased risk of heart failure and mortality. We evaluated the impact of body mass index (BMI) on the prevalence of diastolic dysfunction (DD).

Results: Our study consisted of 100 patients with normal LVEF, in which DD was assessed. Fifty-five (55%) were females and 45 (45%) males. Majority of patients were in the age group of 4th to 6th decade of life. Diastolic dysfunction was present in 81 (81%) patients. Patients who had BMI >25, 21 out of 21 (100%) had DD. In this study, there was statistically significant correlation found between BMI and prevalence of left ventricular diastolic dysfunction (LVDD) with p value of 0.003. There was a linear increase in prevalence of DD with increasing age out of 100, 38 patients had left atrial (LA) size >40 mm.

The prevalence of obesity is steadily increasing worldwide, and constitutes a major health issue because of its association with morbidity, mortality, and cardiovascular diseases.1 Obesity is an independent predictor of incident heart failure in the general population. An increase in body size, besides being associated with cardiovascular risk factors, such as hypertension, diabetes, and hyperlipidemia, directly affects cardiac structure and function.2

The excess in body fat determines an increase in both preload and afterload due to a hyperdynamic circulation, chronic volume overload, and increase in peripheral resistance. As a result, left ventricular (LV) dilation and increased LV mass are frequent findings in individuals with increased body weight, with both eccentric and concentric LV geometric patterns described in these conditions.3,4

Diastolic filling is usually classified initially on the peak mitral flow velocity of the early rapid filling wave (E), peak velocity of the late filling wave caused by atrial contraction (A), E/A ratio, and deceleration time (DT), which is the time interval for the peak E velocity to reach zero baseline. Comprehensive assessment of diastolic filling and estimation of filling pressures by echocardiography require color M-mode of mitral inflow for propagation velocity sometimes with an alteration in a loading condition.5,6

A total of 100 patients with normal ejection fraction both admitted and OPD patients visiting at echocardiographic clinic at SGRD Hospital, Amritsar, of both sexes were studied. The study sample was including both nonobese (body mass index (BMI) <25.0 kg/m2) and obese (BMI >25.0 kg/m2) randomly, not divided into two groups. This was a cross-sectional study conducted out at OPD/IPD of SGRD Hospital, Vallah, Amritsar over a period of 2 years from January 2018 to December 2019. Written consent for the trial was obtained from all patients after examining them in detail.

Patients were verified after fulfilling inclusion criteria and ruled out for the presence of exclusion criteria. All patients and their relatives were informed about the study in their vernacular language. Written consent was taken. A detailed history of each patient was taken. Complete clinical examination was performed and all the routine investigations like complete blood count, renal function test, urine complete examination, fasting lipid profile (serum cholesterol, serum triglyceride), serum electrolytes—Na+, K+, liver function tests, electrocadiography (ECG), chest X-ray, and ultrasonography (USG) abdomen were performed.

All subjects were subjected to an echocardiogram to assess the presence of diastolic dysfunction (DD). Echocardiographic assessment was performed in 2D mode, M-mode, and Doppler mode using color flow mapping. Each patient was examined in left lateral recumbent position using standard parasternal, short axis, and apical views. From the pulsed Doppler spectrum of mitral flow, the following measurements were made.

A total of 100 patients with normal ejection fraction of both sexes were studied. The study sample was including both nonobese (BMI <25.0 kg/m2) and obese (BMI >25.0 kg/m2).

The most common age group affected from DD was >60 years accounting for 35.8% (29 out of 81) of patients affected by dysfunction. In this study, there was significant correlation seen between age of patients and prevalence of left ventricular diastolic dysfunction (LVDD) with p value of 0.012 (Table 1). 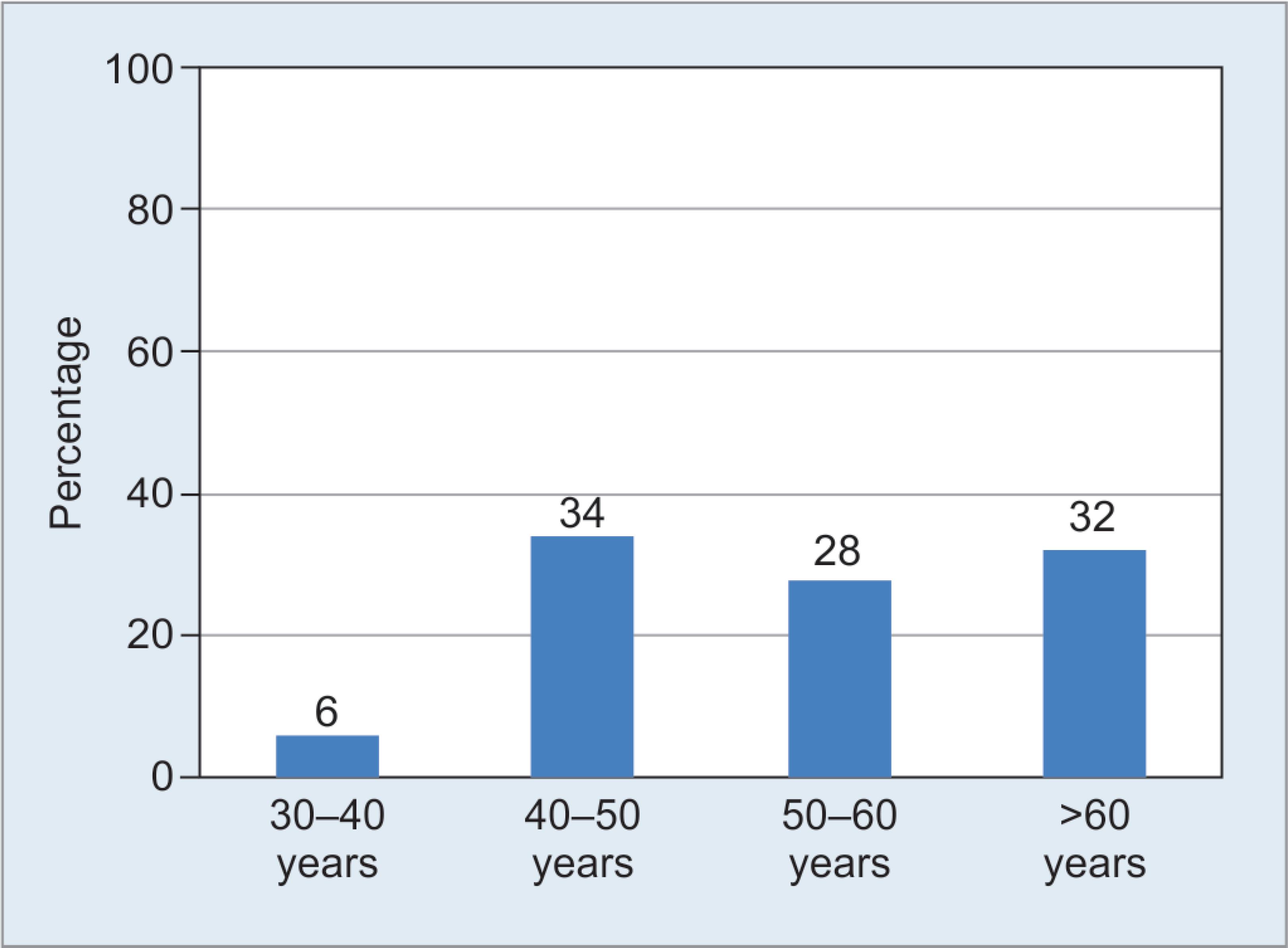 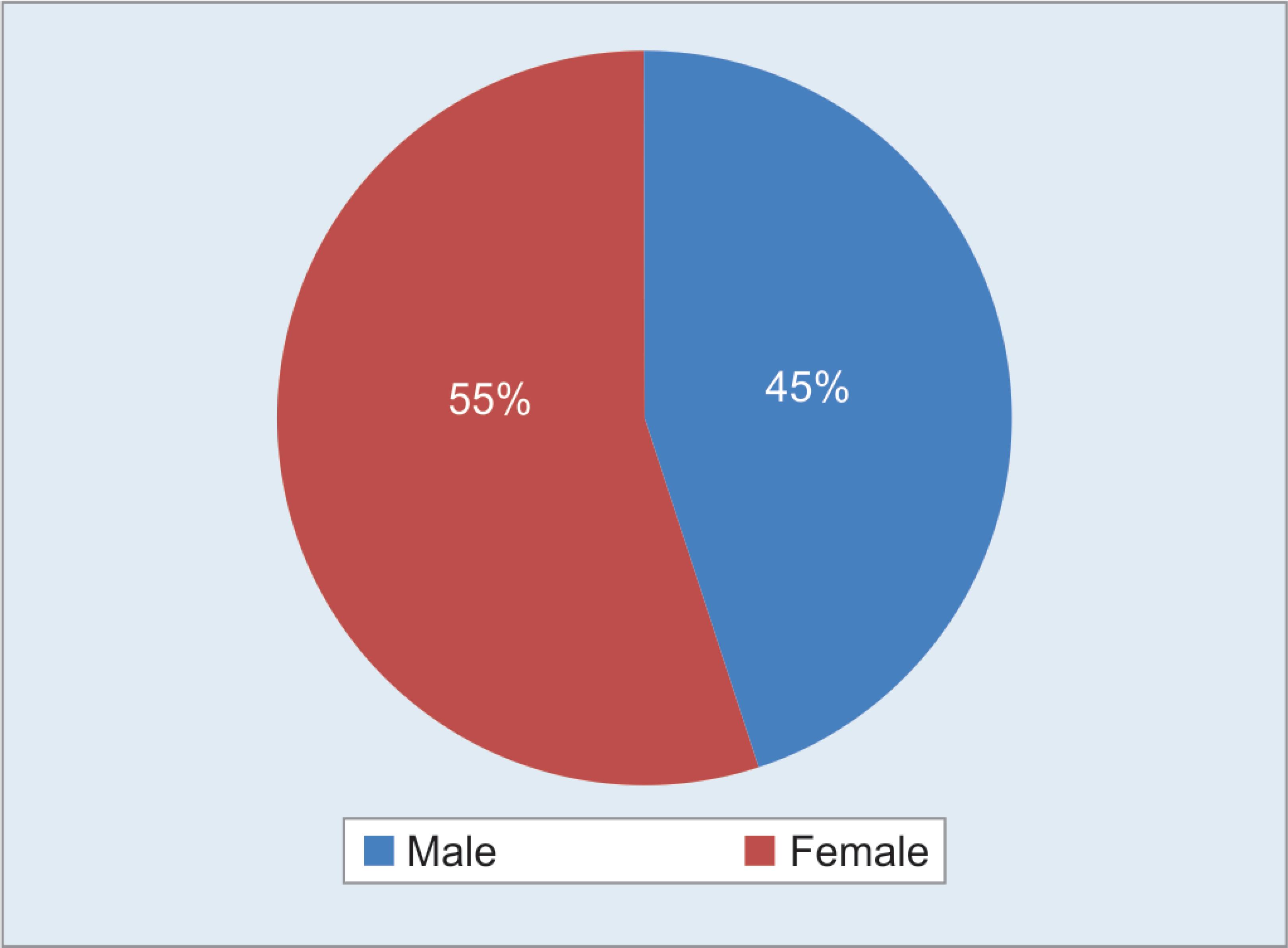 We analyzed the association between measures of BMI and LV diastolic function, measured by traditional Doppler analysis of mitral inflow and tissue Doppler imaging (TDI)-derived parameters in our study. Our findings indicate that: (1) the relationship between BMI and diastolic function parameters is continuous and independent of cardiovascular risk factors and (2) the obese status is already associated with an impairment of LV diastolic function.9

Overweight and obese subjects had also higher risk of a pseudonormalized diastolic pattern.

Furthermore, the use of E/A ratio, a widely used indicator of LV filling pressure, and an independent predictor of cardiac events including heart failure and myocardial infarction revealed higher LV filling pressures in obese and overweight patients than in normal weight subjects. Cardiovascular risk factors were significantly more prevalent among overweight and obese persons than among normal weight persons. It is established that hypertension, diabetes, and increased LV mass negatively affect LV diastolic function. However, BMI was still associated with LV diastolic function parameters after controlling for hypertension and diabetes. A subanalysis performed on subjects without hypertension and diabetes further confirmed these findings. Moreover, the increased LV mass that we observed in overweight/obese patients was not just the result of the greater prevalence of cardiovascular risk factors in these subgroups.10,11

In fact, there is ample evidence that the accumulation of adipose tissue may determine cardiovascular alterations in several metabolic and neurohormonal pathways, causing abnormalities in sodium handling, neuroendocrine activation, the renin–angiotensin–aldosterone system, and increasing myocardial oxidative stress. Changes in myocardial metabolism have been demonstrated in obese patients, with a shift toward free fatty acid utilization and subsequent cardiac lipotoxicity, resulting in cardiomyocyte apoptosis and reduced cardiac efficiency. In particular, myocardial fatty infiltration in obese patients may affect the cardiac structure and function, leading to the development of severe DD.12,13

A reduced E/A ratio has been shown to be independently associated with increased all-cause mortality as well as cardiovascular mortality. These structural abnormalities lead to increased wall stress, increased oxygen demand, ischemia, and the development of LVDD. It showed DD results in reduction in active LA emptying. It was showed that a decreased contribution of active LA emptying to ventricular filling during diastole was strongly predictor of adverse events. It showed that BMI associated with high A and low E. In obese, cardiac preload and afterload are increased leading to increased peripheral resistance. Increased proinflammatory cytokines originating from adipose tissue are suggestive to be important contributors.14,15

In a study conducted by Aljaroudi et al., 55.5% were females. In our study, 55 (55%) were females and 45 (45%) males. Results of the above studies were similar with present study with prevalence of DD was non-significantly higher among females.16

Our study was conducted in 100 patients were selected by simple random sampling method with normal left ventricular ejection fraction (LVEF), in which DD was assessed by 2D color Doppler echocardiography. Diastolic dysfunction was present in 81 (81%) patients. Patients who had BMI %3E;25, 21 out of 21 (100%) had DD. In this study, there was statistically significant correlation found between BMI and prevalence of LVDD with p value of 0.003. As this study did not include level of BMI, so we did not find association of level of BMI with worsening of DD.

There was a linear increase in prevalence of DD with increasing age. Tissue Doppler criteria were not considered for DD. Out of 100, 38 patients had LA size >40 mm.

Left ventricular diastolic dysfunction may be one of the pathophysiological links between overweight/obesity and the associated risk of having heart failure.19

Whereas in the past attention was paid essentially to obesity, our study demonstrates that subclinical signs of LV diastolic function impairment are present in overweight subjects too, and that these abnormalities are independent of associated risk factors. Therapeutic strategies aimed at promoting optimal body weight resulted in improvements in LV systolic and diastolic function, and might have a beneficial effect in preventing or delaying the future development of heart failure, a hypothesis that deserves further investigation.