Introduction: Mixed adenoneuroendocrine carcinoma (MANEC) is a rare tumor of the gastrointestinal tract which consists of a dual adenocarcinomatous and neuroendocrine differentiation, each component representing at least 30% of the tumor.

Conclusion: The case is worth reporting because of its rare presentation. Close attention should be paid to such patients, as MANEC can be a highly aggressive tumor, showing rapid progression and metastasis.

Mixed adenoneuroendocrine carcinoma (MANEC) introduced by the World Health Organization is a rare tumor of the gastrointestinal tract, which consists of a dual adenocarcinomatous and neuroendocrine differentiation, each component representing at least 30% of the tumor.1 Owing to its rarity, MANEC has been presented only as a case report, with only a few cases reported till date and with its treatment being unclear. This kind of neoplasm has a poor prognosis, as both components are malignant with high proliferative capacity and early vascular invasion leading to multiple organ metastases.2 Here, a rare case of gastric MANEC treated with gastrectomy,chemotherapy, and radiotherapy is presented.

A 60-year-old female presented with complaints of upper abdominal pain and difficulty in swallowing solid food, which later progressed to liquid diet. Endoscopy revealed linitis plastica. Contrast-enhanced computed tomography of abdomen revealed a diffuse stomach wall thickening in the region of fundus and body with enhancing nodular lesions likely of mitotic etiology along with upper abdominal lymphadenopathy. The patient underwent total gastrectomy. Grossly, there was a gray white growth at the antrum along with wall thickening measuring 3.5 × 2 cm in size, 5 cm away from the distal (pyloric end) (Fig. 1A). Multiple satellite nodules were also found, the largest measuring 1 cm in diameter, distributed throughout the stomach, reaching up to and involving a fundic surgical margin. Twenty five lymph nodes were recovered, and the histopathological report revealed tumor cells, forming a glandular pattern. These cells were round to oval, showing hyperchromatism and pleomorphism and a moderate amount of cytoplasm. Mitotic activity was increased (Fig. 1B). Amidst these, there was also a second population of small monomorphic cells present forming an insular pattern (Fig. 1C). Tumor cells with a glandular pattern were seen infiltrating into the muscle (Fig. 1D) as well as breaching the serosa. About 20 out of 25 lymph nodes showed secondary carcinomatous deposits. On immunohistochemistry, the carcinoid element comprised approximately 70% of the tumor with the adenocarcinoma element comprising approximately 30% as seen on the sections. The tumor proved to be adenocarcinoid of the stomach with synaptophysin/chromogranin positivity. The CK7/CK20/CEA and CDX2 were negative with ki67 proliferative index of 40%. The patient received chemotherapy with 25 cycles of radiotherapy but presented again with hepatic deposits within 6 months.

Neuroendocrine cell carcinoma is sometimes associated with adenocarcinoma, classified as “MANEC” in the 2010 World Health Organization guidelines.1 There are several different forms of stomach cancers, the most common being adenocarcinomas, gastric lymphomas, and gastrointestinal stromal tumor. Mixed adenoneuroendocrine carcinoma is a rare tumor of the gastrointestinal tract. The average age of patients is 59.3 ± 10.9, with the male-to-female ratio being 2.4:1 or greater,3,4 and the patient in this case report was also a 60-year-old female. The common features observed are nausea, vomiting, heartburn, indigestion, loss of appetite, abdominal fullness, weight loss, and fatigue. According to some authors, the clinical behavior depends on the grade of the neuroendocrine component, whereas others reveal that the characterstics of adenocarcinoma influence the outcome in well-differentiated neuroendocrine components. Our patient had ki67 proliferative index of 40%. Although the patient received chemotherapy with 25 cycles of radiotherapy, she reported back within 6 months with hepatic deposits. This indicates that MANEC is a highly aggressive tumor showing rapid progression, as it is known to frequently invade the lymphatic and vascular lumens and subsequently metastasize to the lymph nodes and liver, even during the early stages. As evident in the present case, 20 out of 25 lymph nodes showed secondary carcinomatous deposits. The disease-free period is usually short in these cases (Fig. 2). 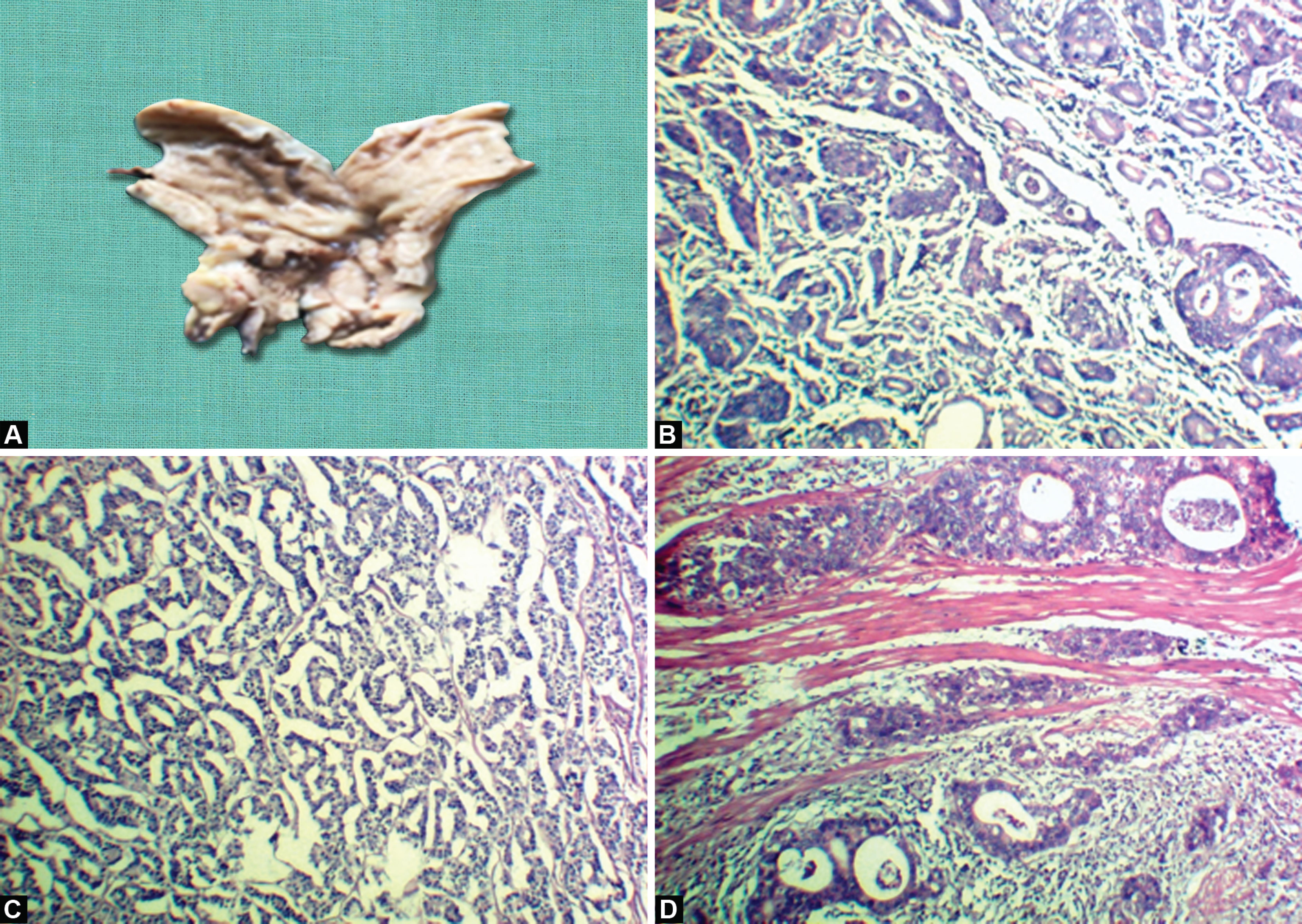 The assessment of MANEC is still incomplete, because the results of the studies conducted before 2010 did not reflect the exact definition. However, MANECs containing a poorly differentiated NEC component should be treated as NECs. Nevertheless, intense follow-up for possible recurrence is necessary, as the disease can lead to poor prognosis. In the recent studies carried out, chemotherapy has been reported to be the treatment of choice, which had improved the median survival to the range of 6–12 months. Although it has not been standardized, a combination of etoposide and cisplatin is used. Even though the role of radiation for MANEC is unclear, local radiations can be given to reduce the risk of local recurrence. After surgery with chemotherapy and radiotherapy to the tumor region, the patient may have a long-term disease-free survival.

The case of MANEC stomach with hepatic deposits presented with a rare presentation of dysphagia. Close attention should be paid to such patients as MANEC can be a highly aggressive tumor showing rapid progression. In the treatment of MANEC, it is necessary to keep the patient under constant observation to diagnose any further metastasis as early as possible, as the disease-free period is usually short. The prognosis depends on the early diagnosis and treatment, and hence all efforts should be made to diagnose this aggressive tumor at an early stage. 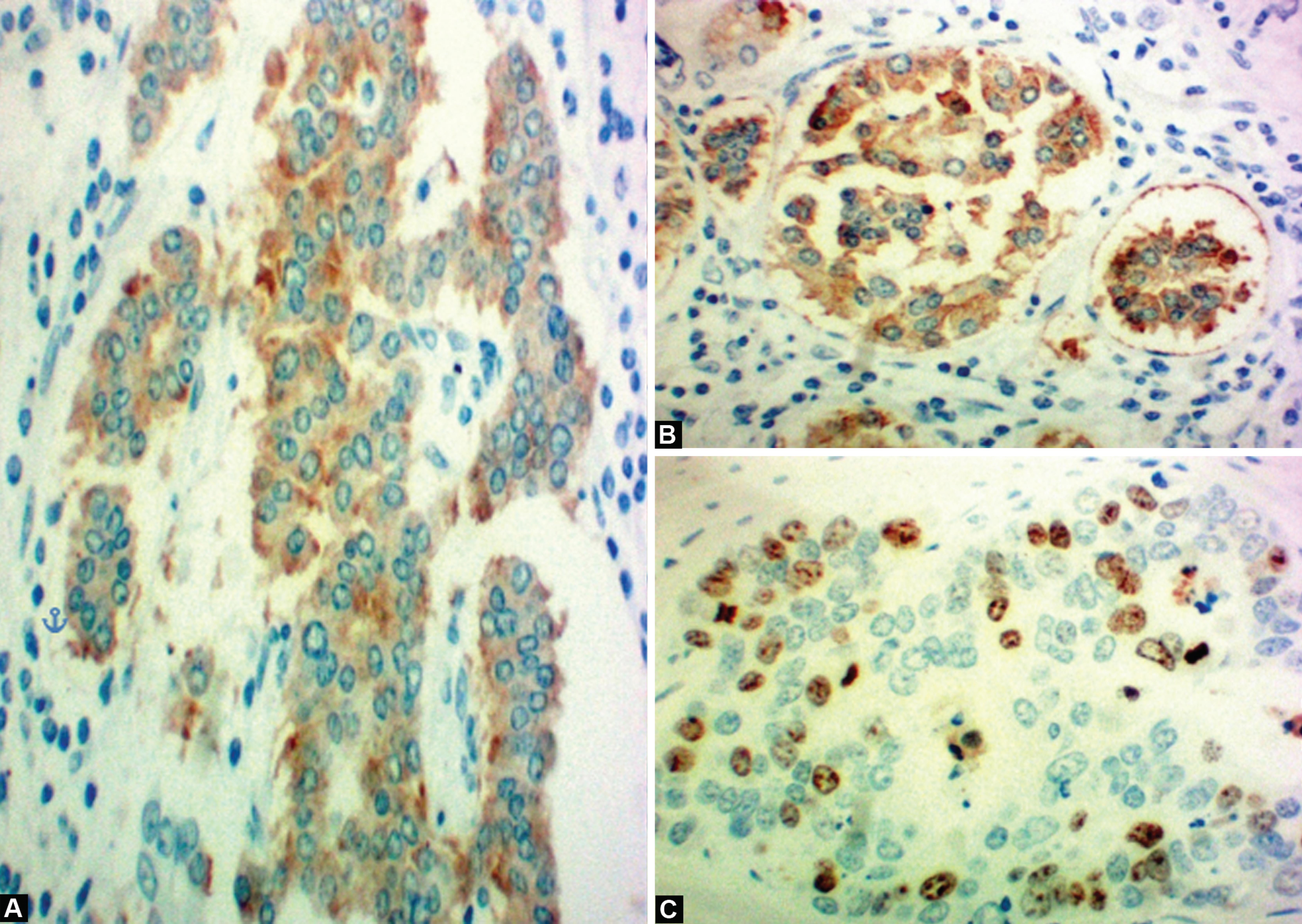