Evaluating the Efficacy of Radiological Investigations of Adenomyosis with Clinical Symptomatology

How to cite this article: Sidhu A, Pahwa S. Evaluating the Efficacy of Radiological Investigations of Adenomyosis with Clinical Symptomatology. AMEI's Curr Trends Diagn Treat 2020;4(2):65–68.

Introduction: Adenomyosis is a benign gynecological condition that predominantly affects women in the late reproductive age. It is a real challenge in healthcare with prevalence ranging from 5 to 70%. It is characterized by uterine enlargement caused by ectopic rests of the endometrium within the myometrium. It is mainly associated with abnormal menstrual bleeding and severe dysmenorrhea. But now it can be done by advanced imaging modalities like transvaginal ultrasound (USG) and magnetic resonance imaging (MRI).

Materials and methods: A prospective longitudinal study was conducted from November 1, 2018 to January 31, 2020 on subjects with complaints of abnormal uterine bleeding and or with dysmenorrhea in the department of obstetrics and gynecology (OBG) of a tertiary care hospital and medical institution. Various medical and surgical treatments were offered on merit depending on age group and clinical symptomatology. The subjects were followed up for a minimum period of six months thereafter.

Adenomyosis is a condition in which there is uterine enlargement caused by ectopic rests of the endometrium—both glands and stroma—located within the myometrium.1

Adenomyosis is a benign disease that predominantly affects women in the late reproductive age. The prevalence ranges from 5 to 70%. In a study done by Naftalin et al., in London, the incidence of adenomyosis in the infertile population was found out to be 20.9%.2 Amongst abnormal uterine bleeding (AUB) in the perimenopausal age group, 44.56% had a finding of adenomyosis on histopathology.3 Pelvic endometriosis co-exists in about 40% of cases.

Ultrasound is the primary modality for diagnosing adenomyosis. Ultrasound findings include heterogeneous myometrial echotexture, myometrial cysts. Asymmetry of anterior-posterior myometrium is seen along with a diffuse spread of vessels within the myometrium.

A study done by Exacoustos et al. found that a 2D-trans-vaginal ultrasound (TVUS) volume measurement (cm3), calculated by an ellipsoid formula was higher for women with adenomyosis than those with histologically confirmed adenomyosis.3

On a coronal view of 3D-TVUS, the junctional zone can be identified as a hypoechoic area around the endometrium and distortion or infiltration of the hypoechoic inner myometrium.

Imaging techniques, including 2D or 3D ultrasound and MRI, allow localization of the different types of adenomyosis (diffuse and focal). Therefore, an integrated non-invasive diagnostic approach is proposed to diagnose adenomyosis.6

To correlate the type and degree of adenomyosis scored through a new system based on the features of transvaginal sonography, to patients’ symptoms and fertility a multicenter, observational, prospective study was conducted in 2019 at the University of Rome “Tor Vergata” and University of Siena. Higher values of menstrual bleeding were found for severe diffuse adenomyosis, with the highest values being found in those with adenomyomas.7

The present study was planned to validate various diagnostic modalities at different ages targeting the symptomatology.

A longitudinal study was conducted on subjects visiting the outpatient department of OBG in tertiary care hospital and medical institution for 18 months beginning from November 1, 2018 to January 31, 2020.

Clearance from the Ethical Committee was taken before the start of the study.

The age of subjects range from 30 to 55 years with complaints of abnormal uterine bleeding with or without dysmenorrhea were recruited. In the case of menstrual abnormalities, a detailed record of menstrual rhythm was noted. The record of the previous three cycles was maintained.

Detailed history including personal and family history was taken. Any investigation and treatment already undertaken were recorded.

Radiological investigations including TVS ultrasound with color Doppler was done. MRI was requisitioned for confirmation of diagnosis.

Dysmenorrhea was assessed from history, observing pain, the need for analgesics, and VAS score.

Anemia was seen from pallor, other symptoms like lethargy and confirmed by lab testing (complete blood count).

PV (per-vaginal)/PR (per-rectal)/PS (per-speculum) examination was done in patients appropriate for age, marital status, and to know pelvic anatomy and pathology in view of PALM-COEIN classification for the inclusion of adenomyosis.

The patient was subjected to TVS-USG for knowing pelvic anatomy and pathology. MRI was done.

The data from the present study was systematically collected, compiled, and statistically analyzed to draw relevant conclusions. Data were analyzed by using the χ2 test, T-test, and ANOVA. The p-value was determined finally to evaluate the levels of significance. The p-value of >0.05 was considered non-significant and the p-value of 0.01–0.05 was considered significant. The results were then analyzed and compared to previous studies. SPSS-22 version of the software was used, released 2013, Armonk, NY: IBM Corp.

Patients were categorized according to age (Table 1).

Out of 31 patients, 90.32% presented with heavy menstrual bleeding, and 9.68% presented with pelvic pain. All patients had dysmenorrhea during menses as shown in Table 2. 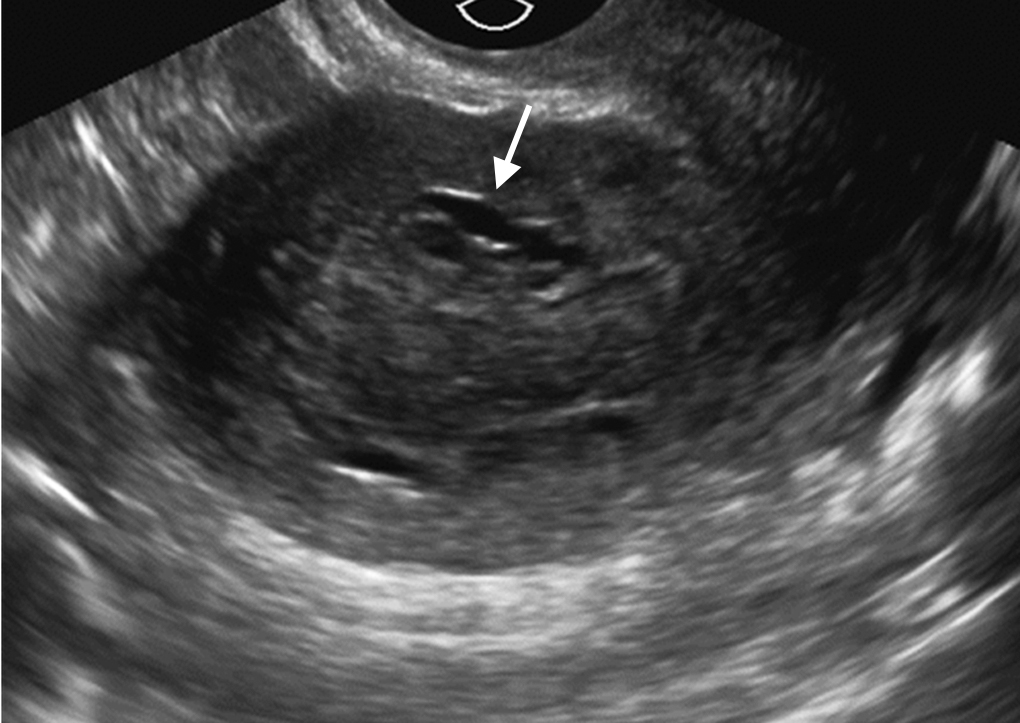 Fig. 1: Anechoic cysts and ectopic endometrium within the myometrium suggestive of adenomyosis

In 1972, Bird et al. defined adenomyosis as “Benign invasion of the endometrium into the myometrium, producing a diffusely enlarged uterus which microscopically exhibits ectopic, non-neoplastic, endometrial glands and stroma surrounded by heterotrophic and hyperplastic myometrium.”9

In 1977 adenomyosis was very aptly described by Owolabi and Strickler as “the addendum to textbook chapters on ectopic endometrium; it is the forgotten process and a neglected diagnosis”.10

Adenomyosis is a condition in which there is uterine enlargement caused by ectopic rests of the endometrium.1

In our study, the main aim was to evaluate the efficacy of imaging diagnostic tools following clinical suspicion of adenomyosis.

Adenomyosis mainly affects women in the late reproductive age. A study done in 2019 showed that the largest group was of perimenopausal age (41–50 years) contributing 46% of total cases.12

A detailed record of menstrual rhythm was noted. The record of the previous three cycles was maintained.

Detailed history including personal and family history was taken. Per-vaginal (PV) examination was done in each patient appropriate for age, marital status, and to know pelvic anatomy and pathology in view of PALM-COEIN classification for the inclusion of adenomyosis. Matalliotakis et al. found out that the adenomyotic uterus was globular but rarely exceeded 12 weeks gestation in size.15 In our study, on bimanual examination, 64.52% of subjects had uterus of about 12–14 weeks size and 35.48% had a normal-sized uterus.

A study done by Cirpan et al. showed anemia (HB level <12 g/dL) due to menometrorrhagia was observed in 26.3% of patients.16

Radiological investigations including TVS and TAS were done.

In our study, MRI was requisitioned for confirmation of diagnosis. Patients were counseled about the importance of MRI. A total of 32% of patients opted for an MRI in our study, which confirmed the findings of the ultrasound.