Aim and objective: To report a case of woolly hair in a 7-year-old girl due to its rarity.

Case description: A 7-year-old girl presented in Dermatology OPD at Sri Guru Ram Das Institute of Medical Sciences and Research with a complaint of short, curly, brittle hair since birth. A similar complaint was present in her 9-year-old sibling. There were no associated systemic features. Based on the clinical features, a diagnosis of woolly hair was made.

Conclusion: We are presenting this case due to its exclusive occurrence.

Clinical significance: Awareness and knowledge of varied associations of woolly hair will help in early diagnosis and alleviate any complications. Hence, a thorough history and examination is mandatory to rule out any associated features.

Woolly hair is an infrequent structural abnormality of scalp hair. It is the presence of more or less tightly coiled hair that may involve the entire scalp or can be localized. It can be associated with cutaneous and extracutaneous anomalies and can also occur as an isolated entity.1 It is a hair shaft disorder where the rate of hair growth is normal but a truncated anagen phase leads to short hair.2

We intend to report a case of woolly hair in a child.

A 7-year-old girl born Dermatology OPD at Sri Guru Ram Das Institute of Medical Sciences and Research of a nonconsanguineous marriage presented in dermatology OPD with a complaint of short, curly, brittle, unmanageable hair since birth. A similar complaint was present in her 9-year-old sibling. There was no such history in her parents or family. There was no history of physical or mental retardation. Examination revealed curled, hypopigmented, thin, short scalp hair (Fig. 1). The body hairs were also sparse. Eyes, nails, and teeth were normal. Systemic and routine blood investigations were within normal limits. Light microscopy of hair showed a slight variation in the thickness of the shaft and potassium hydroxide examination of hair was normal. Trichoscopy showed varied thickness of the hair shaft. Based on the above findings, a diagnosis of woolly hair was made. 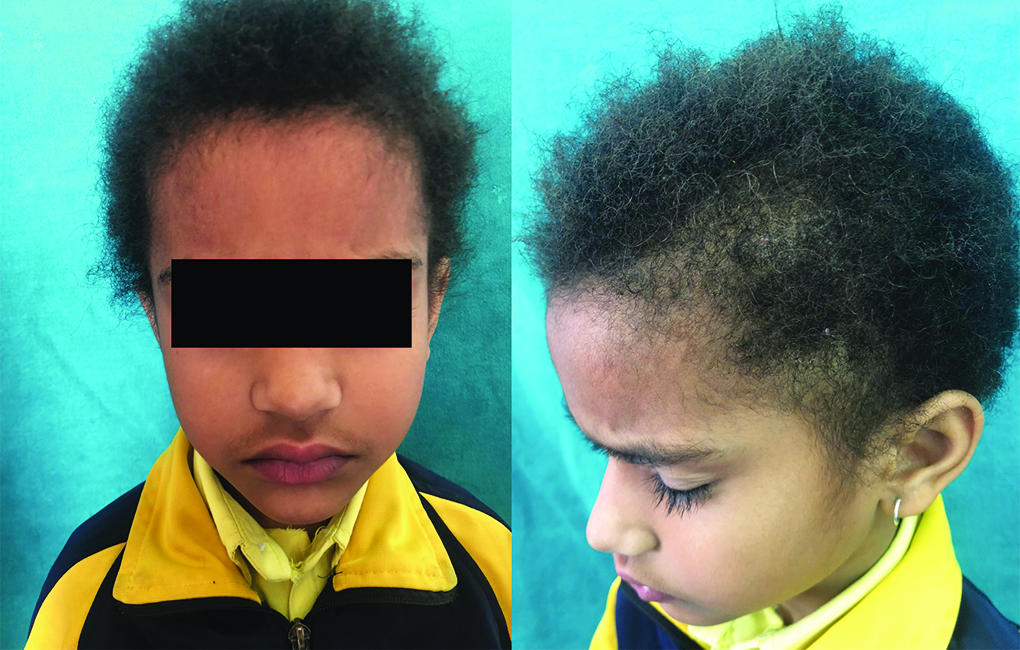 Woolly hair is a rare congenital structural anomaly in a non-Negroid origin involving the scalp hair. It is a hair shaft disorder without increased fragility. The term woolly hair refers to the altered texture resembling sheep wool.1 It was first observed in an European family by Gossage in 1907.3 Later, a classification by Hutchinson et al described four types: hereditary woolly hair which is autosomal dominant, familial woolly hair that is autosomal recessive, symmetrical circumscribed allotrichia, and woolly hair nevus.4 Extremely curly hair in these patients are different from the curly hair in black people as curls of woolly hair merge but in black people they lie seperately.5 The hair shaft demonstrates axial rotation, elliptical cross section, and kink formation. The average diameter of hair documented is up to a maximum of 0.5 cm. This can be explained by the truncated anagen phase in these patients.

Woolly hair can be associated with systemic findings known as woolly hair syndrome. These include teeth defects, keratosis pilaris, deafness, nail abnormalities, and bullous impetigo.2 Another variant, nonsyndromic woolly hair has also been described which has no association with systemic features as is observed in our patient. Similarly a localized variant, woolly hair nevus can be found with or without associated conditions.6 Two significant correlations of woolly hair are Naxos disease and Carvajal disease. Naxos disease is an autosomal recessive condition comprising of cardiomyopathy, woolly hair, and palmoplantar keratoderma. It occurs due to mutation in plakoglobin gene. Carvajal disease has similar features but occurs due to mutation in desmoplakin gene.7

We are presenting this case due to its exclusive occurrence as only a handful of cases have been reported till date around the world. Our patient has a positive family history and has no systemic associations. There is no effective treatment. Patient as well as family counselling was done regarding the genetic nature of the condition. Clinical diagnosis is the mainstay but trichoscopy can be of added value. Detailed history and examination have utmost importance to rule out associated features.

Awareness and knowledge of varied associations of woolly hair will help in early diagnosis and alleviate any complications. Hence, a thorough history and examination is mandatory to rule out any associated features.