Clinical significance: These findings can reliably help in diagnosing TLPD, and it is essential for the radiologist to be aware of these so as not to miss the diagnosis.

Lateral patellar dislocation (LPD) is among the most common knee injuries in young active adolescents.1,2 It has been reported in many studies that with increasing age, the risk of LPD decreases and it becomes negligible after the age of 40 years.3,4

In most cases, there is a transient episode of LPD with reduction of dislocated patella on subsequent knee extension.5 Therefore, the term transient lateral patellar dislocation (TLPD) is more frequently used. By the time magnetic resonance imaging (MRI) is performed, the patella has usually reduced back to its original position and it is only the secondary signs that aid in the diagnosis.

Clinically, patients present with pain involving medial aspect of anterior compartment of knee, which can be explained by bony or cartilaginous injury to the medial patella and lateral femoral condyle and injuries involving medial retinaculum/medial patellofemoral ligament (MR/MPFL).

The study is intended to illustrate the various patterns of injury in patient with TLPD on MRI.

The patellofemoral joint is formed by articulation of femoral trochlea and patella. TLPD is common due to the diverging pull of the patellar tendons and quadriceps (leading to the formation of Q angle, measuring approximately 15°), which is further worsened by the normal valgus configuration of the resting knee.6–9 Patellofemoral joint is stabilized by active stabilizers (extensor muscles) and passive stabilizers (ligaments and bones). MR/MPFL is the most important ligamentous stabilizer. Vastus medialis obliquus counteracts the action of the vastus lateralis and is the most vital active stabilizer. The femoral sulcus should be of adequate depth, and the lateral trochlea must be of appropriate height to enable safe tracking throughout the range of patellofemoral flexion.10,11

In trochlear dysplasia, the trochlear groove is of suboptimal depth, so it is unable to engage patella especially during early flexion along the knee joint.10 Similarly in patella alta, there is reduction in contact between patella and femoral trochlea during early phase of knee flexion, which leads to patellar dislocation.8,10,12,13

The characteristic way in which bruising occurs in the lateral femoral condyle and medial patella as mentioned above could easily be understood if we consider the mechanism by which patellar dislocation occurs. The injury mostly occurs due to twisting of knee particularly when knee is in mild flexion (less than 30°). During the above-mentioned case, scenario patella undergoes a transient lateral displacement. During this dislocation phase, articular surfaces of either lateral femoral condyle or patella can get damaged by the shearing forces. Subsequently with reduction and extension at the knee joint, the patella relocates, but during that process, there occurs impaction of medial aspect of patella with the anterior aspect of lateral femoral condyle, which leads to the characteristic marrow edema pattern (Fig. 1).14,15 This study was conducted to determine the prevalence of various injury patterns in patients with TLPD on MRI. 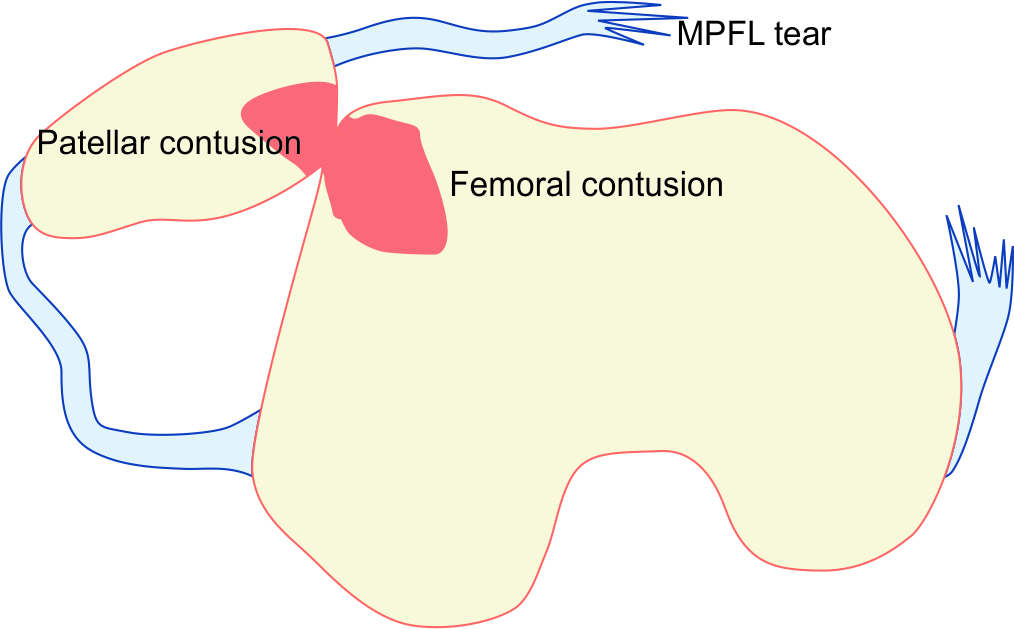 Fig. 1: Schematic image to depict the mechanism and injury pattern of TLPD

This study was conducted after obtaining institutional ethical clearance. Thirty patients below 45 years of age with clinical history suggestive of patellar dislocation were enrolled in this study. Patients with prior history of infective/degenerative arthritis and patients in whom MRI was contraindicated were excluded from this study. After taking the informed, written consent of each patient, MRI was performed on Philips Achieva dStream 1.5 Tesla MRI using Sense Body Coil. This study was ethically conducted in accordance with the Declaration of Helsinki.

Various MRI findings to be evaluated in this study are as follows:

The MR/MPFL was assessed on axial sections and divided into three parts according to Palmer et al:16 at the level of its patellar insertion, at its mid-substance, and at its femoral origin (Fig. 2). The MR/MPFL was screened for partial or complete discontinuity with surrounding edema. Bone contusions involving lateral femoral condyle and medial aspect of patella were seen as areas of hypointensity in bone marrow on T1-weighted sequences and hyperintensity on PDFS sequences. Osteochondral injuries were identified as irregularity of the osteochondral surface of inferomedial patella.17 On sagittal images, joint effusion was considered significant if along the suprapatellar recess anteroposterior fluid depth was more than 4mm in the midline and 10 mm lateral to the midline.18 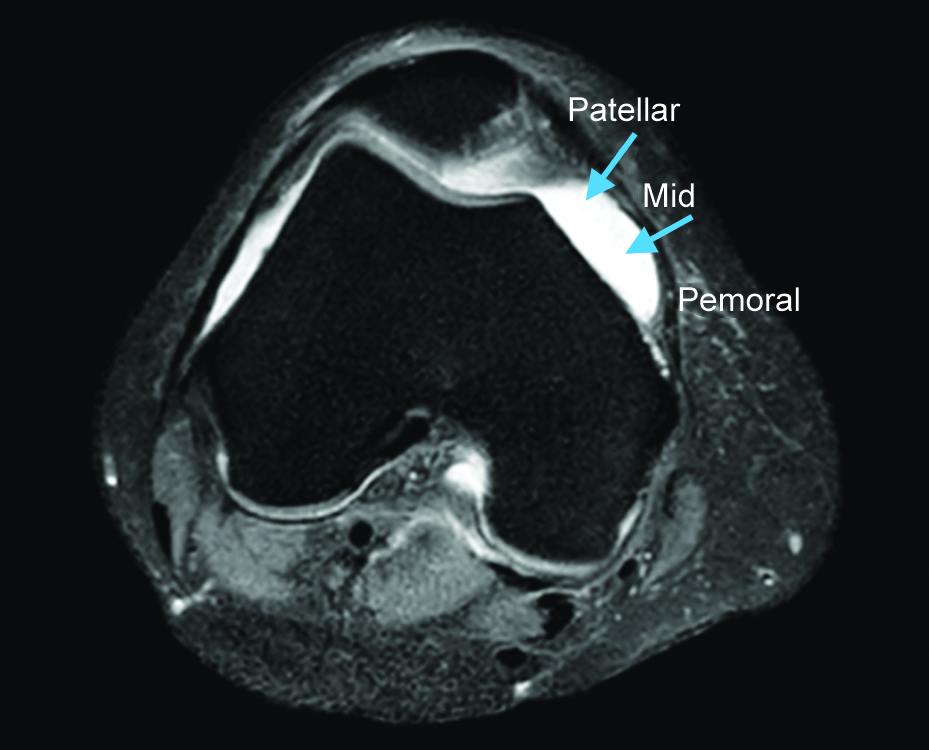 Patellar tilt was estimated on axial MRI by comparing a line that crosses the anterior tips of the medial and lateral femoral condyles with a line drawn through the lateral patellar facet at the level of the midpatellar cartilage. The angle formed by the two lines is considered normal (absent for patellar tilt) if it opens laterally or abnormal (patellar tilt present) if the lines are parallel or the angle between them opens medially.19 Patellar subluxation is the lateralization of patellar apex with respect to the plane of trochlear apex. It was assessed on axial sections by deciding whether the patellar apex lay in the same parasagittal plane as the apex of the femoral trochlear groove. Medial meniscus was assessed for any tear. MCL was also assessed for any injury.

Thirty patients (out of which 17 were females and 13 were males) with mean age of 21 years and age range of 10–45 years with history of LPD were assessed. The majority of patients showed characteristic injury patterns (Table 1). 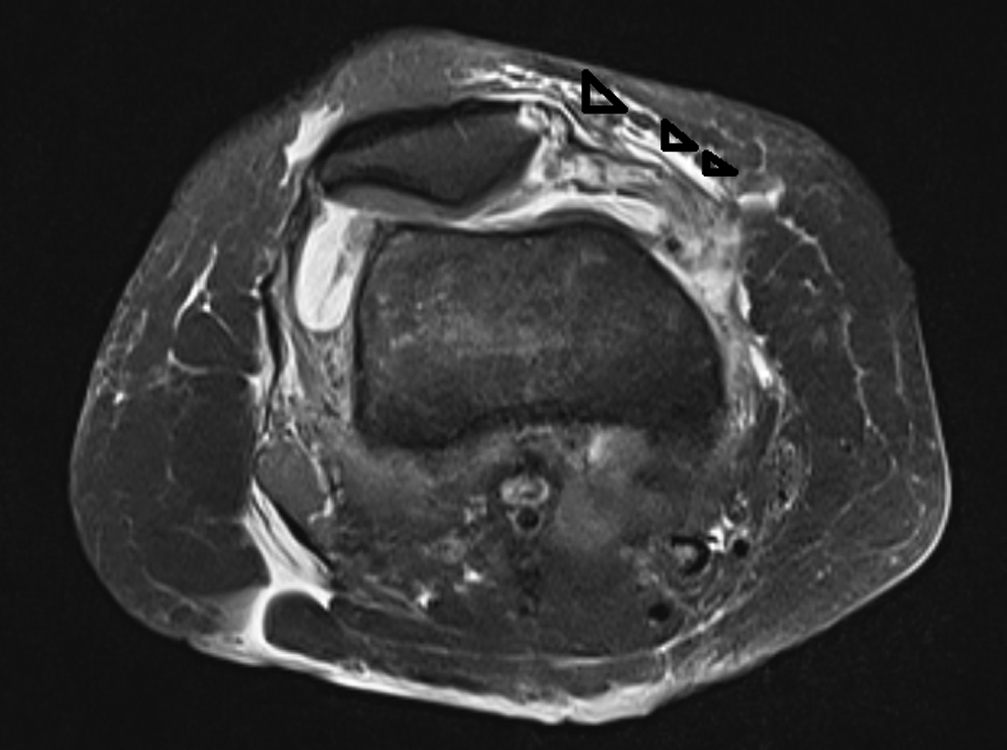 Fig. 3: Axial FSPD image: There is diffuse thickening and hyperintensity in MPFL consistent with tear of the ligament (black arrowheads) 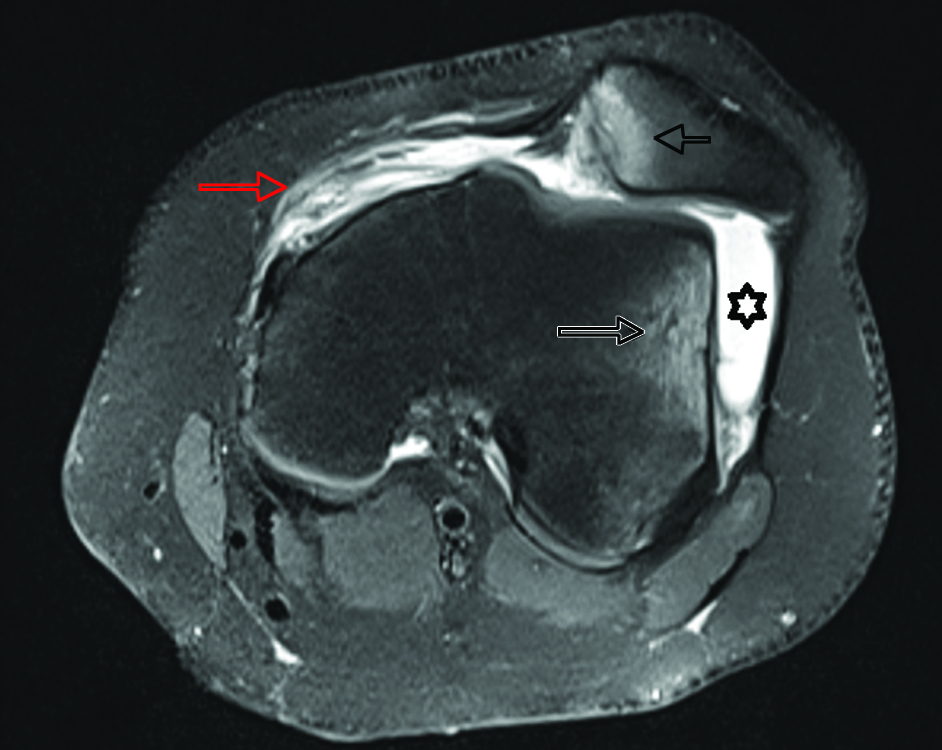 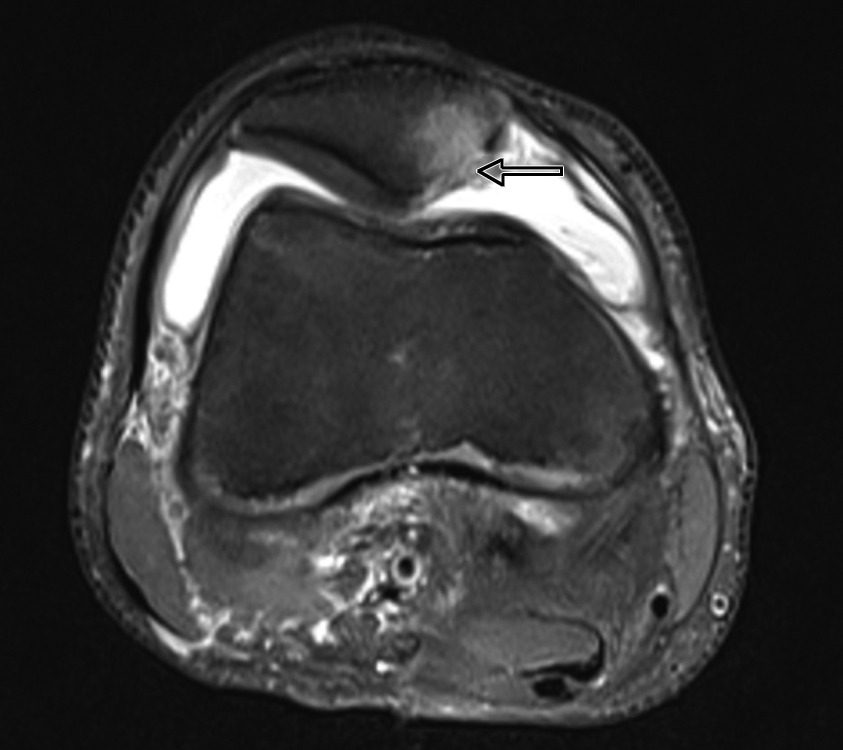 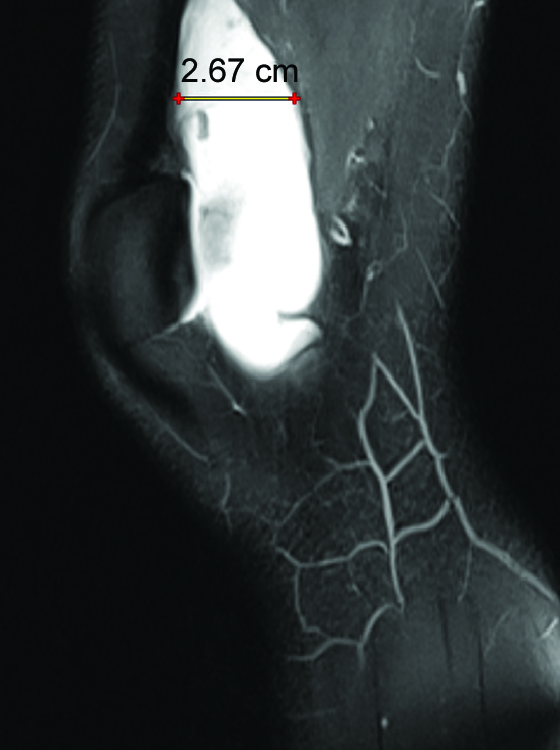 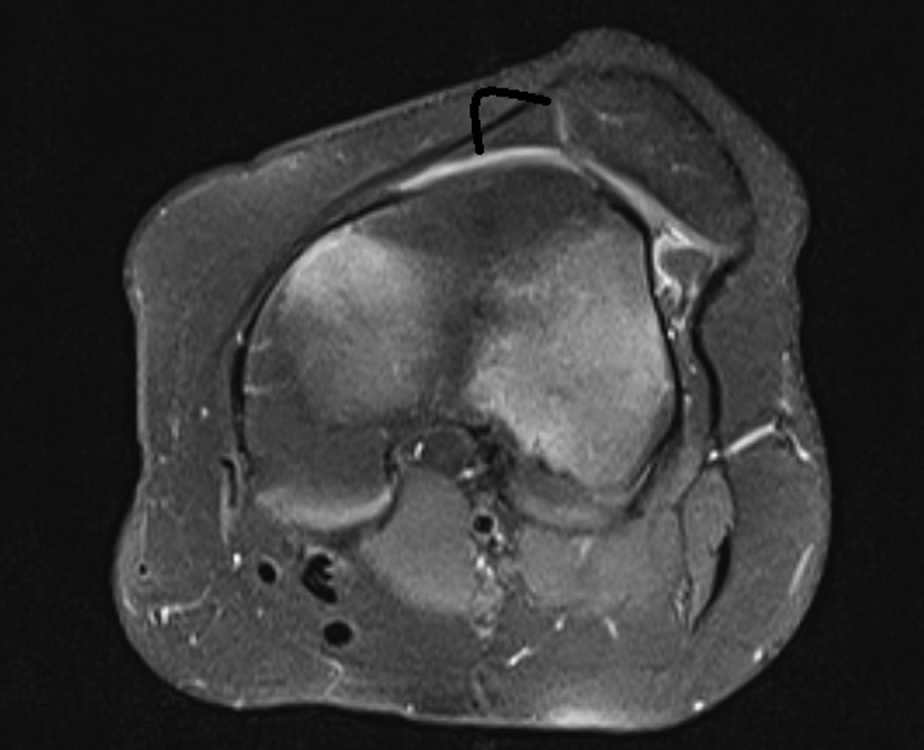 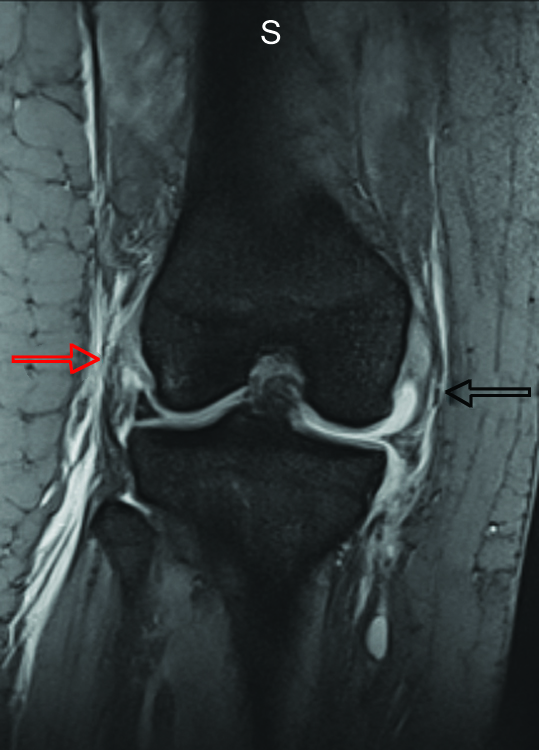 TLPD is common in young adults involved in sports and dance-related activities. Previously, plain radiograph was used to diagnose it, but many studies have concluded that radiographs have limited value to diagnose TLPD with diagnostic strength of as low as 32% in one of the studies.20 Therefore, MRI is the modality of choice to diagnose TLPD. Our study assessed the role of MRI in the detection of associated MRI findings seen in the case of patellar instability, which can indirectly suggest the diagnosis. Various associated MRI findings evaluated in this study were MR/MPFL injury, bone marrow edema/contusions involving lateral femoral condyle, bone marrow edema/contusions/osteochondral injuries involving medial aspect of patella, significant effusion, patellar tilt, patellar subluxation, MCL injury, and medial meniscal tear.

MR/MPFL is the main medial ligamentous stabilizer, and it is the most common injury associated with TLPD. Axial images are best for the evaluation of MR/MPFL.21 Of 30 patients, 25 (83.3%) showed MR/MPFL tear in general. This is in concordance with study by Lance et al.22 and Spritzer et al.23 where they have shown that 80 to 90% of patellar dislocation shows concomitant MPFL tear.

Of 30 cases, 20 (66.6%) showed significant effusion. We identified fewer cases with effusion, in comparison with previous studies by Lance et al.,22 Spritzer et al.,23 Kirsch et al.,25 and Virolainen et al.26 in which effusion was seen in 95 to 100% of cases. This could be possibly due to strict criteria to diagnose clinically significant effusion used in our study. In our study on sagittal images, effusion was considered significant if along the suprapatellar recess anteroposterior fluid depth was more than 4 and 10 mm in the midline and lateral to midline, respectively. This could be further supported by nearly similar findings (55%) by Elias et al.7 in which similar criteria for effusion were used.

Of 30 patients, 3 (10%) showed MCL injury. Elias et al. in their study also showed similar results with MCL injury seen in 11% of their cases.7

Since LPD is a transient phenomenon, so we have to rely on secondary findings for its diagnosis. In this study, we have discussed the incidence of these characteristic injury patterns including contusions of the lateral femoral condyle, contusion/osteochondral injury of medial patella, significant effusion, patella subluxation, patellar tilt, MR/MPFL tear, which are the most common magnetic resonance injury patterns in TLPD. These findings are therefore essential to be recognized on routine MRI studies since prior history is not always present.

We hereby acknowledge all patients for acting as valuable subjects for this study.

These findings can reliably help in diagnosing TLPD, and it is essential for the radiologist to be aware of these so as not to miss the diagnosis.