An Evaluation of Osteoporosis as a Potential Risk Factor in Postmenopausal Women: A Clinicoradiographical Study

Background: Periodontitis is an inflammatory disease that leads to alveolar bone loss. Severe osteoporosis could be suspected as being an aggravating factor in the case of periodontal destruction. Osteoporosis is particularly high in postmenopausal women. Panoramic radiographs are usually advised to detect periodontal diseases and can be used to predict low bone mineral density.

Aims and Objectives: To identify the role of osteoporosis in periodontal disease progression using panoramic radiographs.

Conclusion: It can be concluded that bone density is reduced in postmenopausal women putting them at a greater risk of periodontitis and osteoporosis.

Chronic periodontitis is one of the most common inflammatory diseases caused by specific microorganisms, leading to progressive destruction of the connective tissue and alveolar bone.1 One of the aggravating factors in the case of periodontal destruction could be severe osteoporosis.

The term osteoporosis is derived from classical Greek words “osteon” meaning bone, “pores” meaning a small passage or pore, and osis meaning condition. According to the definition of the World Health Organization (WHO) formulated in 1994, osteoporosis is a systemic disease characterized by low bone mineral density (BMD), deterioration of bone structure, and increased bone fragility.2 Clinically, osteoporosis just like periodontal disease is a silent disease, because weak bones are not painful until a fracture occurs. Many patients without symptoms incorrectly assume that they do not have osteoporosis. Contrarily, patients with joint pain and a lack of fracture will incorrectly assume that they have osteoporosis.3 In India, one out of eight men and one out of three women suffer from osteoporosis, making India one of the largest affected countries in the world.2

In humans, the bone mass decreases with increasing age. Human bones decrease in density and increase in porosity beginning at approximately the third decade of life. This decline in bone mass is accelerated in women after menopause,4 and the rate of bone loss has been reported to vary from 0.5 to 1% per year.5 Thus menopause puts women at a greater risk of osteoporosis. Postmenopausal osteoporosis is closely associated with estrogen deficiency that results in increased resorption of bone compared to bone formation.6 Ayranci et al.7 stated that the age of menopause is between 45 years and 55 years all over the world. Ahuja et al.8 in his study identified 46.2 ± 4.9 years as the age of natural menopause in India.

The periodontal manifestations in menopause include alveolar bone resorption, clinical attachment loss, and tooth loss. The mechanisms by which systemic bone loss may lead to more severe periodontal destruction are decreased local BMD caused by systemic bone loss, altered local tissue response to periodontal infections, genetic factors, and changed lifestyle patterns, like smoking and alcohol consumption.6 These may put an individual at risk of both osteoporosis and periodontal disease.

Digital panoramic radiographs have been extensively used in screening and treatment planning for patients affected with periodontal diseases and have been shown to play a critical role in the identification and evaluation of osteoporotic patients or those with low BMD.9 To assess and quantify the quality of mandibular bone mass and to observe signs of resorption on panoramic radiographs, a number of mandibular cortical indices, including the mandibular cortical index (MCI), mental index (MI), and panoramic mandibular index (PMI) have been developed.

Thus, the aim of the study was to identify the risk of osteoporosis in pre- and postmenopausal periodontally healthy and chronic periodontitis women by digital panoramic radiographs.

The study population consisted of 80 female patients visiting the Department of Periodontology and Implantology, Sri Guru Ram Das Institute of Dental Sciences and Research, Amritsar, who had received a dental panoramic radiograph (DPR) as a part of their dental treatment. The research protocol was initially submitted to the institutional ethical committee and review board, and the ethical clearance was obtained and was in agreement with principles embodied in the Helsinki declaration of 1975, as revised in 2013. All the patients were informed about the study and informed consent was signed by each patient. A detailed medical history and menopausal history (if present) was recorded for each patient. The presence of periodontitis was assessed both clinically and radiographically on their panoramic radiographs.

The inclusion criteria were as follows:

The exclusion criteria were as follows:

The patients were divided into four groups.

All the clinical parameters and the radiographic index evaluation were recorded by a single examiner.

Comparisons between groups were applied using the unpaired t-test. Results were represented as mean ± standard deviation and p <0.05 was considered significant. 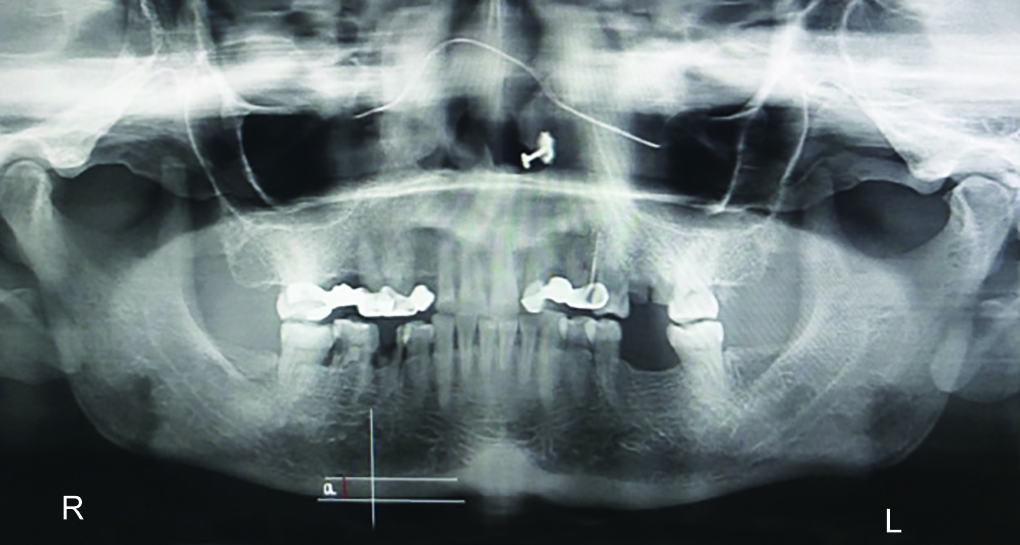 Fig. 1: Measurement of the mental index. a: Cortical thickness of mandible on a line perpendicular to the bottom of mandible at the center of mental foramen 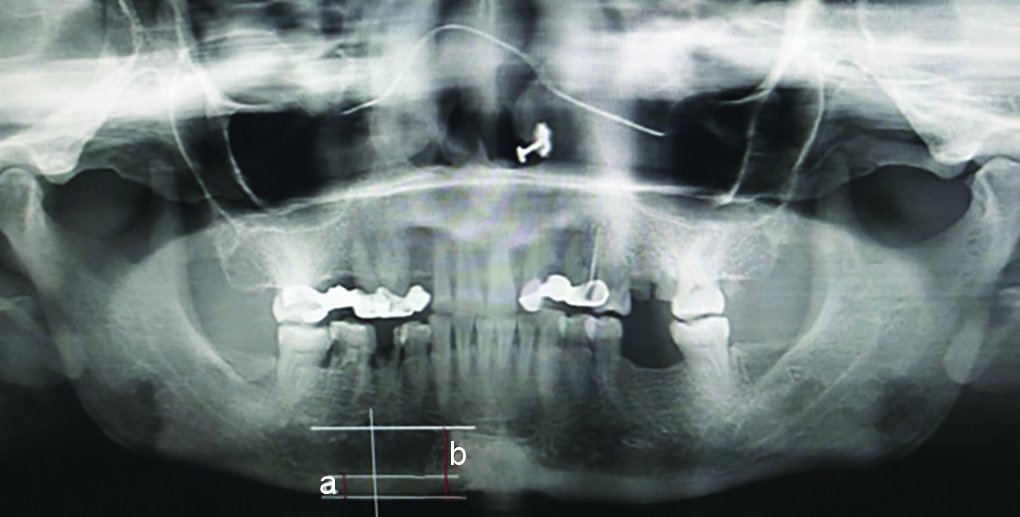 Fig. 2: Measurement of panoramic mandibular index (a/b). a: Cortical thickness of mandible on a line perpendicular to the bottom of mandible at the center of mental foramen; b: Distance between inferior aspect of mandibular cortex and mandibular bottom 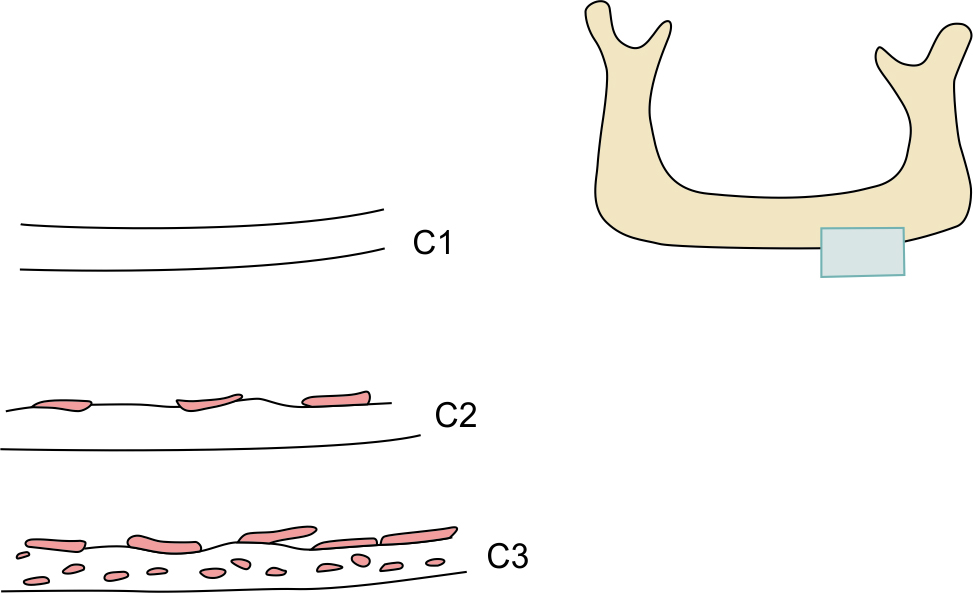 Menopause is documented as a complete cessation of menstruation for a period of 1 year. Perimenopause duration is variable, and it is defined as the time of irregular periods until menopause.8 Differences observed during the menopausal transition are due to varied genetics, differing lifestyles and cultures, and many other factors. As stated by Kolte et al.,1 this transition not only disrupts the menstrual periods but also affects other glands influencing different metabolic processes in the body, thus increasing the risk of various pathologies, including osteoporosis. According to Carranza,11 the beginning of menopause in women is accompanied by a number of changes, such as reduced salivation, the thinning of the oral mucous membrane, gingival recession, increased prevalence of periodontitis, and alveolar process resorption.1 With the onset of menopause in women, there is an accelerated rate of cortical bone loss of two to three percent per year for about 8 to 10 years. The periodontal manifestations in menopause include alveolar bone resorption, clinical attachment loss, and tooth loss.6 With this background, the present study incorporated study groups with and without chronic periodontitis belonging to pre- and postmenopausal status, thus examining the severity of alveolar bone destruction in these groups.

Due to feasibility and low exposure time, a large number of digital DPRs have been used for the examination of dental and periodontal diseases. The most commonly studied measures of mandibular morphology on DPRs in relation to osteoporosis include thickness and integrity of inferior border (endosteal and intracortical resorption, respectively) and some radiomorphometric indices, which can be utilized as tools in the detection of low BMD.6

The clinical parameters indicated substantial differences between the healthy controls and periodontitis patients in both pre- and postmenopausal groups. The differences between PPD and CAL in pre- and postmenopausal periodontitis patients were found to be statistically highly significant (p<0.0001), indicating greater severity of disease in postmenopausal patients. These findings are in accordance with the findings of Von Wowern.12 These findings were also corroborated with a higher score of PI and GI in these patients. MI and PMI values in digital panoramic radiographs were reduced in patients affected with periodontitis. These values were further reduced in the postmenopausal periodontitis group when compared with premenopausal periodontitis, thus indicating an increase in the severity of the alveolar bone loss. The differences in the MI measurements were highly significant (p = 0.0007), whereas those for PMI did not reach the levels of statistical significance. The results are in agreement with those obtained by Halling13 and are suggestive of a decrease in the cortical bone thickness in the gonial region, which might be associated with osteoporosis. However, these results also indicate a reduced influence of PMI in predicting the risk of osteoporosis or alveolar bone resorption as have been stated by Alonso et al.14

This study showed that the thickness and shape of mandibular cortex with C1 pattern was 25, 27, 21, and 23% in group I, group II, group III, and group IV patients, respectively. The patients demonstrating C1 pattern were more in premenopausal group as compared to postmenopausal patients. Furthermore, there was a substantial difference and reduction between the percentage of C1 pattern in pre- and postmenopausal periodontitis patients, indicating a more severe erosion of the mandibular cortex in the postmenopausal patients. These findings are in accordance with the findings of Peycheva et al.15 and Alapati et al.16

MCI is a qualitative index of cortical morphology. Mudda et al.4 suggested that for the diagnosis of osteoporosis, MCI classification based on panoramic radiographs may be a useful index. The results of our study demonstrated the increased level of significance of MCI in the identification of risk groups. This finding is in agreement with the study performed by Dagistan and Bilge who also found an association between MCI and osteoporosis. The greater percentage of C2 and C3 patterns of the mandibular cortex observed in postmenopausal healthy controls and periodontitis patients is a pointer toward an unknown influence in the resorption of alveolar bone, which most likely is due to the systemic impact. This is more of a concern considering the fact that a longitudinal study conducted by Geurs et al.17 showed a positive association between rate of progression of alveolar bone resorption and low systemic BMD in postmenopausal women.

In conclusion, our study demonstrated that bone density is reduced in postmenopausal women putting them at a greater risk of periodontitis and osteoporosis. The routine periodontal screening will go a long way to detect early bone changes, disease status, and treatment modalities, so in postmenopausal women referral from the medical side to the periodontist for the status of the alveolar bone is a must.