Intravenous Clonidine with Lignocaine Nebulization to Attenuate the Hemodynamic Response to Laryngoscopy and Tracheal Intubation: A Comparative Study

Introduction: The present study was conducted to compare the efficacy of intravenous (i.v.) clonidine with that of lignocaine nebulization for attenuation of pressor response to laryngoscopy and tracheal intubation.

Materials and methods: Fifty patients of either sex aged between 18 years and 60 years covered under American Society of Anesthesiologists health status classes I and II, undergoing elective surgery under general anesthesia requiring endotracheal intubation, were considered. Patients were randomly divided into two groups. Group A received i.v. clonidine 1 μg per kg and nebulization with 3 mg per kg of 4% lignocaine, and group B received i.v. normal saline and nebulization with 3 mg per kg of 4% lignocaine before intubation. Hemodynamic parameters were noted at baseline, after giving study drug, every minute after intubation for 10 minutes and then every 10 minutes thereafter till the end of the surgery.

Conclusion: In our study, i.v. clonidine in a dose of 1 µg per kg administered 15 minutes before laryngoscopy, and intubation was far superior to nebulized lignocaine alone in attenuation of the hemodynamic response.

When general anesthesia is administrated, the most critical events occur during laryngoscopy and endotracheal intubation. Hypertension occurs due to marked provocation of sympathoadrenal system causing rise in plasma catecholamine as tachycardia and hypertension. The circulatory responses have been reported immediately following laryngoscopy and intubation with a mean increase in systolic arterial pressure of 40 mm Hg even in normotensive individuals.1 It starts within 5 seconds, reaches a peak in 1–2 minutes, and returns to baseline within 5 minutes.2

The sympathoadrenal activity leads to an increase in plasma catecholamine levels, which may result in ailments, like hypertension, tachycardia, and arrhythmias.3 The response is usually transient and unpredictable. Only healthy individuals can very well sustain this response, but hazardous in patients with comorbidities, like hypertension, myocardial insufficiency, and cerebrovascular diseases.4 The laryngoscopic reaction in these patients may render them to development of myocardial infarction, acute left ventricular failure (LVF), dysrhythmias, and intracranial bleed.

Various methods have been devised to blunt this pressor response elicited by upper-airway irritation, but no single agent has been yet able to be considered as most appropriate for this purpose. Some authors tried the use of intravenous (i.v.) lignocaine, laryngotracheal instillation of lignocaine, opioids, deep inhalational anesthesia, β-blockers, and magnesium sulfate before initiating laryngoscopy.5–9

It was hypothesized that topical anesthesia of airway alone or in combination with other techniques may be useful in suppressing the hemodynamic response to laryngoscopy and intubation. Administration of lignocaine via nebulizer produces low serum levels and reduces adverse effects compared to gel or spray formulations.

Our objective was to find a simple and safe method for diminishing the stress response, particularly in compromised patients with decreased myocardial reserve. Intravenous clonidine, an α-2 adrenergic agonist, appears to obtund the stress response to the surgical stimuli.10 Hence, this study was designed to compare the efficacies of i.v. clonidine and lignocaine nebulization in attenuating the hemodynamic response to laryngoscopy and tracheal intubation.

The present study was conducted in a prospective, randomized, interventional, and double-blind comparative manner in the Department of Anaesthesia, a Tertiary Care Medical Institute, Sri Amritsar, after taking written informed consent of patient and approval by Hospital Ethical Committee. A total of 50 American Society of Anesthesiologists (ASA) classes I–II adult patients in the age group of 18–60 years belonging to either sex admitted for elective surgery under general anesthesia were studied.

Group size of the study has been determined as 44 by considering α error of 0.05 and power of study of 80%. Considering 10% dropout rate, the sample size has been increased to 50 with 25 patients in each group.

Computer-generated random number was obtained and sealed in envelope. The slip was taken out by the senior anesthesiologist not involved in the study, and drug was prepared according to the coded slip.

The patient and the observer were blind to the drug solution injected, and the drug solution was in the form of 10-mL solution each. Group A received i.v. clonidine 1 µg per kg (diluted to 10 cc with normal saline) and nebulization with 3 mg per kg (0.075 mL per kg) of 4% lignocaine and group B received i.v. normal saline 10 cc and nebulization with 3 mg per kg (0.075 mL/kg) of 4% lignocaine. The study drugs were administered 15 minutes prior to intubation.

Patients with the following conditions were excluded from the study: not willing to participate, anticipated and unanticipated difficult airway, hypertension, ischemic heart disease, known allergy to study drugs, patients requiring >30 seconds or more than one attempt for laryngoscopy, occurrence of laryngospasm or bronchospasm, and patients receiving antihypertensives, sympathomimetics, antidepressants, vagomimetics, etc.

A thorough preoperative assessment of the patient was done by an anesthesiologist. All patients were investigated for complete blood count, renal function test, electrocardiogram (ECG), and chest X-ray.

All patients in the study received a standard general anesthesia technique followed by endotracheal intubation. Patients received tab. alprazolam 0.5 mg at night and at 6 a.m. on the day of surgery. Intraoperative monitoring including ECG, pulse oximeter, noninvasive blood pressure, and reading thus obtained were considered baseline.

All the patients received 3 mg per kg (0.075 mL/kg) of 4% lignocaine by nebulization with O2. Nebulization was done until the complete utilization of the drug. After that, the patients, according to the allotted groups, received i.v. clonidine 1 µg per kg diluted to 10 cc with normal saline or i.v. normal saline 10 cc given slowly 15 minutes prior to intubation.

Inj. glycopyrrolate (0.2 mg) and inj. butorphanol (1 mg) were given at the time of induction. Preoxygenation with 100% O2 was done for 3 minutes. Intravenous induction was done using propofol 2 mg per kg and succinylcholine (1–1.5 mg/kg). Laryngoscopy was done after 15 minutes of giving the study drug. Patient was intubated with an appropriate sized cuffed endotracheal tube by an experienced anesthesiologist. After checking the ventilation, anesthesia was maintained with 60% nitrous oxide in oxygen along with isoflurane and vecuronium.

At the end of the surgery, the anesthetic gas mixture was replaced with 100% oxygen to facilitate patient recovery. Patients were extubated after giving inj. neostigmine 50 µg per kg and glycopyrrolate 10 µg per kg. After extubation, patients were shifted to recovery room.

Side effects of the study drugs, such as xerostomia, drowsiness, skin rash, constipation, dry eyes, dizziness, and headache, were recorded and treated accordingly.

The data from the present study were systematically collected, compiled, and statistically analyzed with SPSS Statistics 26 version to draw relevant conclusions. The observations were tabulated in the form of mean ± standard deviation. For association between categorical variables, Chi-square test was applied. For parametric data, Student t-test was used. The level of significance was determined as p-values p <0.05 and p <0.01 as significant and p <0.001 as highly significant.

Age, sex, weight, ASA physical status, height, and duration of surgery were comparable in both the groups (p >0.05) (Table 1).

Baseline hemodynamic parameters were comparable in both the groups (p >0.05).

MAP was maximally increased after intubation in group B (Fig. 4).

MAP was significantly high (p <0.001) in group B from 1 minute after intubation and increased up to 2 minutes when compared with group A.

Hypotension was seen in three cases in group A and was treated with i.v. fluids and inj. mephenteramine 6 mg i.v. bolus. No hypotension was noted in group B. No side effects of study drugs were seen in both the groups. 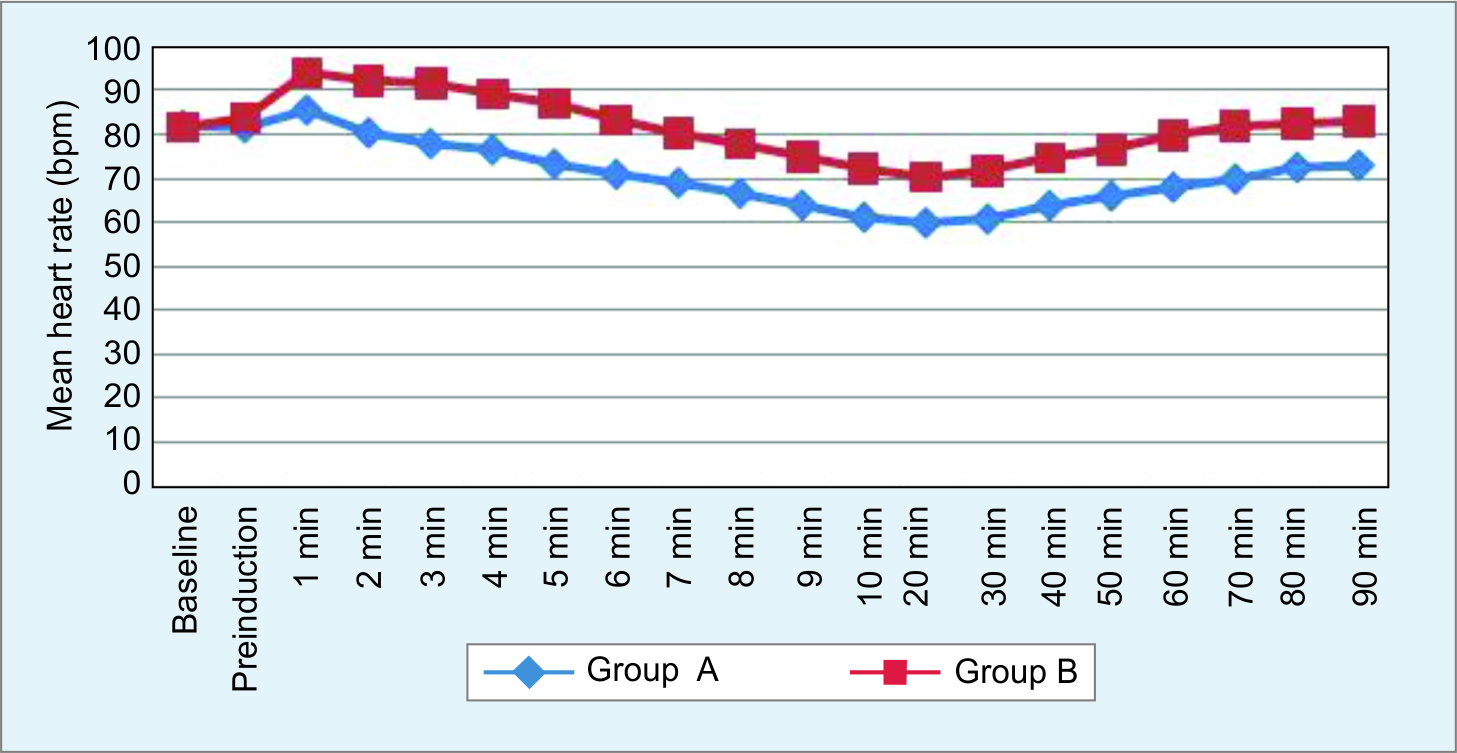 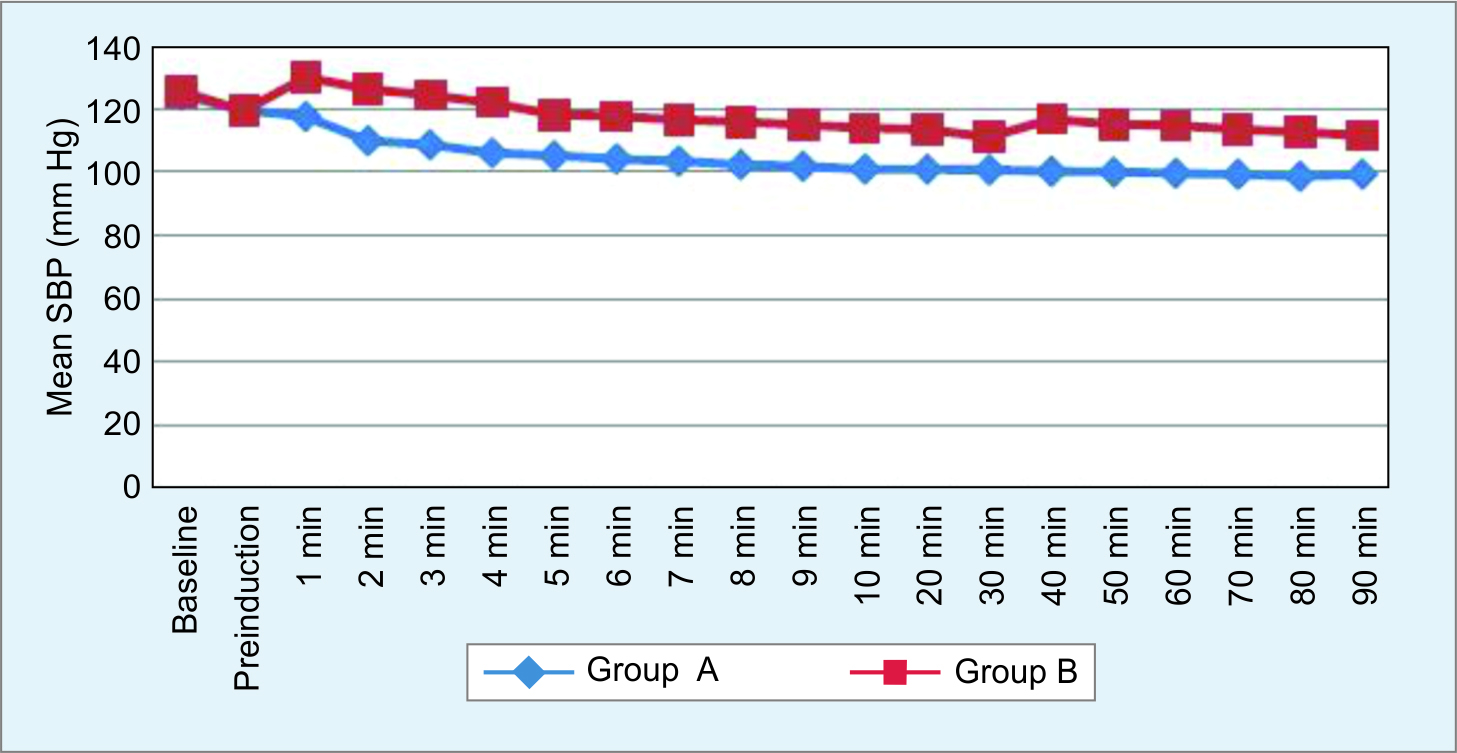 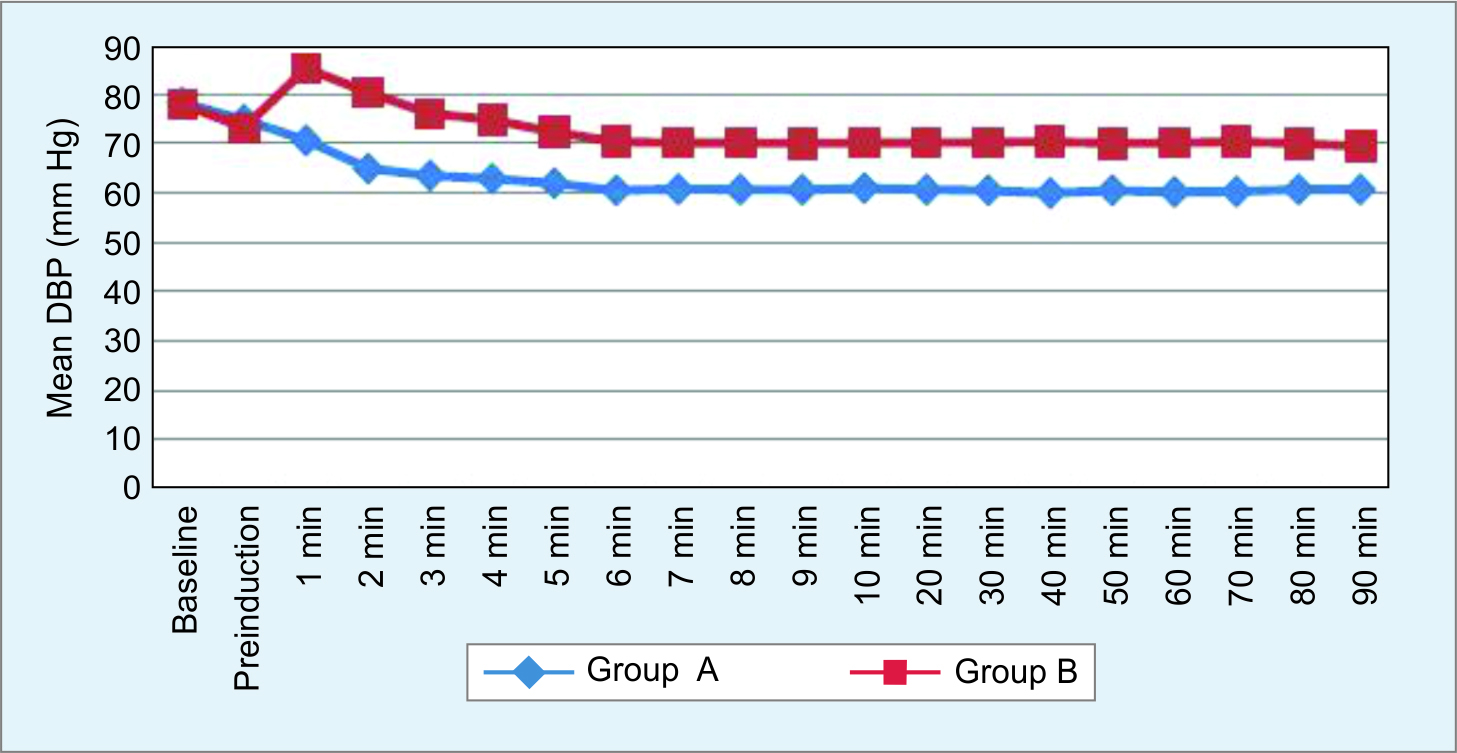 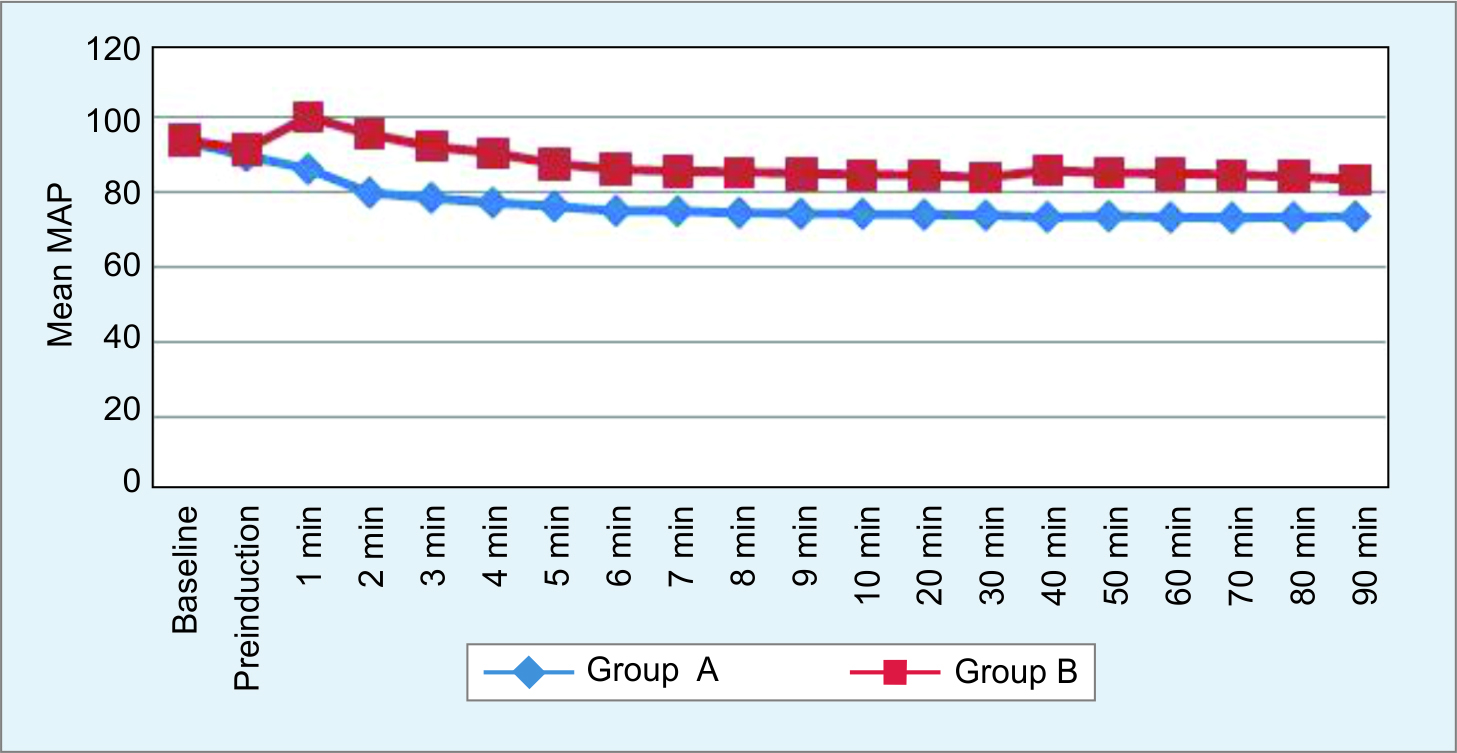 Hemodynamic response to laryngoscopy and intubation was not completely abolished in both the groups. Clonidine was much more effective in blunting the postintubation increase in both HR and blood pressures than nebulized lignocaine.

Soni et al., Cordeiro and D’Souza, and Arora et al. also found i.v. clonidine effective in blunting hemodynamic response to intubation.11–13 Marulasiddappa and Nethra in their study compared i.v. clonidine 2 µg per kg with i.v. lignocaine 1.5 mg per kg and found decrease of mean HR which remained below baseline at all times in the clonidine group.14 Kalra et al. showed that the preoperative administration of clonidine reduced the sympathoadrenal response and improved the hemodynamic stability with no consequential hypotension.15

Charan et al. observed the mean MAP was below the baseline value in the clonidine group. All the above findings were comparable to our study.16

Kulka et al. concluded that i.v. clonidine in a dose of 4 µg per kg significantly attenuated the hemodynamic and adrenergic reactions to stress response to laryngoscopy in coronary artery bypass grafting (CABG) patients, but side effects limiting the use of i.v. clonidine were observed. This may be due to a higher dose of clonidine used in their study, unlike our study in which we used 1 µg per kg.17

Nebulized lignocaine was not effective as all the hemodynamic parameters were significantly increased after intubation when compared with clonidine group.

Chinn et al. in their study demonstrated that up to 60% of lignocaine dose can be lost via nebulized route. The findings showed that a major part of the drug is lost to air and in patient’s mouth during nebulization. The inhalation method provides inadequate anesthesia of upper airway. Also it has been suggested that nebulized lignocaine partially inhibits the vagus afferent which may result in unopposed sympathetic outflow with increase in HR and blood pressure.18 These results were consistent with the studies done by Laurito et al. and Bunting et al.19,20

Contrary to the above findings, Acharya and Routray and Marulasiddappa and Nethra noticed that no side effects, such as hypotension and bradycardia, were observed in any of the patients when clonidine was given in the dose of 3 and 2 µg per kg, respectively.25,14

Acharya and Routray and Chhatrapati and Shitole found that clonidine in a dose of 3 µg per kg caused adequate sedation without respiratory depression, whereas in our study, sedation was not seen in any patient.25,26

To conclude, i.v. clonidine in a dose of 1 µg per kg administered 15 minutes before laryngoscopy and intubation was far superior to nebulized lignocaine alone in attenuation of the hemodynamic response.