Management of Rheumatoid Arthritis in Pregnancy: A Review Article

Rheumatoid arthritis (RA) is a chronic inflammatory condition, usually affecting females three times more than the males. The peak age of onset is in the childbearing age-group i.e., 19–44 years. Females with RA face difficulties at the time of conception, during pregnancy, and in the lactation period. Certain drugs used for the management of RA have deleterious effects on pregnancy outcomes. Thus, it is increasingly becoming a topic of concern as well as discussion for healthcare providers and medical professionals to guide the affected females in planning for pregnancy, safer pharmacotherapies, and to overcome the phobia related with their disease effects.

RA affects 0.5–1% of the adult population worldwide. Females are more commonly affected than males, which can be attributed to the role of estrogen in enhancing immune response. Genetic and environmental factors play an important role in the pathogenesis of RA.

RA affects the synovial tissue and underlying cartilage and bone. It results from a complex mechanism of genetic, environmental, and immunological factors. The hallmark of pathological process in RA is synovial inflammation, a proliferation of various cells, which include T-cells, B-cells, plasma cells, dendritic cells, mast cells, and granulocytes. Rheumatoid synovitis is characterized by focal bone erosion with thinning of reticular cartilage, leading to joint damage and disability. Other systems can also get involved, like lungs and cardiovascular system.2

Predominant clinical features include morning stiffness lasting for more than 1 hour, typically in small joints of hands and feet. Joints are usually swollen and tender on presentation. Joints affected are metacarpophalangeal, proximal interphalangeal, and wrists; the distal interphalangeal joint is not involved. Progressive and chronic irreversible deformities, such as swan-neck deformity, boutonniere deformity, and line deformity, result from damage to the tendons, joint capsule, and soft tissues in these small joints. Less common manifestations include acute monoarticular, palindromic rheumatism, and asymmetrical large joint arthritis. Spinal joints are very rarely involved.2

The PARA study, a prospective study was done taking into consideration strict criteria for disease activity found that pregnancy influenced the disease course more with moderate to high disease activity [DAS28- C-reactive protein (CRP) >3.2] and patients with low disease activity (DAS28-CRP <3.2) remained stable throughout the pregnancy.3 The maternal immune system undergoes a variety of changes in response to the tolerance of antigens of the conceptus, thus these immunomodulatory effects during pregnancy influence autoimmune rheumatic diseases, like RA. Immunomodulation can be attributed to endocrinal changes (increase in progesterone levels, leading to thymic involution and reduced proinflammatory profile4; fetal production of human chorionic gonadotropin, leading to recruitment of T regulatory cells)5,6 and changes in cell-mediated and humoral immunity.7,8

Management of RA has revolutionized in recent years. Availability of novel therapies, such as biologic agents, and treatment paradigms, such as “treat to target”, have substantially improved treatment outcomes for patients with RA. Unfortunately, data on the safety of many of these medications are limited, and many may be contraindicated during pregnancy and breastfeeding.9 Careful planning is thus required to stabilize disease activity prior to conception and modify medication regimens. There seems to be a prevalence of fewer children among women with RA than in the general population. These women also tend to have higher mean age at the first birth.10 For all women diagnosed with RA, it is important to get a reproductive history. For patients with childbearing potential, the desire to start or extend their family while on treatment should be ascertained. Women who are not currently interested in pursuing pregnancy but desire to conceive in the future should be appropriately counseled about the potential safety, risks, or teratogenicity of medications they are on for RA treatment.11

The clinical diagnosis of RA is largely based on signs and symptoms of chronic inflammatory arthritis. Application of revised European Alliance of Associations for Rheumatology (EULAR) criteria with a score of ≥ 6 fulfills the requirement of definitive RA (Table 1).

A detailed history of the problem, its onset, progression with time, relieving and aggravating factors, pattern of joint involvement and joint stiffness associated with inactivity, and improvement with activity points toward inflammatory joint disorder, such as RA, is assessed. The objective of clinical assessment is to identify signs of inflammatory arthritis, such as swelling, tenderness, and restriction of joint movements. Extra-articular manifestations include rheumatoid nodules, anemia, thrombocytosis, pleural effusion, pericarditis, and entrapment neuropathies.3 Nonspecific inflammatory markers, such as CRP and erythrocyte sedimentation rate (ESR), are elevated.

History of comorbidities, obstetric history, and family history of autoimmune diseases should also be elicited.

Management protocol in a case scenario of a female with RA who wishes to conceive, is pregnant, or is in the lactational phase needs comprehensive approach (Flowchart 1).

Rheumatologists and obstetricians must work in integration to educate the patients about the potential fertility issues; pregnancy outcomes in RA; disease activity during pregnancy and in the postpartum period; and medication use in the preconception period, during pregnancy, and lactation.

GOAL: Balance between good disease control and the risk of medications used.

Females with RA who are planning for pregnancy must be counseled thoroughly before conception due to the following reasons: 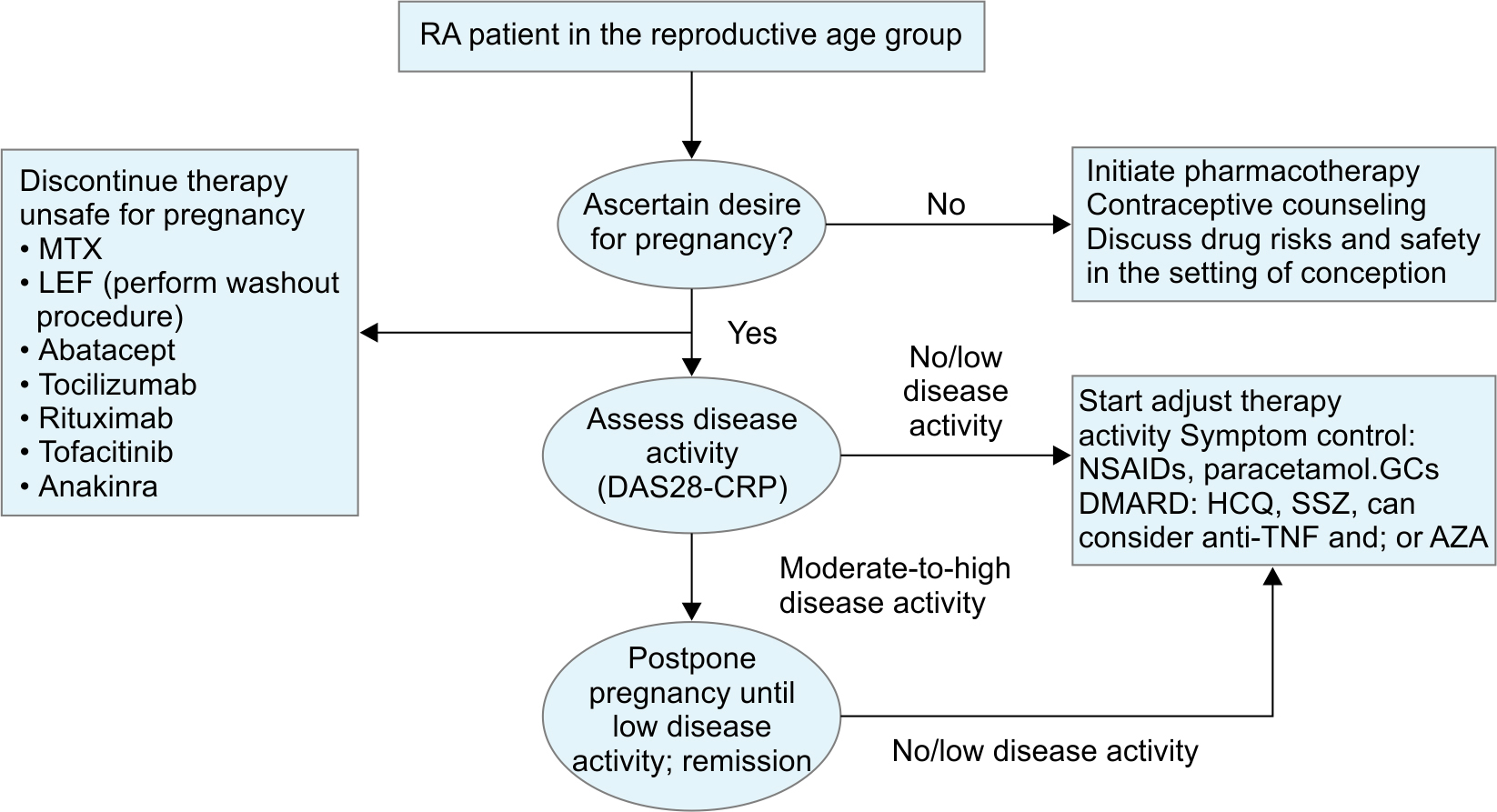 Flowchart 1: Algorithm in the management of RA in pregnant patients [Source: Management of rheumatoid arthritis during pregnancy: challenges and solutions (Krause and Makol)9]

Pregnancy outcome in patients with low disease activity and limited drug therapy is almost similar to healthy women. For patients who remain clinically quiescent in the postpartum period, the pregnancy medication regimen can be continued. For women who flare postpartum or who have a high likelihood of flaring, their prepregnancy regimen can be resumed with adjustment to medications for women who are breastfeeding. The demands of caring for a newborn can be particularly challenging in women with RA who are flaring in the postpartum period or who have restricted joint mobility. Patients with RA may need additional support or help during this time.

Perinatal mortality is rarely seen. The most common outcome is preterm (<37 weeks) delivery with increased risk seen in patients with high disease activity at conception or during pregnancy.33,34 The use of high-dose prednisone (>10 mg/day) is also associated with preterm delivery. Thus, prednisone should be either taken in a low dose or discontinued after the third trimester. Infants exposed to TNF-alpha inhibitors in utero should not receive live vaccines for the first six months of life (rotavirus and bacillus Calmette–Guérin to be avoided).35

SSZ may cause abnormalities in sperm count and function; therefore, semen analysis is recommended in patients who have a delay in conception.36 However, it is not associated with teratogenicity.

Other medications, like TNF inhibitors, immunosuppressive agents, and AZA, can be safely used.

Paternal use of methotrexate is not associated with teratogenicity, thus it need not to be discontinued.37 There are insufficient data on the safety of abatacept, tofacitinib, or tocilizumab.38

The best condition for a successful outcome is planned pregnancy with low disease activity, and preferably in the remission period. However, modification of treatment to minimize fetal toxicity while maintaining adequate disease control can be difficult in patients whose RA flares or remains active during pregnancy. Therefore, disease activity should be monitored throughout the pregnancy for timely interventions as and when required.

Thus, an integrated approach is needed to address the difficulties being faced by the females in the course of pregnancy outcomes right from the preconception period to the lactation phase. This includes detailed patient counseling prior to therapy initiation and planning of pregnancy, adjusting therapy, and regular monitoring during pregnancy.