The degenerative form of encephalocele is termed as atretic cephalocele, which can be primarily seen in infants in the form of cystic mass lesion in the head. Patient generally presents with midline scalp swelling. It is usually characterized by the presence of many associated underlying intracranial malformations; therefore, prognosis varies. A 1-year-old girl child presented with a midline painless scalp swelling in the occipital region since 6 months which progressed gradually. The child otherwise was asymptomatic with normal developmental milestones. Magnetic resonance imaging findings revealed midline extra-axial altered signal intensity lesion in the occipital region with no underlying parenchymal extensions. Lesion is causing smooth scalloping of inner table of occiput. There is minimal enhancement on postcontrast images with no dural venous sinuses communication.

Cephalocele is described as a congenital skull vault defect with associated herniation of underlying intracranial structures, prevalence varying from 1 in 3,500 to 1 in 5,000 live births.1 Atretic cephaloceles are the uncommon neural tube defects that account for 37.5% to 50% of all encephaloceles. Atretic encephalocele contains meninges and the neural rests. Encephalocele is the pouch constituting the central nervous system tissue and if it contains meninges and cerebrospinal fluid, it is described as a meningocele.2

Atretic cephalocele is a form of encephalocele which underwent degeneration and is seen favorably in infants as a cystic scalp swelling.3 Atretic cephalocele is commonly associated with various cerebral anomalies of different midline structures.1 A careful examination of the cerebral structures must be performed in such patients with the help of CT or MR imaging, as they are sometimes associated with underlying cranial malformations.1,4

A 1-year-old female child presented with a midline swelling in the posteroinferior aspect of the scalp. Parents noted the swelling in early infancy and gave history of gradual and progressive increase in its size. Child was asymptomatic with normal developmental milestones. On the local examination of swelling, it came out to be soft and mobile, which was nontender, nonpulsatile, and nonreducible, and there was no variation in its size on Valsalva maneuver. Swelling was covered with hairs and measured about 2–3 cm in size. Her magnetic resonance imaging (MRI) was done, which revealed a midline extra-axial altered signal intensity lesion in the occipital region. Lesion appeared bilobed and was causing smooth scalloping of inner table of skull with broad-based extraosseous subcutaneous component in the occipital region (Figs 1 and 2). No intraparenchymal extension was noted. On postcontrast imaging, there was minimal enhancement of the lesion (Fig. 3A). No obvious communication with underlying dural venous sinuses is noted on MR venography (Fig. 3B). Patient was treated surgically, and the cystic lesion was excised successfully. Patient had an uneventful recovery. No recurrence was observed after that. 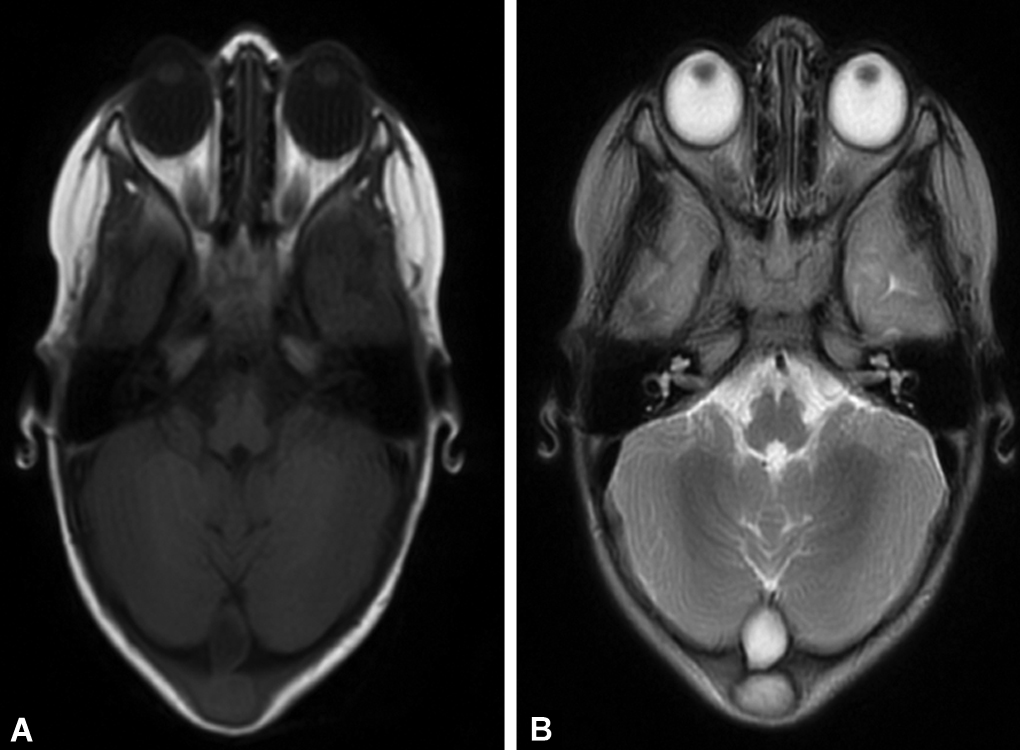 Fig. 1A and B A 1-year-old female child presented with midline painless scalp swelling in the occipital region. Axial T1 WI (A) and T2 WI (B) showed that a midline extra-axial altered signal intensity lesion in the occipital region appears isointense on T1 WI and hyperintense on T2 WI following CSF signal. It was bilobed in appearance and causes smooth scalloping of the inner table with broad-based extraosseous subcutaneous component 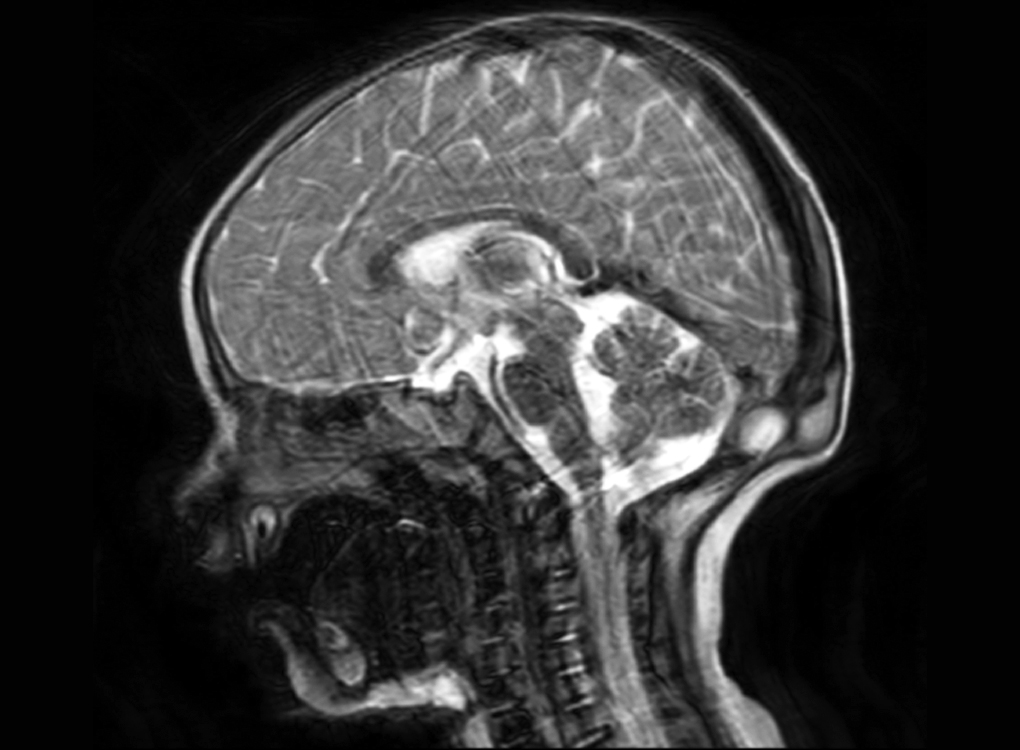 Fig. 2: Sagittal T2 WI of the same patient showed the bilobed nature of the lesion appearing hyperintense and caused smooth scalloping of the inner table of the occiput 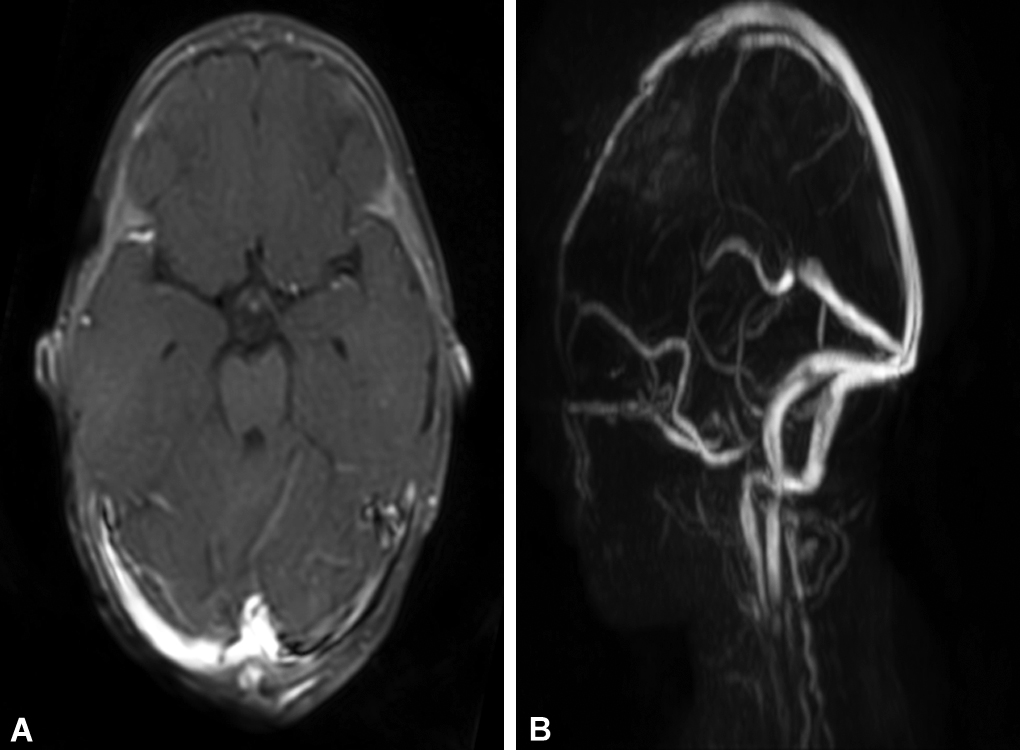 Fig. 3A and B On axial postcontrast image (A) of the same patient, there was minimal enhancement of the lesion with no obvious communication with underlying dural venous sinuses on MR venography; (B) No brain parenchymal extension was observed

James and Lass-mann were the first to describe atretic encephalocele in the year 1972 as the term “meningocele manque,” which was defined as a degenerative encephalocele.3 Atretic cephaloceles are tiny subscalp lesions which are covered by the skin and usually contain meninges and neural and glial rests. Other causes of scalp swelling in a child consist of sebaceous cyst, lipoma, inclusion cyst, hemangioma, bony and soft tissue infections, traumatic lesions, and tumors such as Langerhans cell histiocytosis and sarcomas.1

Numerous hypotheses have been suggested to elucidate their origin. It can be one of the less common form of cranioschisis. There can be associated cranial bone defect which occurs secondary to the inability of interpositioning of mesoderm in between the neural and cutaneous ectoderm.1

Atretic cephalocele was further categorized as type 1 and type 2. In type 1, arachnoid tissue is covered by the dura which is found preferably at the stalk of the lesion, whereas in type 2, ectopic foci of glial or neural elements is observed. Majority of cephaloceles are covered by the skin, although the overlying skin surface can be varied accordingly. There can be alopecic lesions or there can be unrestricted hair growth over the cystic lesion.4 Atretic cephalocele generally occurs near the lambda— 50% can fall in the parietal region and 50% can be occipital in location.2

The outcome of cephalocele can vary, depending on its location, presence or absence of cerebral anomalies, and many other factors such as if it occurs in parietal lobe, it is routinely accompanied by anomalies in the orbit as well as in the brain, and prognosis is generally poor in these patients. On the counterpart, in occipital cephalocele, defect is present between lambda and bregma and brain abnormalities are usually not seen.3

Cephaloceles can also be determined by antenatal ultrasonography examination but as they sometimes are very small in size, so can be easily missed. Moreover, because they are very rare too, they are generally not expected by the examiner.1 Majority of the cases with encephalocele are only postnatally diagnosed and many of them show several characteristic key features on postnatal MRI examination.2

Prenatal ultrasonography can detect the vast majority of cases, but neonatal MRI will not only help to reach the definitive diagnosis but also to establish the prognosis by clearly revealing the underlying structural involvement and the presence or absence of hydrocephalus.5 Fetal and neonatal MRI are useful in detecting the bilateral symmetrical enlargement of parietal foramina, generally associated with atretic encephalocele, whereas in case of occipital encephalocele there is a single lesion located in the occipital region.6

A well-defined elongated or oval-shaped skull vault defect is seen on the skull radiographs at the site of encephalocele. On CT, it will be seen as a lesion with density isodense to CSF or as minimally hyperdense to brain tissue. On contrast administration, atretic cephalocele will enhance brightly.2 MRI is the best imaging modality to delineate this entity.7 The frequent use of MRI and angiography could possibly improve the definition of these anomalies and delineate the underlying malformations especially in the dural venous sinuses.8 Upon imaging, an atretic cephalocele can be seen as a subscalp cystic lesion with an associated underlying calvarial defect.7

In our case, MRI findings reveals a midline altered signal intensity extra-axial lesion in the occipital region which appeared isointense to cerebrospinal fluid (CSF) on T1 weighted imaging (WI) and T2 WI with suppression on fluid attenuated inversion recovery (FLAIR) sequences (Fig. 1). The lesion was bilobed and showed smooth scalloping of the inner table with broad-based extraosseous subcutaneous component in the occipital region with no parenchymal extension. No diffusion restriction was noted on diffusion weighted imaging (DWI) images. No blooming was seen on T2W fast field echo (FFE) images. On postcontrast imaging, there was minimal enhancement of the lesion with no obvious communication with dural venous sinuses (Fig. 3).

For infants who present with painless cystic scalp swelling, it is important to differentiate all the differential diagnosis of cystic scalp swelling, such as lipoma, dermoid cyst, sinus pericranii, and cephalocele. After a complete clinical evaluation of patient, neurological and radiological examination should be performed, with MRI being the imaging modality of choice for early and correct diagnosis of the underlying entity.