Foreign bodies in the vagina and reproductive tract have been reported by clinicians, though are quite rare. As the externally evident foreign bodies might arouse the suspicion of an assault, but many times the presenting symptom might be a foul-smelling discharge, uterine bleeding, uterine mass-like features, or penetration of the object into the surrounding viscera. Child abuse and psychiatric illness in adults might be the other causes of such an entity. Foreign bodies, when multiple, then thorough exploration of the entire genital tract is justified. The management of such patients becomes challenging as many times they get epithelized with granulation tissue growing around and attempt to remove them might cause perforations and fistulous communications with other organs. Careful inspection and retrieval under anesthesia remain the key. We present here a case of a middle-aged woman with multiple intravaginal foreign bodies. The approach and challenges in management are discussed.

Foreign objects in the reproductive tract are encountered by clinicians in all age groups. Patient usually presents with complaints of foul-smelling, unremitting discharge, and irregular vaginal bleeding. She may also complain of pain and urinary discomfort. Long-standing foreign bodies in the vagina may cause vesicovaginal fistula and urinary incontinence.1,2 It can be a diagnostic dilemma, especially with suspicion of carcinoma cervix. Detailed history and clinical examination helps in diagnosis and proper management and hence can prevent morbidity and mortality resulting from complications. We report a case where bizarre objects were recovered from the vagina without the patient being aware or admitting their presence inside the body.

A 45-year-old multipara patient reported to our outpatient department with complaints of pain lower abdomen, irregular vaginal bleeding, and foul-smelling discharge for past 6 months. She also complained of fever, nausea, and vomiting for past 3 days. The patient was married for past 15 years and had two normal vaginal deliveries with her younger child 10 years old. She was working as a helper in a school. She denied history of any marital discord or any physical assault by her husband. There was no history of any legal or illegal abortion. She denied history of any intentional insertion of foreign bodies or any foul play or any sexual assault. She was taking treatment of vaginal discharge and irregular bleeding per vaginum from some local practitioner, records for which were not available. On examination, she was poorly built, poorly nourished, ill oriented to time, place, and person. She looked bewildered, mentally affected, and disoriented to the hospital surroundings. Her general physical examination and abdominal examination did not reveal any significant findings. On local examination, there was intensely putrid and foul-smelling discharge coming out from vagina and some metallic black colored porky and pointed object could be seen coming out through introitus. On per vaginum examination, the metallic object was taken out and it was a hairpin, thereafter multiple foreign bodies (n = 37) like spoon, nails, hairpins, locket, stones, cotton pieces were taken out of the vagina (Fig. 1).

Fig. 1: Metallic object taken out of the vagina

Few foreign bodies were found impacted in the posterior fornix and right lateral vaginal wall. Her urinary tract was found intact and P/R examination showed intact rectal mucosa. She was admitted and was put on parenteral antibiotics. An ultrasound of the pelvis revealed some echogenic focus in the vagina (? foreign bodies) but the uterine body and cervix did not reveal any object inside. After 48 hours of antibiotic coverage, the patient was taken up for examination under anesthesia and a nail cutter, which was impacted in right lateral vaginal wall, was removed with the help of artery forceps. In addition, a stone and a rubber and metallic tubing were also removed (n = 3) (Fig. 2). 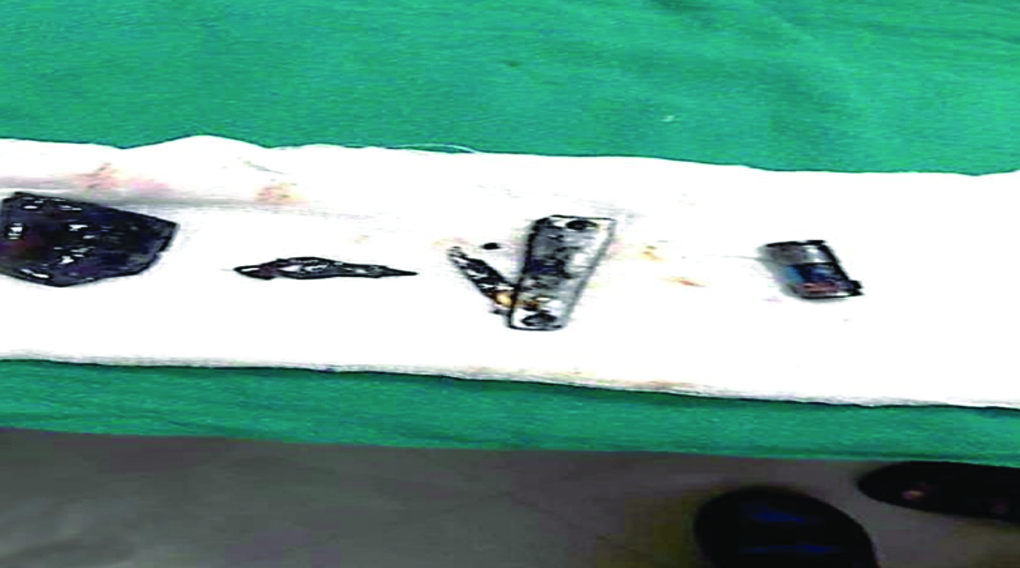 Vaginal mucosa was congested and lacerated at places and blood-stained foul-smelling discharge was present. Bimanual examination revealed a normal size of the uterus and no adnexal mass was felt. Liberal vaginal irrigation with povidone-iodine was done. The patient was continued on intravenous antibiotics and regular vaginal douching with povidone-iodine was done for 5 days. The patient was discharged on 6th day. A strong suspicion of a psychiatric illness was kept in mind and her general physical examination, mental appearance, behavior, and unusual presentation warranted a psychiatric opinion. The preliminary examination revealed her abnormal looks and behavior with mental dementia. However, no sadistic behavior was identified and no psychiatric treatment was advised.

Foreign objects in the genital tract may be placed accidentally or intentionally. Prolonged retention of these objects may result in bleeding or offensive vaginal discharge.3 Patient may also complain of pain if the size of the object is larger than the size of the introitus or it has sharp or irregular edges. Long-standing foreign bodies can also lead to vesicovaginal fistula, fibrosis, and adhesions. It can also cause stenosis of the vagina.4 Foreign bodies in the vagina are commonly seen in children and one should exclude the possibility of child sexual abuse. Adolescent girls may present with forgotten tampoon. In adults, vaginal foreign bodies may be a part of sexual abuse or used to induce abortion illegally. In some cases, women can have altered awareness, dementia, or memory loss and may be involved in substance abuse. This patient although was having low intelligence and had no awareness of these objects and she had total denial for this action (Fig. 3). 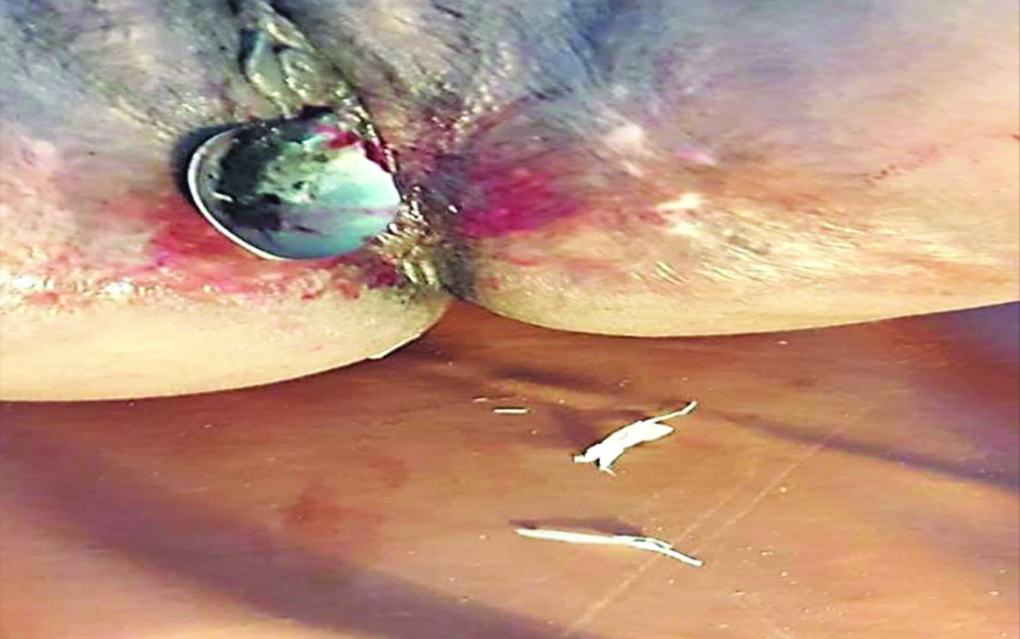 Fig. 3: Spoon coming out of the introitus

Among adults, commonly recovered foreign objects from the genital tract include pessaries, contraceptive devices, tampoon, seeds, or sexual aids retained inadvertently.5 They can be diagnosed by taking a detailed history, clinical and gynecological examination, X-ray pelvis, or ultrasound examination. For deeply impacted foreign bodies, 3D multiplanar CT scan may be needed.6 MRI is also helpful in the localization of nonmetallic objects missed by ultrasound and radiological studies.7 Continuous flow vaginoscopy with a 4 mm hysteroscope under general anesthesia is also useful in the detection and management of the vaginal foreign body.8 In adults, foreign bodies lying free can be removed from the vagina in OPD setting with proper visualization of the foreign body carefully to avoid injury to tissues. In our patient also, 37 foreign bodies were removed in OPD. Unusual impacted objects or those that may disrupt the vagina or cervix require removal under anesthesia after proper antibiotic coverage. So in our patient also three impacted foreign bodies were removed by exploration under anesthesia after antibiotic coverage. In cases where there has been invasion into contiguous anatomies, specific repair procedures may have to be undertaken.

Foreign bodies in the vagina can be encountered in females of all age groups and patients may not be aware of their presence. If retained for a prolonged duration can lead to life-threatening complications which can be prevented with early diagnosis and proper management. Specimen of foreign bodies is preserved for forensic and obstetrical evidence.