An implant-supported prosthesis offers a more predictable course of treatment as compared to other options available for rehabilitating edentulous arches and dental implants are a more acceptable treatment option to the dental fraternity and the public. Atrophic maxilla can be managed well utilizing autogenous bone grafts from intraoral donor sites, and the primary objective of this case was to use osseodensification as a means of acquiring more bone volume/density. We combined the use of three techniques, i.e., autogenous bone graft from symphysis, osseodensification drilling for implant placement, and Toronto prosthesis for rehabilitation of atrophic maxilla in a 35-year-old male patient. After 1 year of follow-up, the implant-based prosthesis is working well without any complication and established that autograft followed by osseodensification and rehabilitation with Toronto bridge gives good results. Block grafting followed by implant placement with osseodensification technique and Toronto prosthesis yielded great aesthetics and functional results.

Long-term edentulism, trauma,1 and/or congenitally missing teeth often lack sufficient bone height and width for successful osseointegration of dental implants.2 Unfavorable maxillomandibular relationship contributed by an unfavorable pattern of ridge resorption requires angulations of the implants and/or angled abutments and affects the proximity of adjacent facial concavities (maxillary sinus, nasal cavity) and vital structures (mandibular nerve).3 In the first year, bone loss after tooth extraction is usually dramatic and irreversible and more prominent. Clinical experience has shown that the minimum required dimensions of bone include a ridge width of 5 mm, allowing for bone on the facial and lingual aspects of the implant, and a vertical bone height of 7–10 mm.

Bränemark et al. in 1975 described the procedure of autologous bone grafting for dental implants that include intraoral sites, like maxillary tuberosity, palate, zygomatic arch, and mandibular coronoid process due to surgical morbidity associated with the extraoral donor sites.4,5 Bone obtained from mandibular symphysis and ramus is of intramembranous type, which undergoes less resorption as compared to endochondral bone. An additional advantage of these intraoral sites includes that the harvest can be performed in the same operating field and done on an outpatient basis under regional anesthesia.6

Combining advantages of both screw-retained and cement-retained prosthesis led to the development of “Toronto prosthesis” described as “abutment-hybrid overdenture” for final rehabilitation. It has implant emergence that can be corrected and a screw hole of each crown that can be fabricated in an esthetically and functionally acceptable area. Drawbacks include complex and expensive fabrication as compared to the conventional prosthesis.8

A 35-year-old male reported to the Department of Oral and Maxillofacial Surgery, Sri Guru Ram Das Dental Science and Research, Amritsar, with a chief complaint of missing upper front tooth for the last 6 months, which got avulsed due to trauma. However, the patient reported no history of any jaw bone fracture. There was no significant history of any chronic systemic disease. Teeth numbers 14, 13, 12, 11, 21, and 22 were missing whereas teeth 15, 16, and 18 were grossly carious, and endodontic treatment was advised for tooth 23. A long-span fixed partial denture from tooth number 46 to 37 was used to rehabilitate mandibular missing teeth by his previous dentist. A substantial amount of hard and soft tissue was lost due to trauma. On ridge mapping the width of bone in the region of missing teeth, it was less than 3 mm, which was insufficient for implant placement. A cone-beam computed tomography (CBCT) of the maxilla and mandible was advised to get a precise view. CBCT showed that the amount of alveolar bone width at the edentulous site was insufficient for the successful placement of implant of appropriate dimension (Fig. 1). Evaluation of the transplannar images of mandibular symphysis was done to assess the feasibility of harvesting required bone blocks. Labiolingual thickness and position of the mental nerve were found to be favorable.

Under local anesthesia, a surgical procedure was planned after obtaining a written consent from the patient. As labiopalatal dimensions were insufficient in the maxillary anterior teeth region for implant placement, onlay block grafting was planned (Fig. 2). Mandibular symphysis was selected as a donor site. 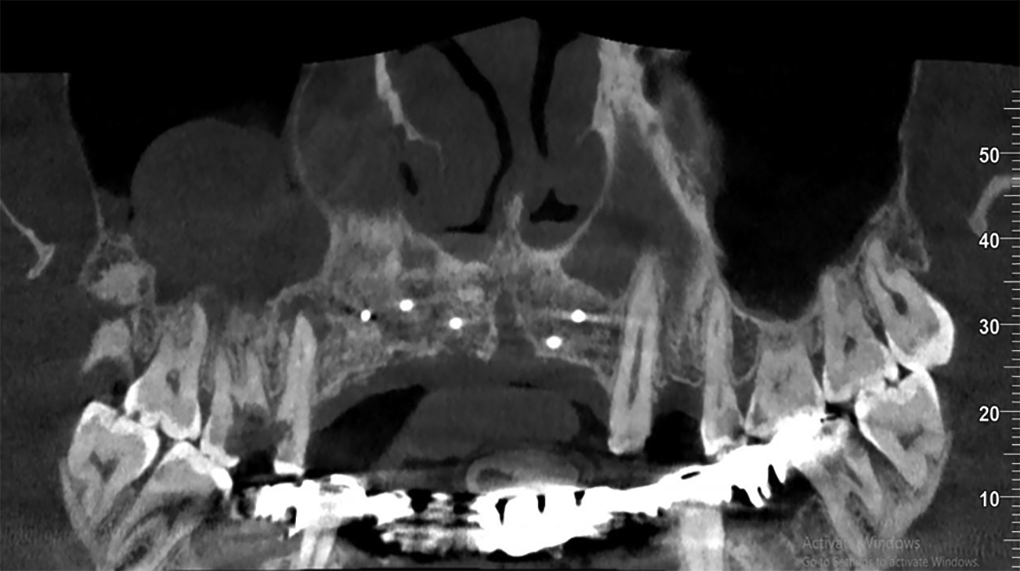 Bilateral inferior alveolar nerve blocks (Lignocaine 2% with adrenaline 1:100,000) were given followed by vestibular incision on labial aspect of mandible extending from mesial aspect of right lower premolar to the left one. Two releasing incisions were given to reflect the mucoperiosteal flap. A 10 × 10 mm outline was marked on both sides of the symphysis to harvest two separate bone blocks. A piezosurgical unit was then used to harvest the bone block with a minimal thickness of 4 mm (Fig. 3). The osteotomy site was filled with Osseograft (DMBM—xenograft), and the flap was sutured with 3-0 silk. 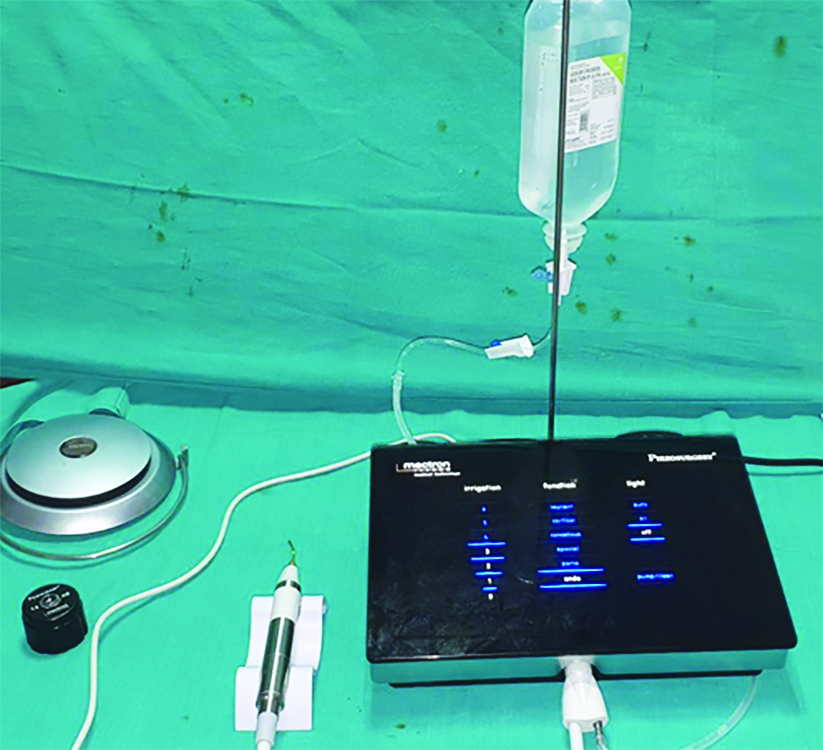 Placement of Block Grafts at the Recipient Site

The recipient site was perforated with fissure bur to induce bleeding and promote revascularization of the graft. Harvested blocks were adapted to the recipient site in region of 11, 12 and 21, 22 and were held in position with four self-tapping titanium screws (diameter: 2 mm, length: 10 mm). Space between the block graft and recipient site was filled with Osseograft (DMBM—xenograft). Absorbable collagen membrane (HEALGUIDE™) was used to cover the area. Interrupted 3-0 vicryl sutures were placed to close the site. Analgesics were prescribed along with postoperative instructions to the patient. Soft tissue healing was uneventful at both sites. 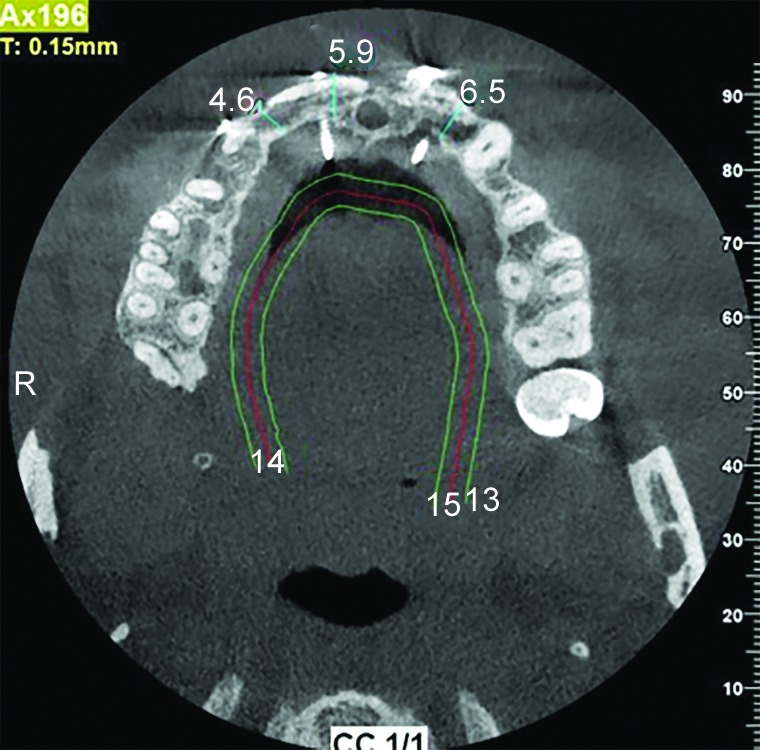 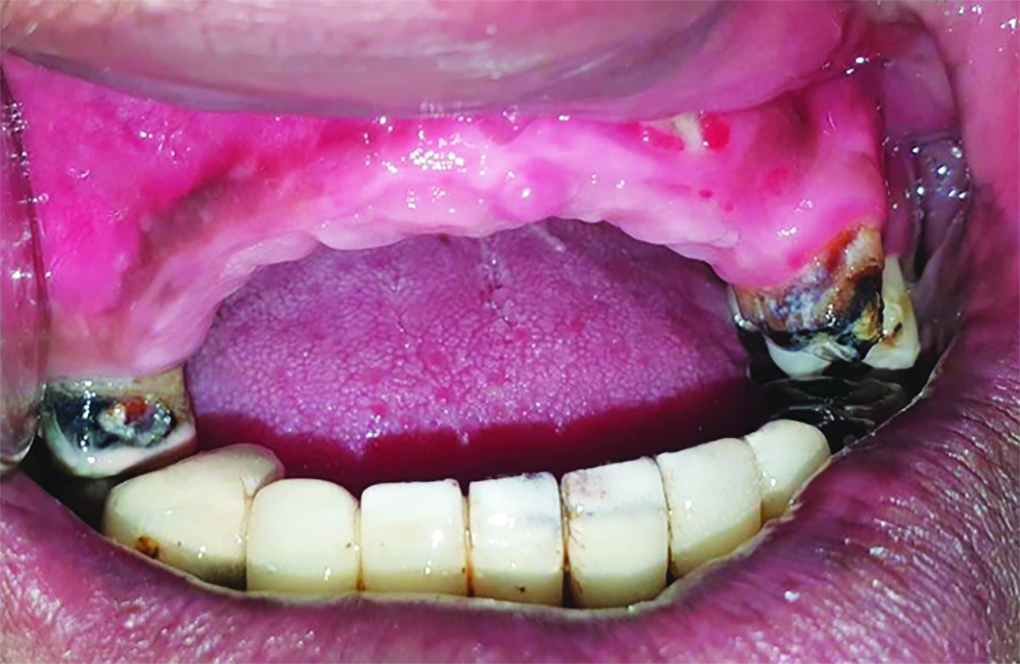 The second-stage implant surgery was done 6 months later after successful confirmation of osseointegration of all three implants as clearly shown in intraoral periapical (IOPA) (Fig. 9) and orthopantomogram (OPG) (Fig. 10). Healing abutments were placed on all three implants after removing cover screws, for a period of 15 days (Fig. 11). Maxillary impression was made using the closed technique. A mesostructure with multiple individual abutments was made by casting. After confirming clinically passive fit of structure individual metal-ceramic crowns were made. For replicating soft tissues, the mesostructure was ceramized in pink. The mesostructure was screwed on implants and was given a final torque of 30 N cm−1. Metal ceramic crowns were cemented, and excess cement was removed.

The case is being followed for the last 1 year after prosthesis placement, and no complication has been reported till now. To our knowledge and literature search, this is the first reported case with block grafting, osseodensification drilling, and Toronto bridge used in a single patient (Fig. 12). 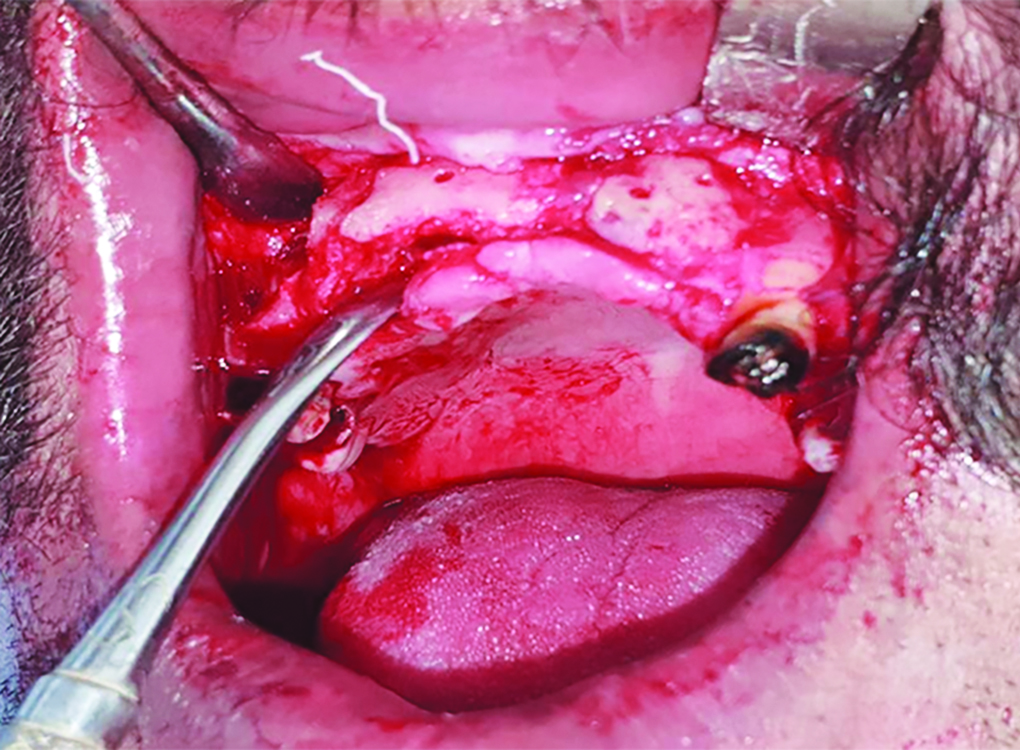 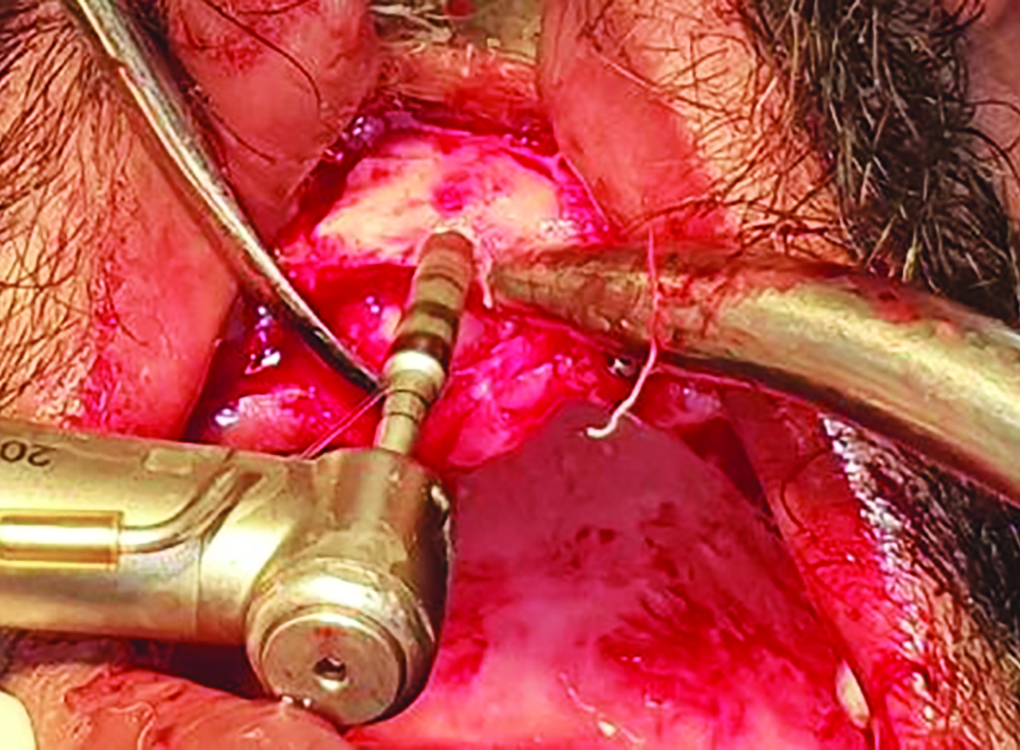 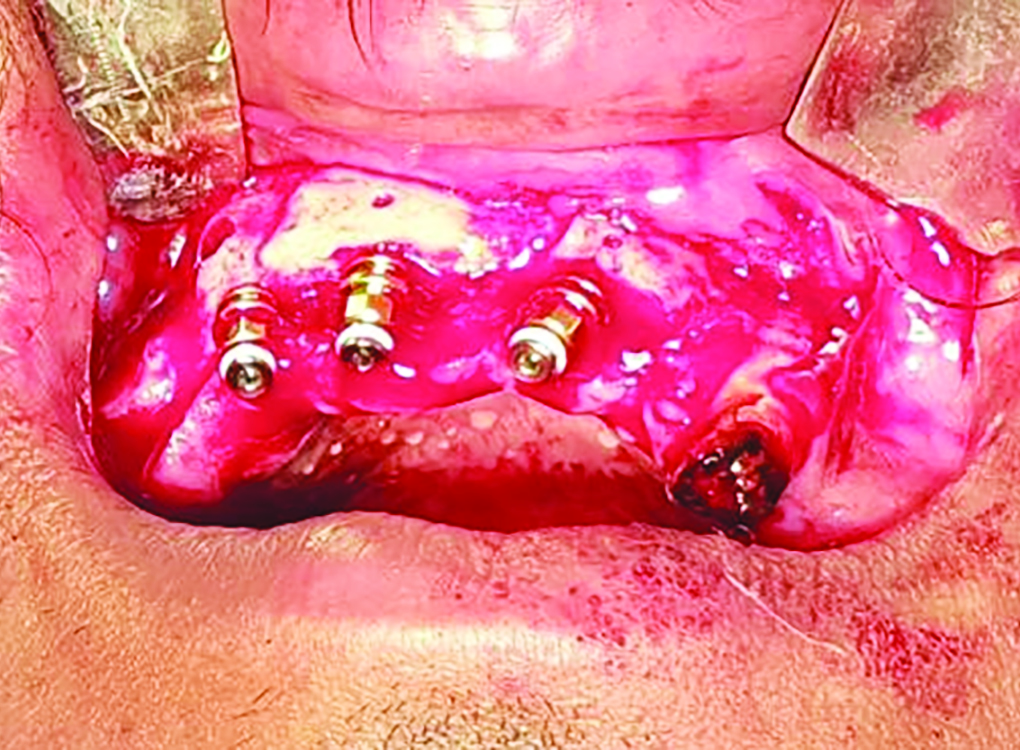 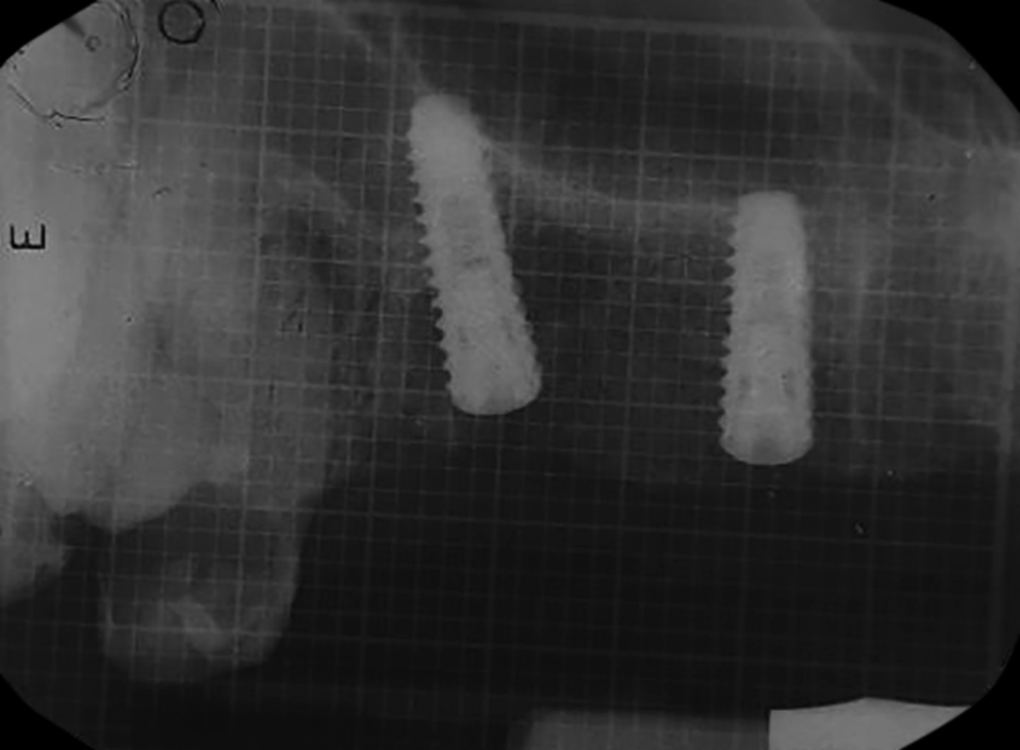 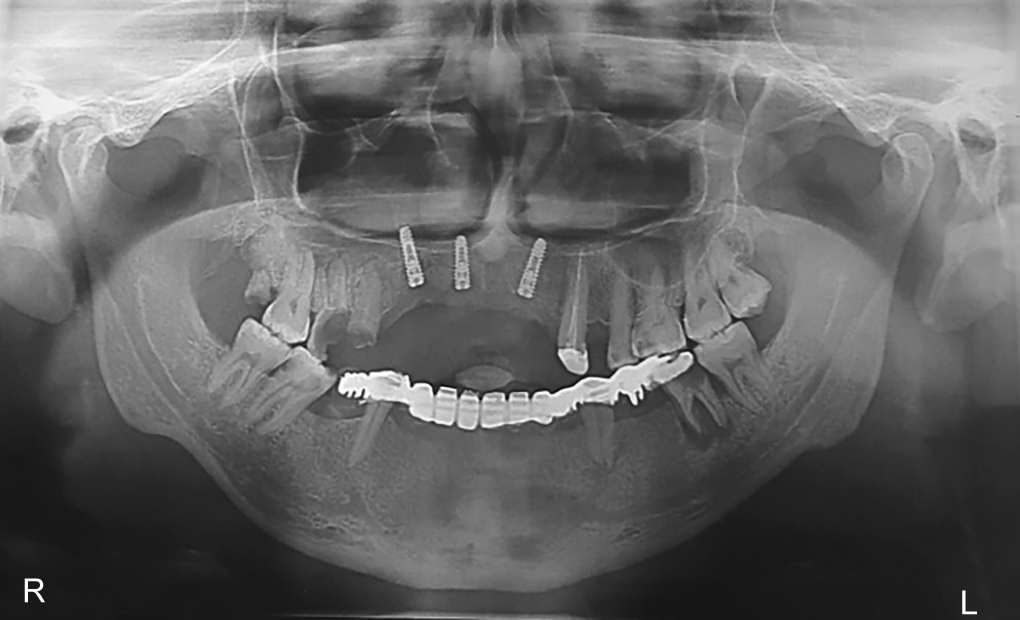 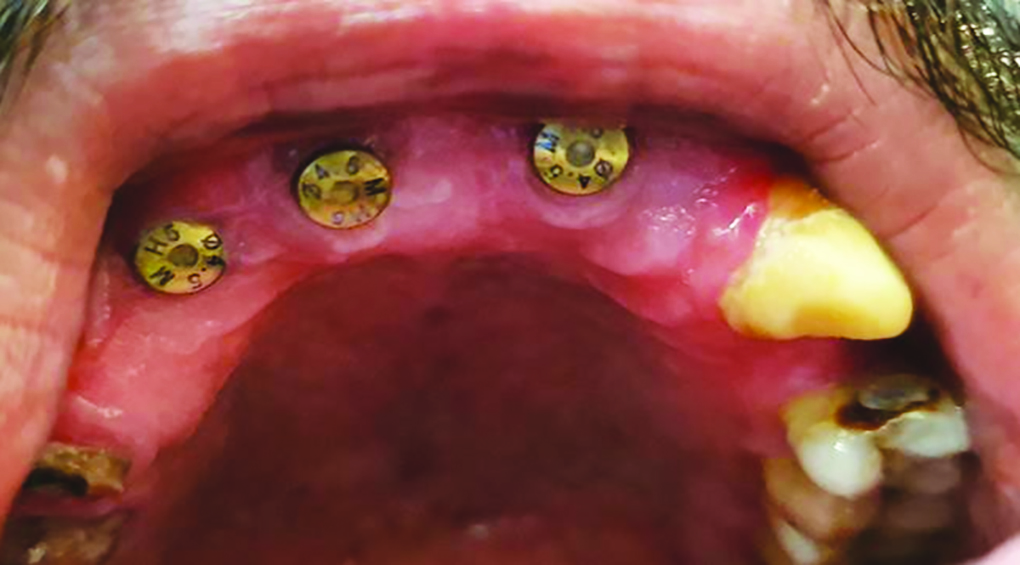 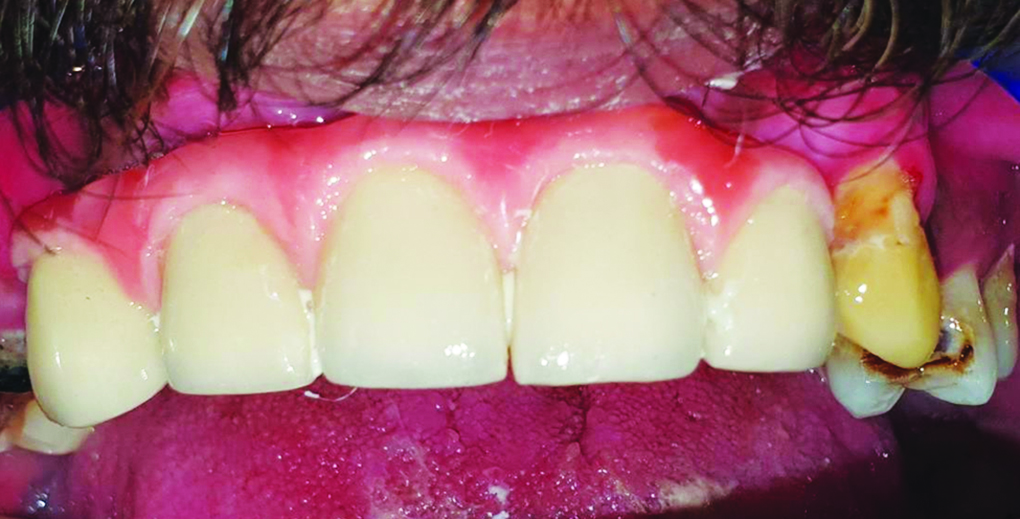 Based upon computed tomographic evaluation, the average dimensions of bone blocks that can be harvested from the region of mandibular symphysis region are 32.7 mm in length, 4.87 mm in width, and 4 mm in thickness. Though symphysis cannot provide bone for grafting of the entire arch, it can certainly provide adequate bone for grafting of two to six teeth.11 Symphysis region certainly provides thicker and larger grafts as compared to mandibular ramus region, resulting in better clinical outcome in alveolar ridge augmentation. In the present case, two bone blocks of dimension 10 × 10 × 4 mm were harvested from the symphysis region, which were adequate for ridge augmentation of anterior maxilla. Additional benefit of using symphysis as a donor site is that it can be reused for second bone block harvesting after a waiting period of 5–6 months between two harvesting procedures from the same area, suggesting that it is a renewable reservoir of high-quality bone.12

To overcome the limitation of sensory disturbance in symphysis during autogenous bone block graft using piezoelectric surgery can be used that reduces the risk of damaging surrounding soft tissues and important structures, such as nerves and vessels.13 Altiparmak et al. reported temporary paresthesia in 38.5% of cases in which block was harvested using conventional surgery, while only 3.2% of cases performed with piezoelectric surgery reported temporary paresthesia.14

It is a well-documented fact that autogenous bone blocks exhibit a variable degree of resorption during the healing phase.15 Antoun et al. noted that combining symphysis bone graft with membrane limits the resorption rate of harvested graft significantly as compared to cases where the graft is placed alone. Usage of non-resorbable membranes can lead to complications, such as membrane exposure, that can affect regenerative outcomes.16 Using a combination of resorbable barrier membranes, such as collagen membranes, along with particulate bone grafts with autogenous bone blocks can limit the resorptive changes.17 In the present case, Osseograft (DMBM—xenograft) with collagen membrane was used along with symphysis bone block.

In bone deficient regions, standard implant drills can cause buccal and lingual bone dehiscence contributing to low primary stability.19 Osseodensification introduced by Huwais S is a bone additive technique, which densifies bone. It preserves bone and condensation during osteotomy preparation, thereby increasing the bone density in peri-implant region. It preserves the bone bulk, increases density, and shortens the healing time.

The specialized drills are used in an anticlockwise direction (densifying mode) with pumping motion (in and out movement) creating dense compact bone along the osteotomy walls. Also, it helps in ridge expansion while maintaining the ridge integrity. Gaikwad et al. in their meta-analysis of animal studies demonstrated that osseodensification significantly improved insertion torque of implants during placement, as it improves the bone density in the prepared osteotomy sites. Also, the histomorphometric analysis showed that it significantly improved bone-implant contact and bone area frequency occupancy due to the presence of autogenous bone fragments in the osseodensified osteotomy sites.20 Koutouzis et al. noted that osseodensification caused ridge expansion along with higher insertion torque and ISQ in thin ridges. They also recommended that in a situation where alveolar ridge at the crest is only 3–4 mm thick, tissue volume should be developed with guided bone regeneration (GBR) before osseodensification. Hence, in the present case, GBR was performed before osteotomy expansion with osseodensification was done.21

In the present case, prosthetic rehabilitation was done with the Toronto bridge technique or abutment-hybrid technique.8,22 It was first described by Rajan and Gunaseelan for fabrication of retrievable combined cement- and screw-retained prosthesis for the single-tooth implant-supported prosthesis.23 As it is a combination of screw- and cement-retained prosthesis, it allows easy retrievability of abutment and removal of prosthesis for cleaning of excess cement. Toronto prosthesis is indicated for cases demanding esthetics, excessive interocclusal space present for which vertical bone grafting is not possible.24 It can be used for restoring single tooth, partial, or completely edentulous arch. It prevents loss of fit of the framework due to refiring and shrinkage caused by porcelain.

Variants available for Toronto prosthesis include the use of casting zirconia, CAD–CAM milled titanium framework and the use of gingiva-colored framework for masking gingival part of the framework.22–24

The inability to restore width and vertical height in deficient maxilla leads to lack of prosthetic rehabilitation in such cases. Block grafting from symphysis followed by implant placement with osseodensification technique and Toronto prosthesis yielded great aesthetics and functional results.